Looking at this week’s key events, Deutsche Bank’s Craig Nicol writes that while the unpredictable nature of US-China trade developments will likely continue to be the main focus for markets again next week, we also have the European Parliament elections circus to look forward to as well as various survey reports including the flash May PMIs which may offer some insight into the impact of trade escalation on economic data. The FOMC and ECB meeting minutes are also due, along with a heavy calendar of Fed officials speaking.

The European Parliament elections will kick off next Thursday with voting continuing into the weekend across the continent, with results expected on Sunday. With the elections surrounded by internal and external challenges for the EU, members divided on issues ranging from migration, digital taxation to EMU reforms, and Eurosceptic and anti-European groups challenging the EU’s integrity and credibility across the continent, the results will likely be closely watched by markets,  particularly given the real possibility that anti-EU parties could win enough seats to disrupt legislative business as opposed to just rallying against it. DB’s UK economists note that current polling data suggests that the vote could see large swings away from the two major parties and towards the newest UK parties (Brexit Party and Change UK). 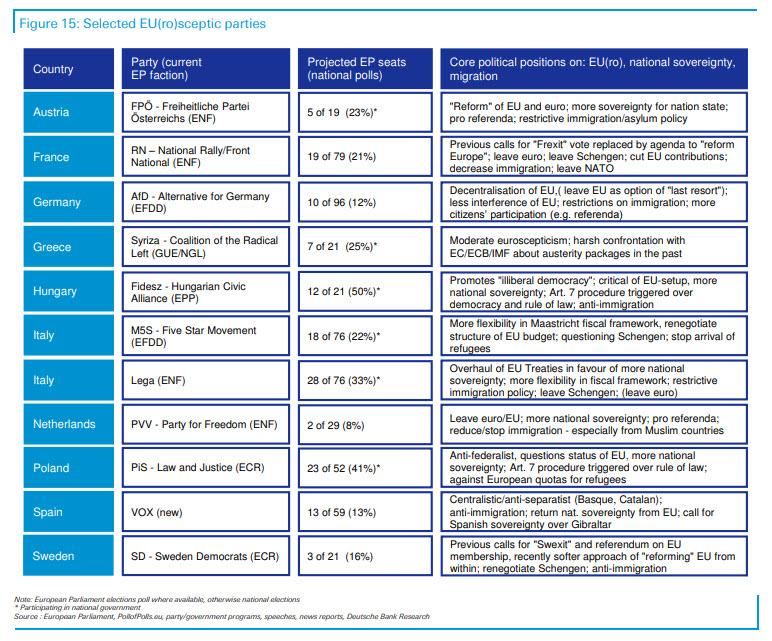 Also worth watching next week given the survey timing is the May IFO survey in Germany on Thursday and May confidence indicators in France on the same day. In the US we’re due to get a regional manufacturing reading from the Kansas Fed on Thursday. Other data worth flagging in the US next week includes April existing home sales on Tuesday, claims on Thursday and preliminary durable and capital goods orders for April on Friday. In the UK we’re due to get the April inflation data docket on Wednesday and April retail sales report on Friday. In Japan preliminary Q1 GDP is due Monday – and expected to show a contraction – and April inflation on Friday.

The FOMC meeting minutes from the April 30-May 1 meeting due on Wednesday will also garner the usual attention. A reminder that at that meeting Chair Powell emphasised that a good portion of the weakness in core inflation was due to  transient factors and pointed to the trimmed mean inflation rate being at the Fed’s 2% target. Powell also sounded more upbeat on the growth outlook, noting a dissipation in downside risks with financial conditions accommodative. That  appeared to disappoint the market at the time which was leaning towards a more dovish outcome.

As well as the minutes, we’ve also got a raft of Fedspeak to get through next week which will be worth keeping an eye on for officials’ views on recent trade escalation, if anything. Tomorrow evening, the Dallas Fed’s Kaplan will speak at a  conference in Arizona. On Monday afternoon we’re due to hear from Philadelphia Fed President Harker in Boston then at midnight Chair Powell is due to deliver the keynote address at the Atlanta Fed’s annual conference. On Tuesday the Chicago Fed’s Evans is due to discuss the economy and monetary policy in Florida, before the Boston Fed’s Rosengren speaks to the Economic Club of New York. On Wednesday the St Louis Fed’s Bullard speaks on the US economic outlook early in the morning in Hong Kong, before the New York Fed’s Williams and Atlanta Fed’s Bostic speak in the afternoon. Finally on Thursday the Dallas Fed’s Kaplan, San Francisco Fed’s Daly and Bostic take part in a panel.

Over at the ECB we’re also due to hear from President Draghi in Frankfurt on Wednesday morning where he opens an ECB colloquium in honor or Peter Praet stepping down from his role. Praet will also speak at that event while Nowotny is due to make remarks on Thursday and Friday. It’s worth noting that the ECB meeting minutes from the April meeting are due on Thursday. Over at the BoE, Carney is due to testify on the April inflation report on Tuesday morning, while Broadbent  speaks on Monday. In Japan the BoJ’s Harada speaks on Wednesday morning.

Finally, other things worth watching next week include the Australian Federal election tomorrow as well as a meeting of the Joint Ministerial Monitoring Committee which oversees the OPEC+ deal to boost oil prices. On Sunday Switzerland will hold a referendum on corporate tax reform. On Tuesday the OECD will publish its latest Economic Outlook and on Thursday we’re expecting to get the results of the Indian general election. We should also note that US fixed income markets are expected to close early on Friday ahead of the Memorial Day holiday weekend.

Key events in the coming days, courtesy of Deutsche Bank

Finally, here are the key events just in the US, courtesy of Goldman Sachs, which notes that “the key economic data release this week is the durable goods report on Friday. In addition, the minutes from the May FOMC meeting will be released on Wednesday. There are several scheduled speaking engagements by Fed officials this week, including one by Vice Chair Richard Clarida on Monday, one by Fed Chair Jerome Powell on Monday evening, and an economic press briefing by New York Fed President John Williams on Wednesday.”