Here we go again — just as tensions seemed to be calming going into the weekend, with Trump distancing himself from some of the more out-front escalatory rhetoric from hawks like Bolton within his own administration last Friday, leave it to who else but Senator Lindsey Graham to ramp things up again. “We must deliver an overwhelming military response,” he tweeted in reference to Iran.

Following Saudi claims last week that Iran was behind a Houthi drone attack out of Yemen which targeted an ARAMCO pumping station and pipeline, and after the alleged “sabotage” attack on Saudi and other tankers near the Strait of Hormuz, Graham said early Monday it was “clear” that Iran has “attacked pipelines and ships of other nations” over the past weeks.

It is clear that over the last several weeks Iran has attacked pipelines and ships of other nations and created threat streams against American interests in Iraq.

Interestingly, again we find Bolton pushing this narrative, per Graham’s tweet: “Just received a briefing from National Security Advisor Bolton about escalating tensions with Iran. It is clear that over the last several weeks Iran has attacked pipelines and ships of other nations and created threat streams against American interests in Iraq.”

And further appearing to acknowledge President Trump’s reluctance to let the hawks drag him into yet another useless and futile regime change war in the Middle East, Graham urged, “Stand firm Mr. President”.

So now it appears the hawks are waging a full frontal assault to goad the president into war, as even a statement from Iran’s foreign minister acknowledged earlier in the day.

“The fault lies with the Iranians, not the United States or any other nation. If the Iranian threats against American personnel and interests are activated we must deliver an overwhelming military response. Stand firm Mr. President,” Graham stated in a follow-up tweet. 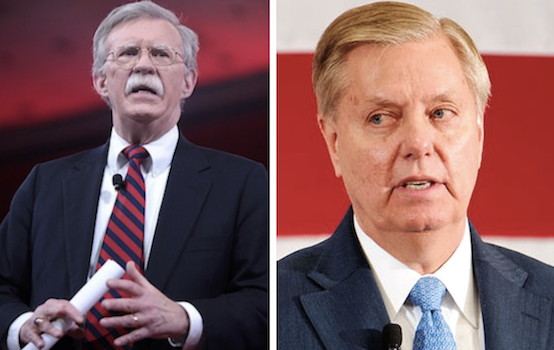 Graham’s urging Trump to resist his initial instincts toward non-intervention, expressed during a Sunday Fox interview wherein the president stated bluntly, “I don’t want to fight” and “I’m not somebody that wants to go into war,” come on the heels of a lone missile attack on the US embassy in Baghdad Sunday, allegedly by an Iran-backed Shia militia.

However, Trump also followed with, “But you do have situations like Iran, you can’t let them have nuclear weapons — you just can’t let that happen.” But noticeably the expected US military action did not come following the apparently isolated embassy incident.

This is perhaps why the hawks are loudly renewing their campaign to convince the president to use greater muscle against Iran.

The “Team B” reference has been a consistent motif pushed by Iran’s Zarif of late. As summarized in The Nation:

Who else wants war? It isn’t just Bolton, who has advocated war with Iran for many years. Joining Bolton on what Zarif calls the “B Team” are Bibi, bin Salman, and bin Zayed (Israeli Prime Minister Benjamin Netanyahu, Saudi Arabian Crown Prince Mohammed bin Salman, and Abu Dhabi’s Crown Prince Mohammed bin Zayed, the effective ruler of the United Arab Emirates). Together, they represent Trump’s Coalition of the Killing.

So now an unprecedented public tug-of-war is playing out on the world stage: Bolton’s deep state axis is busy dragging Trump into war, while Iran and its allies attempt to appeal to the non-interventionist “drain the swamp” stance of Trump’s 2016 campaign.