Why Students Are Fleeing The Humanities

Authored by Phillip Magness via The American Institute for Economic Research,

University faculty as a whole have made a sharp ideological turn toward the far left in the past two decades – a pattern that is extensively borne out in survey data. In a very short period, professors who self-identify on the left grew from a stable plurality of around 40–45 percent of the academy to a clear majority of 60 percent.

The skew, however, has played out unevenly across academic disciplines. Subjects that do not engage very heavily with political content such as the hard sciences, math, engineering, and many professional degrees still have a relatively balanced faculty. But faculty in subjects that do engage in political content — especially the humanities and social sciences — skew much further to the left than the rest of the academy.

While an ideological skew is not necessarily a problem in itself provided that the faculty teach and permit discussions of a broad diversity of viewpoints, the recent leftward shift of the professoriate may actually be taking its toll on academia in another way.

Students are currently fleeing the humanities and many of the social sciences in droves. Although professors in these subjects are apt to blame their woes at attracting majors on budget cuts and a weak job market, a fair amount of evidence shows that undergraduate humanities degrees are highly fungible for obtaining entry-level jobs after college (with the exception of those that require a very specific skill set). There are still substantial salary differentials depending on what major one chooses, and many of the humanities end up on the lower side of the distribution. But humanities employment data also point to a broad array of career paths beyond the specific subject area, with the largest share actually going into managerial roles.

So why are humanities and closely related social science degrees in such dire straits these days? That’s a complex question that likely has many components related to rising tuition and shifts in student preferences about what they want to study. The politicization of these fields, however, may play an under-recognized role in the decline of student interest.

We may see some evidence for this thesis in the chart below. 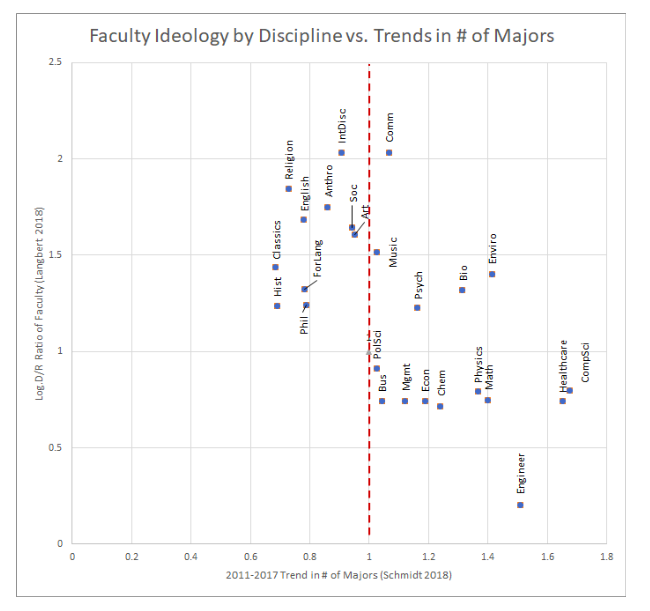 The horizontal axis contains the overall trend in the number of majors by discipline since 2011, as reported in a recent study by the American Historical Association. The dashed red line indicates a score of 1.0, or no change in the patterns of majors since 2011. Disciplines to the right of the line have all gained majors in this period, while disciplines to the left are all in decline.

Measuring faculty ideology by discipline is a bit more tricky, although we have two main sources that both show the same pattern. The first is the above-linked survey by UCLA’s Higher Education Research Institute (HERI), which shows how faculty identify themselves politically. The second approach takes the ratio of Democrat and Republican party registrations by college faculty as found in public records. The most recent data of this type come from a 2018 study by Mitchell Langbert, which focuses on elite liberal arts institutions across the disciplines. Party registration is in some ways an imperfect proxy for ideology, but Langbert’s results closely match the nationally administered but less fine-grained HERI survey.

To construct the vertical axis of the chart above, I took the log of Langbert’s party-identification ratios to create a comparable index of ideological skew for each discipline. (In a few instances Langbert discovered the skew was so heavy as to exclude any Republican registrants from the sample. For these cases, the measure accordingly represents the observed Democratic totals set as a ratio to one hypothetical Republican.) Since all academic disciplines lean left by this measure, the index is actually representative of how severe the skew happens to be. Accordingly, the faculty in some fields such as engineering and the physical sciences only slightly tilt left, while others in the humanities are severe.

In total, these two data sources can be matched across 25 academic disciplines. The results show a clear pattern. Most of the academic disciplines in decline are also more heavily skewed toward the political left. Among the severely skewed disciplines, only two — communications and music — have shown any growth in the number of majors since 2011. And that growth is modest, indicating that they are only treading water. The remainder of the most politically imbalanced disciplines show moderate to severe drops in majors. These include English, foreign languages, history, philosophy, anthropology, and religion.

As a substantial caveat, these findings only point to a pattern of students avoiding the most politicized disciplines. They do not show that ideological skew is the cause of the decline, or that non-leftist students are being excluded from these fields. But it is also not difficult to see how libertarians, conservatives, or even moderates might feel unwelcome in an ideologically unbalanced major.

Many faculty in the most imbalanced departments seem to enjoy the echo chamber of ideological homogeneity that their areas of study have become over the last two decades. Ironically, that imbalance may end up undermining the long-term viability of the same fields. If enough students find the hyper-politicized classroom offerings in the humanities and social sciences to their disliking, they will eventually vote with their feet.