What do you do if you have borderline hyperinflation coupled with accelerating capital flight and a collapse of international confidence in your country’s institutions? In Turkey, the answer is apparently to cut rates.

That’s what the Turkish central bank did early on Tuesday when it effectively rolled back a limited tightening of monetary policy which it delivered just days prior in the latest policy flip-flop by an increasingly chaotic monetary authority, hammering the lira – which is desperate for higher rates – just weeks before President Erdogan’s party seeks to regain control of Istanbul in a bizarre and controversial rerun of local elections.

Two weeks after the Turkish central bank tightened monetary policy, a move which did nothing to boost confidence in the lira, the regulator went for broke and on Tuesday said that it will offer funds at its cheapest rate of 24% through the repo auction, 150 basis points lower than the overnight rate of 25.5% it used for almost two weeks. Today’s announcement came less than a week after Turkey re-introduced a 0.1% tax on most large foreign-currency transactions, a sign the authorities are trying to stem the dollarization of the economy before municipal elections in Istanbul in June.

The panicked decision follows a slew of failed measures meant to prop up the currency before next month’s elections. As Bloomberg note, “some of these steps have raised concern that the government is taking on a larger role in managing the market”, which is a polite way of saying Turkey is preparing to implement capital controls next. Officials have repeatedly said Turkey would adhere to free-market policies.

The implicit easing comes even though Nomura’s economist Inan Demir said that Turkey had no need for monetary loosening at this stage, although clearly Erdogan disagrees. “The pace of domestic economic activity may argue for easier monetary conditions but clearly the FX market stress is too big to allow that,” Demir told Bloomberg.

The problem is that Turkey is now in all-out currency defense mode and has tried everything, including both tightening and easing monetary conditions, with the erratic moves now prompting nothing but more selling of the currency. Here are some of the recent measures by Turkish authorities:

“At the time when Turkey needs to restore confidence in the lira among households, corporates and foreign investors, contradicting measures have been announced. Such conflicting measures make Turkey increasingly unpredictable to foreign investors who will remain reluctant to deploy their capital despite an attractive valuation of Turkish assets.”

The Turkish lira tumbled as much as 0.9% after the bizarro rate cute before eventually stabilizing some 0.4% against the dollar. 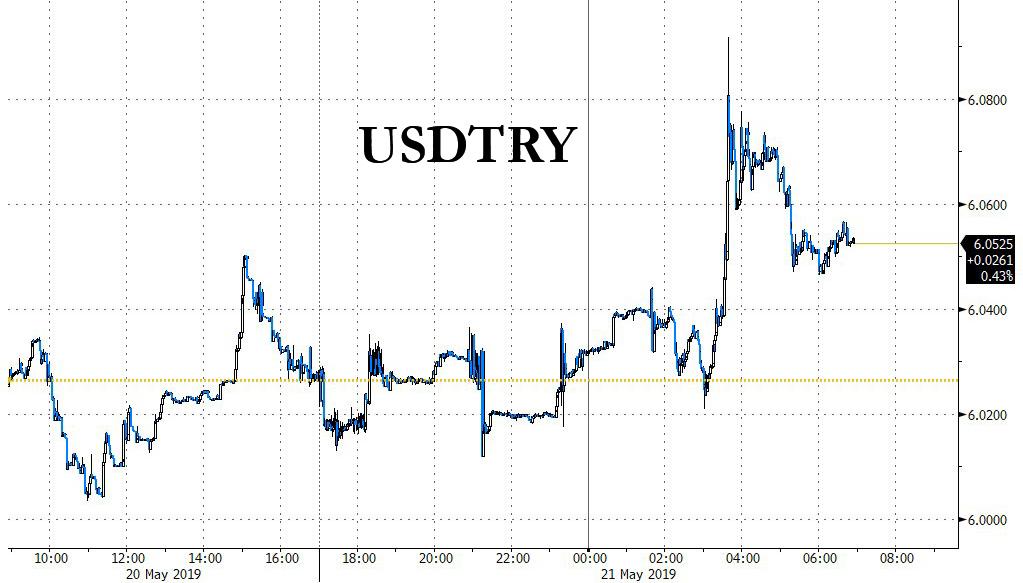 Unfortunately for Erdogan, the fat lady has already sung: since the beginning of the year, residents – who know the local economy best – have bought around $20BN of hard currency, driving their holdings to a near record of more than $181b. The purchases were a key source of strain on Turkey’s currency, the worst performer in emerging- markets this quarter, and suggest that only a wholesale confiscation of FX holdings can save the lira. Judging by Erdogan’s prior actions, that is very likely his next step.