This Is What Hedge Funds Did In The First Quarter

With hedge fund 13Fs now filed as part of the public record, we – or rather Goldman – can do its quarterly hedge fund performance tracking analysis, and overnight Goldman’s Ben Snider did just that, finding that unlike Q4 of 2018 which was the worst quarter for hedge fund since the financial crisis, Q1 was a breath of fresh air for the endangered “2 and 20” community, and the average equity hedge fund has returned +8% so far in 2019, supported by the outperformance of fund favorites.

Which, in context, is not really all that much in a year in which the broader S&P 500 has once again trounced the average hedge fund, returning 18% YTD, and charging precisely nothing for this outperformance. 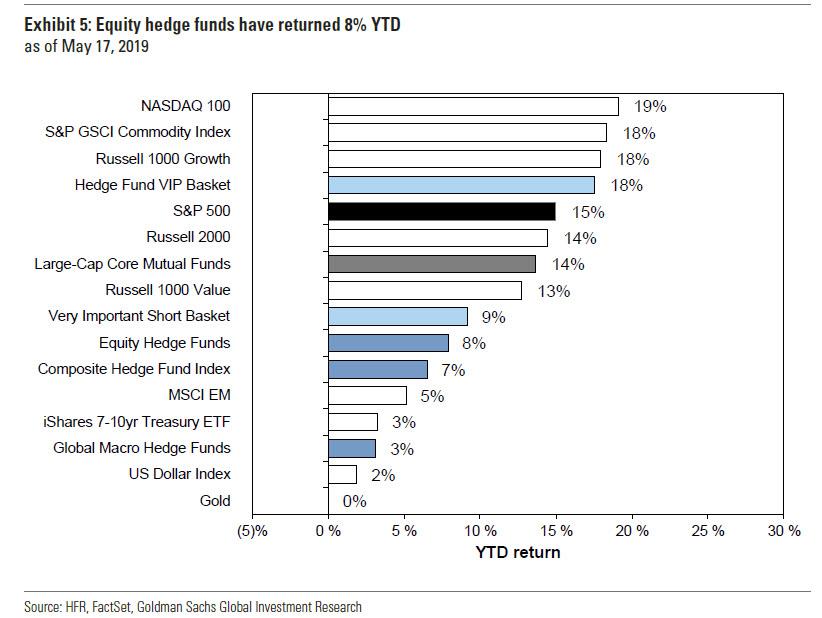 Still, it’s better than a negative return. More interesting than the “average” equity hedge fund, was the performance of Goldman’s Hedge Fund VIP and High Concentration baskets, both of which outperformed the S&P 500 YTD by 3% after getting soundly crushed in 2018.

Surprisingly, the action wasn’t entirely one-sided and according to Goldman, Funds also generated alpha on the short side, with the bank’s Very Important Short Positions basket and its screen of stocks with the largest short interest as a share of market cap both underperforming the S&P 500, and further boosting hedge fund returns.

Yet while the S&P has had one of the best starts to the year since 1987, there has been a distinct lack of euphoria – with investors pulling a near record amount of money from equity funds – or leverage. In fact, Goldman observes that hedge fund leverage remained surprisingly subdued alongside the broad market rally this year. Aggregate net leverage calculated based on publicly-available data registered 52% at the start of 2Q 2019, a decline from the 56% net length at year-end 2018. At the same time, hedge fund gross exposures calculated by Goldman Sachs Prime Services rebounded modestly YTD but still remain well below levels registered prior to the equity market drawdown in late 2018. 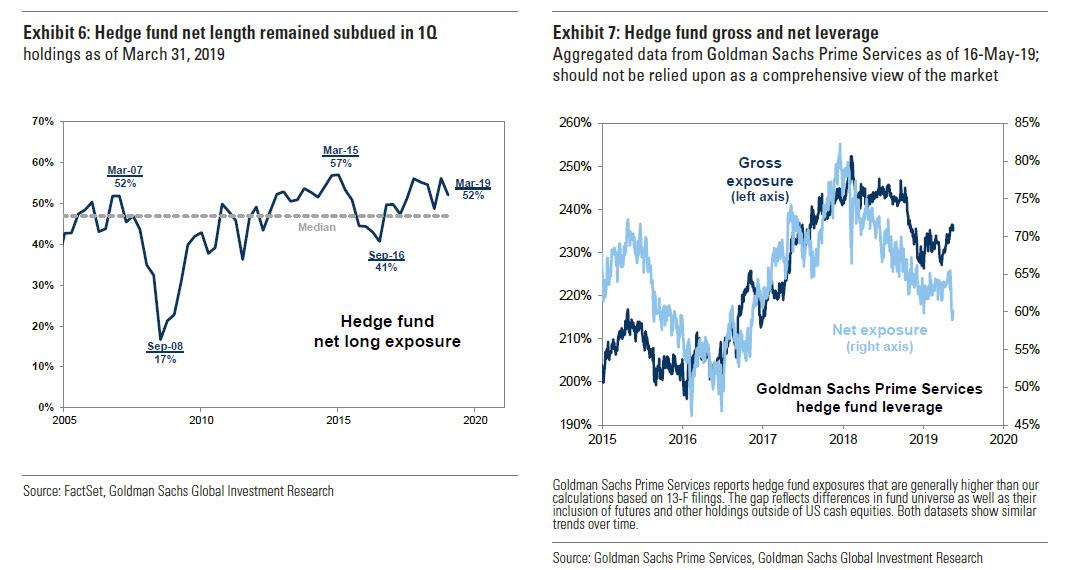 One perhaps not so surprising observation in light of the relentless, and often confounding rally of the first quarter, is that shorts are virtually all dead: as Goldman notes, the share of S&P 500 stock market cap held short has continued to decline this year, reaching the lowest level since 2006. According to Snider, this downward trend is due in part to the increasing use of index products such as ETFs to hedge portfolios, “but also reflects the difficulty of generating alpha through short positions in a surging equity market.” Sure enough, after enough pounding, even the most dedicated bears have to throw the towel.

More surprising is that despite the low levels of short interest, hedge funds have generally been effective with their selection of short positions; in addition to the underperformance of Goldman’s VIP basket, the median stock which shows the stocks with the largest outstanding short interest relative to market cap, has returned just 11% YTD vs. 15% for the S&P 500.

Looking at sector breakdown, hedge funds rotated away from hard cyclicals and embraced secular growth, making the Consumer Discretionary sector the largest net overweight tilt for the first time since 2015. Tech accounts for 18% of hedge fund net exposure, the most of any sector. But relative to the Russell 3000, funds carry the largest tilts toward Consumer Discretionary (+317 bp) and Comm Services (+286 bp). Funds added exposure to both sectors during the first quarter of 2019. In line with the preference for growth stocks, which have outperformed so far in 2019, hedge funds used the 1Q decline in Health Care stocks to add to positions in the sector. Although Financials remains a large underweight, funds added to positions in the sector during 1Q; Consumer Staples now represents the largest underweight sector tilt. 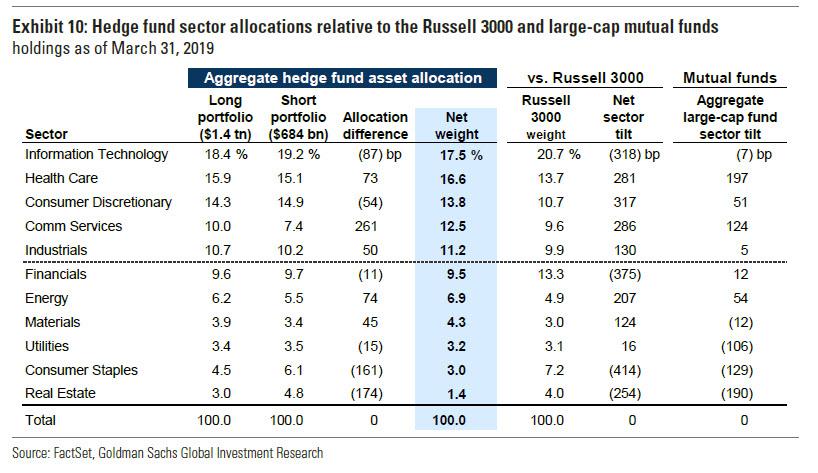 How about after Q1? Well, following the 1Q cyclical rally, funds cut their aggregate tilt toward Energy, Materials, and Industrials by 250 bp and rotated back toward perennial growth favorites Consumer Discretionary and Comm Services. Consistent with the preference for growth stocks, hedge funds used the 1Q Health Care sell-off to add length in the sector. Consumer Staples now represents the largest underweight sector tilt, displacing Financials.

Drilling down on hedge fund crowding, hedge fund concentration in top portfolio positions declined in 1Q but remains extremely elevated relative to history. The average hedge fund holds 69% of its long portfolio in its top 10 positions. 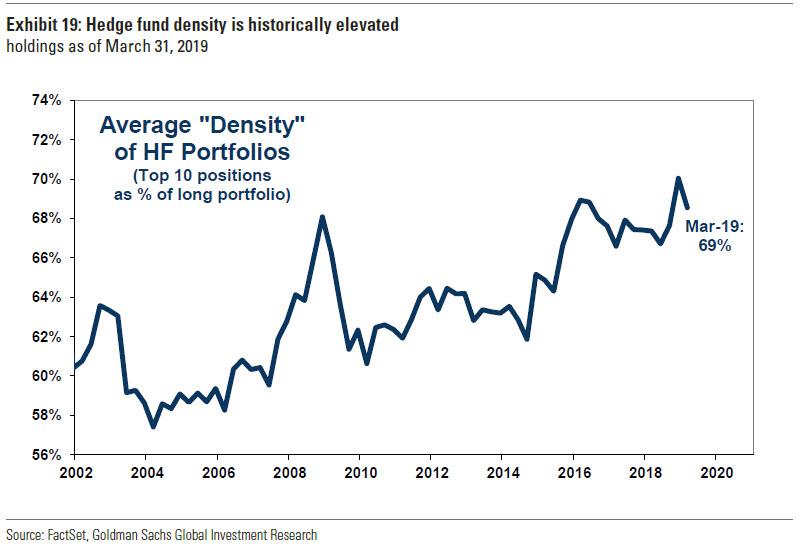 Parallel with the modest drop in density, hedge fund portfolio turnover also fell modestly during 1Q 2019. After rising during the volatility of 4Q 2018, turnover across all portfolio positions fell to 29% during 1Q. Turnover of the largest quartile of positions, which make up the vast majority of portfolios, fell to 18%.

Finally, here are the stocks that matter, first the composition of GOldman’s VIP basket, or the 50 stocks that most frequently appear among the largest 10 hedge fund holdings. 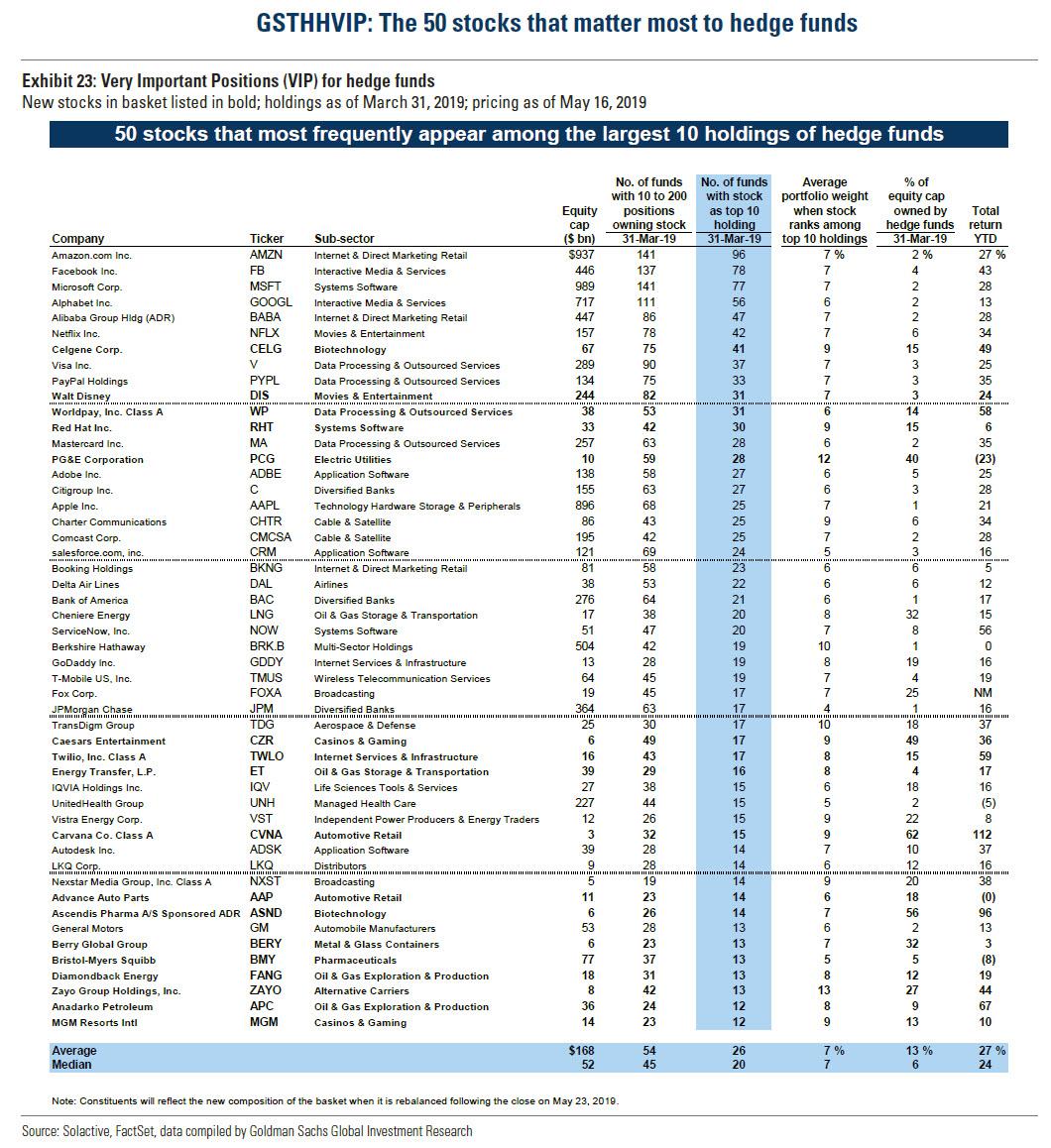 The next two charts show Goldman’s new lists of Rising and Falling Stars based on the most recent position filings. On average, this quarter’s Rising Stars have matched the market return but lagged the list of Falling Stars YTD. None of the Rising or Falling Stars this quarter appeared in the same list last quarter. 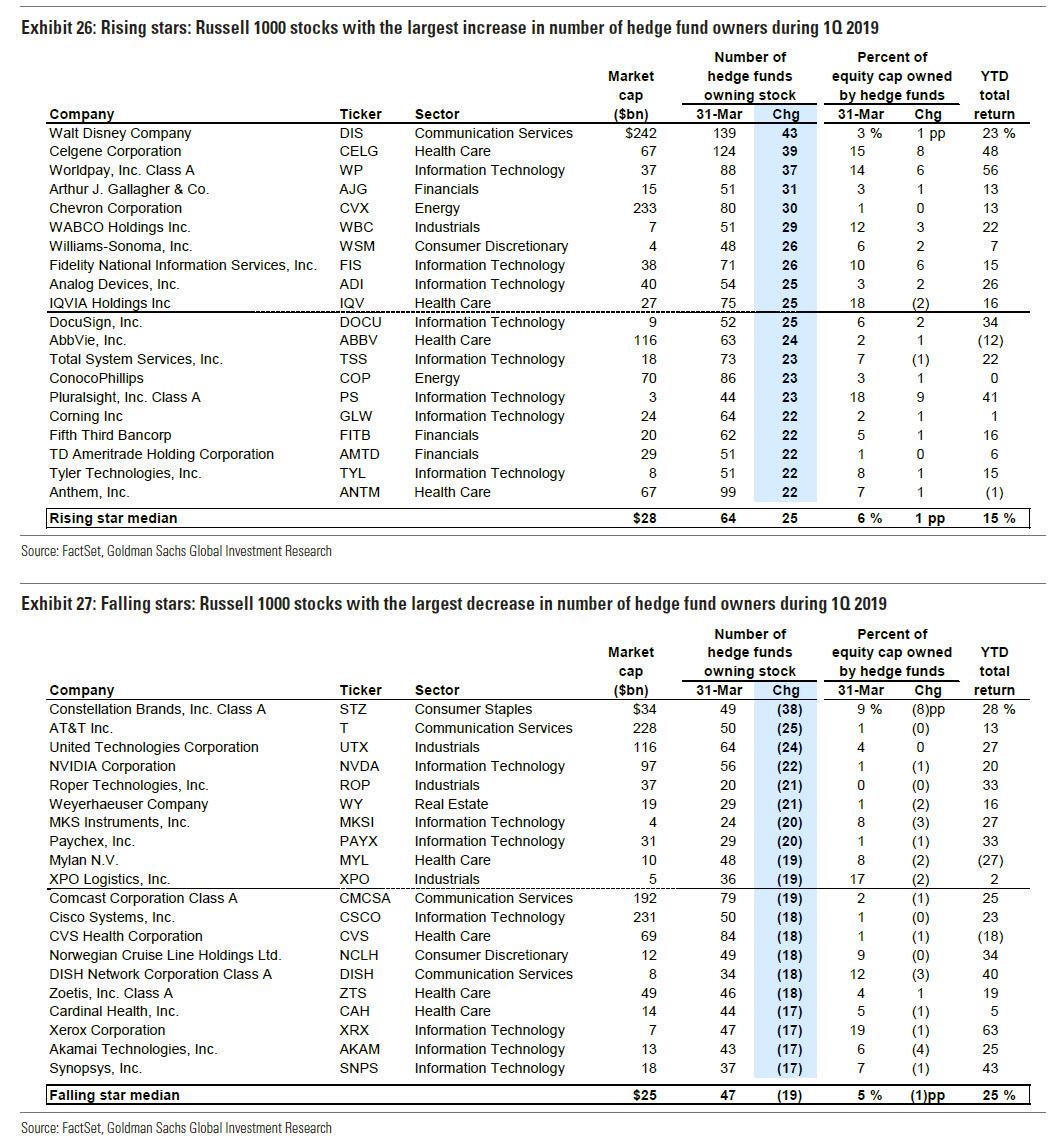 Last but not least is the list of companies that traditionally has generated the highest alpha when investors have purchased a basket of these names: the list of course is that of the 50 largest short positions, because if there are three things guaranteed in life, they are death, taxes, and massive, periodic short squeeze every so often in a market that has long ago stopped acting in response to simple fundamentals. 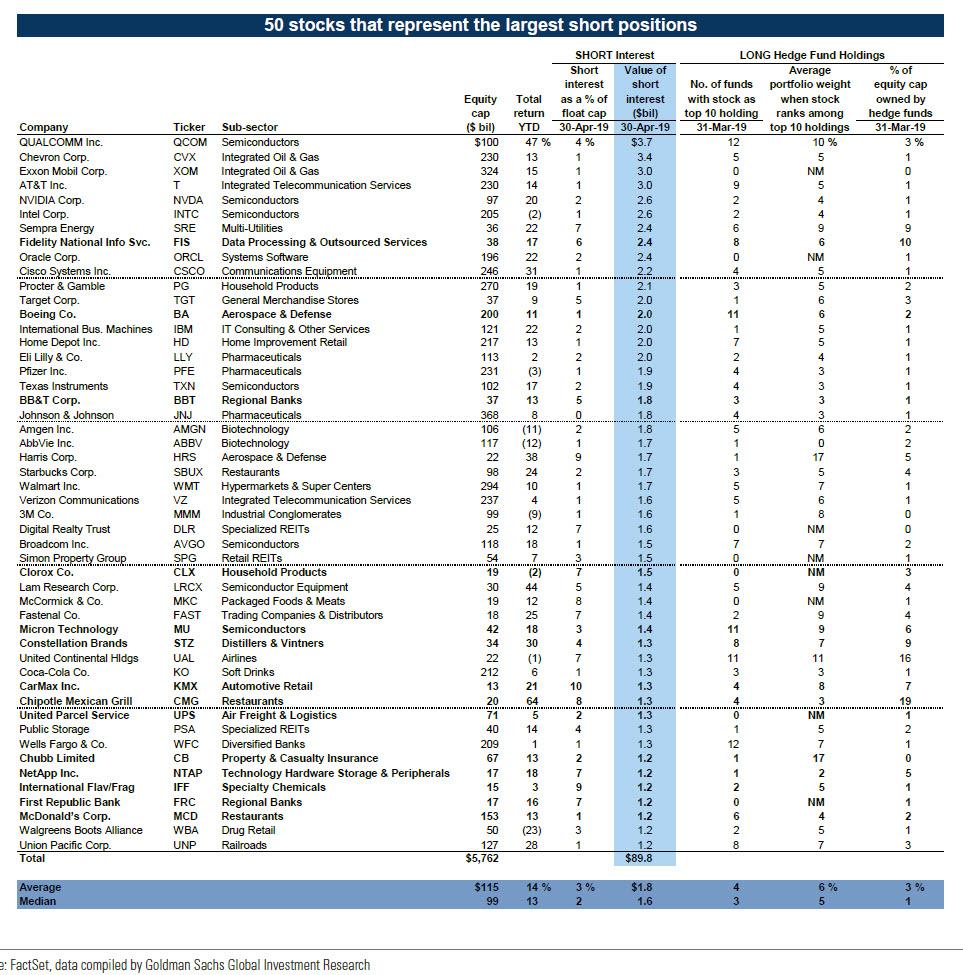