Farm Crisis: Corn Planting Slowest On Record For This Time Of Year

American farmers have some of the most corn acres left to plant, last week, than any other date on record, reported the Crop Progress Report -written by the United States Department of Agriculture (USDA).

The USDA warned corn planting is currently at 49% complete, behind the 80% five-year average. 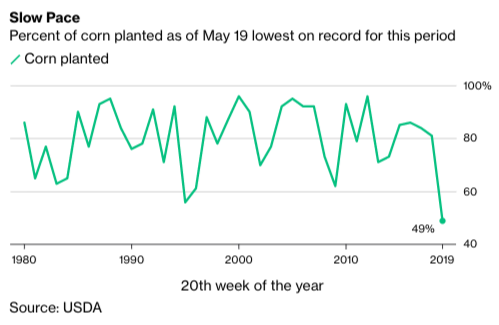 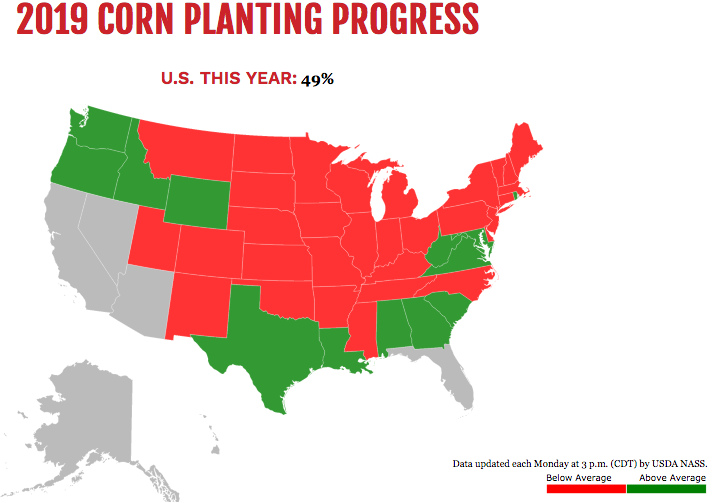 Highlights from the report:

“Disastrous weather conditions have led to an anomalous amount of corn yet to be planted across the United States. After 10-20 inches of rainfall since the beginning of April, field are wet and even flooded in parts of the corn belt. This has prevented farmers from planting corn this Spring, forcing a decision between planting into June (very late for healthy corn), switching their planting to soybeans, or taking prevent plant insurance to cover portions of their crop losses. With the trade war ongoing and impacting price, switching to soybeans is not as attractive as it would be in a typical planting year, putting farmers in a precarious situation, having to choose between the choices discussed above. Heading into June, the weather may become a bit more favorable, but wet risks still exist across the US Ag Belt, adding more frustration to an already frustrated ag sector,” said Meteorologist and owner of Empire Weather LLC., Ed Vallee.

Corn futures moved up 2.33% in 69 hours since the report was published, hitting levels not seen last May when the trade war escalation crashed the commodity 20% in 33 days.

“The market is very short these markets so don’t be surprised to see continued rallies in wheat and corn,” he said, adding that “there is still a big surplus of soybeans.”

Sal Gilbertie, president and chief investment officer at Teucrium Trading, said: “Too much rain in all the wrong places, both over the weekend and in the current forecasts, have traders concerned about late planting for corn and potentially poor wheat quality.”

Reports of 4-8 INCHES of rainfall over the last 24 hours in parts of #Kansas. Flooding ongoing… #KSwx #OATT #plant19 #corn pic.twitter.com/Fi708QsBZj

A perfect storm is developing across the Midwest: farmers are having difficulty planting corn because the weather is too wet. So the alternative is soybean, but because of the trade war, the grain’s export to China has been cut off, which means oversupply conditions will remain. On top of that, if farmers want to collect a government farm bailout, they will need to plant soybean, again, will lead to oversupply conditions.