Israel “Shocked” After Germany Warns Jews Not To Wear Skullcaps

Germany’s top official on anti-Semitism has caused a stir by saying that he would not advise Jews wear skullcaps in certain parts of the country, according to AP.

Felix Klein said in an interview published Saturday that his “opinion has unfortunately changed compared with what it used to be” and that he couldn’t “recommend to Jews that they wear the skullcap at all times everywhere in Germany.”

He also said German police were not familiar with how to deal with anti-Semitic crimes:

“Many of them don’t know what’s allowed and what’s not. There is a clear definition of anti-Semitism and cops should be taught it during their training.”

He didn’t elaborate further on details of what he meant, including what times and places he was referring to. Germany is home to about 100,000 Jewish citizens, according to Haaretz.

Israeli President Reuven Rivlin said on Sunday that he was “shocked” by the comment:

“The statement of the German government’s anti-Semitism commissioner that it would be preferable for Jews not wear a kippa in Germany out of fear for their safety, shocked me deeply.”

“We will never submit, will never lower our gaze and will never react to anti-Semitism with defeatism — and expect and demand our allies act in the same way.” 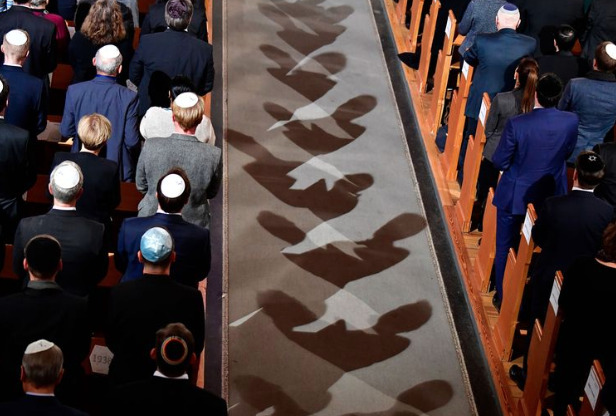 “It has long been a fact that Jews are potentially exposed to danger in some big cities if they can be recognized as Jews.” He added that he pointed that out two years ago, “so it is to be welcomed if this situation gets more attention at the highest political level.”

Three years before that, he also cautioned against wearing one in areas with large Muslim populations. His comments in years prior have been met with criticism from religious leaders in Israel. The country’s chief rabbi, David Lau, said that “skullcaps are a Jewish symbol they should continue to bear proudly.”

Last April, Germans wore skullcaps  in protest of an anti-Semitic attack in Berlin. Meanwhile, statistics from the German government show that the number of anti-Semitic incidents grew in Germany last year, despite an overall drop in politically motivated crimes.

The German Federal Ministry of the Interior says there has been growth of 20% in anti-Semitic crimes in the country. Extreme right-wing activists were responsible for 90% of the 1,800 incidents in 2018.

Michel Friedman, former vice president of the Central Council of Jews in Germany, said: “When an official government representative tells the Jewish community they can’t be protected from violence, it’s a show of poverty for Germany’s legal and political reality.”