Both Washington and Tel Aviv’s past decade of Syria policy has been driven largely by fears of a so-called “Shia crescent” or Iranian land bridge which would conceivably connect Tehran with the Mediterranean via pro-Shia Baghdad and Damascus in a continuous arch of influence. A 2007 article in The New Yorker by famed investigative journalist Seymour Hersh even predicted that a major proxy war fueled by the West and Saudi Arabia, and centered in Syria would soon erupt in order to prevent this so-called Iranian and pro-Shia expansion to the Mediterranean. Hersh presciently wrote at the time:

To undermine Iran, which is predominantly Shiite, the Bush Administration has decided, in effect, to reconfigure its priorities in the Middle East. In Lebanon, the Administration has coöperated with Saudi Arabia’s government, which is Sunni, in clandestine operations that are intended to weaken Hezbollah, the Shiite organization that is backed by Iran. The U.S. has also taken part in clandestine operations aimed at Iran and its ally Syria. A by-product of these activities has been the bolstering of Sunni extremist groups that espouse a militant vision of Islam and are hostile to America and sympathetic to Al Qaeda.

Fast-forward more than a decade after Hersh’s predictions, and a bloody proxy war for Syria that has tragically taken half-a-million lives out of which Assad and his Hezbollah and Iranian allies have emerged victorious, the Washington neocons’ worst nightmare has come true. A literal new land bridge establishing an international highway that runs all the way from Tehran to Beirut is now under construction, just released satellite images reveal. 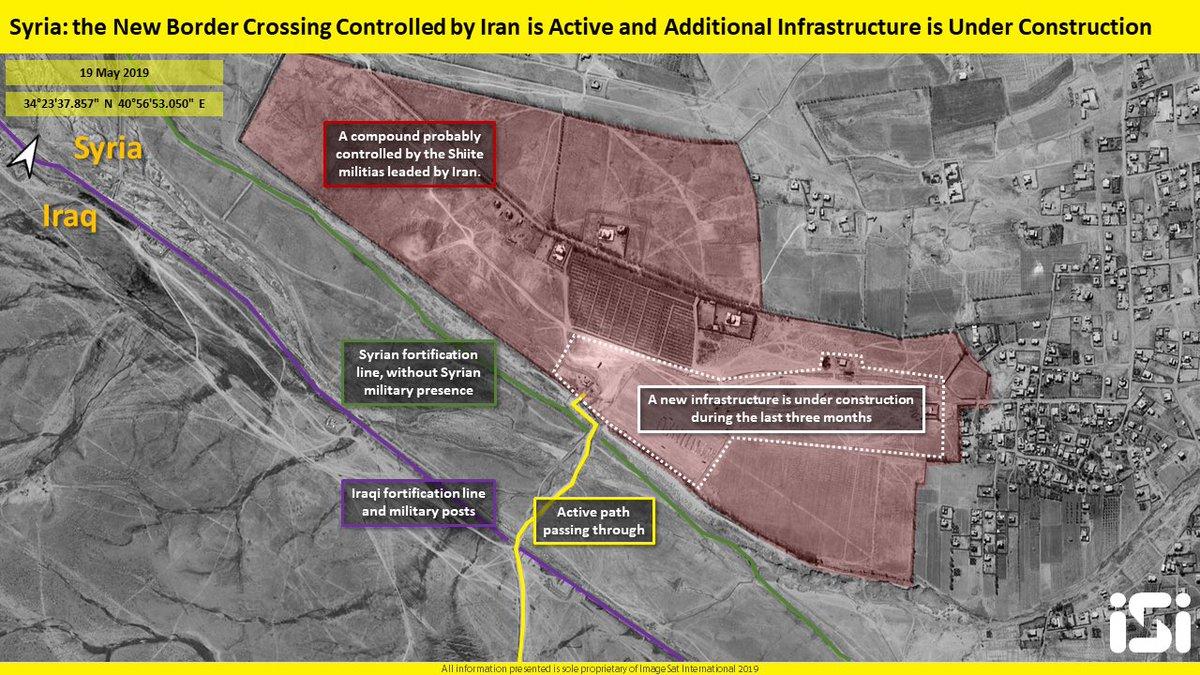 At the end of a month that’s nearly witnessed directly military confrontation between the US and Iran, with a continuous war of words and American military build-up in the Persian Gulf, the White House has ordered a fresh deployment of 1,500 troops to the Middle East to monitor Iran’s actions, according to Pentagon statements.

No doubt these new ground forces will take note of any potential Iranian troop or proxy militia movements through Iran into Syria. Beirut-based Al-Masdar News provides the following details of the newly released satellite images as follows:

The Israel-based Image Satellite International company released a new satellite image showing the construction of a land bridge between Syria and Iraq.

The report notes that this is part of a broader effort “to link Tehran to the Mediterranean via an international highway and railway.”

Ultimately the new transportation corridors will end in the Lebanese capital of Beirut. US and Israeli defense officials have long worried this will be a huge boon to Hezbollah. Israel has over the past two years launched hundreds of airstrikes inside Syria ostensibly to disrupt Hezbollah and Iran-linked weapons shipments.

For Israel and the United States, Iran’s ability to transport oil, supplies, and weapons from their capital to Syria and Lebanon will be a major issue. Israel has already targeted several Iranian arms convoys in Syria over the last five years. With the opening of the international highway, Iran will be able to bypass the sanctions imposed on their country and Syria.

The reopening of this highway is incredibly important to the Syrian government, as the Western sanctions have prevented foreign oil shipments from reaching their port cities. The oil shipments, which are mostly Iranian, have been a rarity since the Trump administration intensified their blockade in the eastern Mediterranean.

Hawks in Washington have long argued for greater US engagement in Syria precisely so that the so-called “Shia crescent” of influence running from Tehran, through Baghdad and Damascus, and into Lebanese Hezbollah territory, can be thwarted.

However, with the Syrian Army now back in control of the majority of the country, including the most populous cities, it looks like US and Israel’s “redirection” policy that Hersh previously described has been dashed.

But this also could be reason to believe that the war in Syria won’t quiet down anytime soon, but could actually be fast ramping up again.