It looks as though everybody, including the media, is starting to understand that Elon Musk’s once grandiose “Hyperloop” idea, to be built by The Boring Company, isn’t the futuristic game changer that it was pitched as. In fact, it’s looking more and more like a very rudimentary idea that’s been around for decades: a car in a tunnel.

And people are catching on that this is not what Musk repeatedly talked about when baffling the public with bullshit publicly describing the idea of a Hyperloop. Over the weekend, the author of a new article for Jalopnik about the Hyperloop couldn’t help but simply refer to it as “a scam” on Twitter.

I cannot overstate what a scam this whole deal has been. https://t.co/Ss5o77OxQo

Indeed, 6 months ago the world laughed heartily in unison when the idea of mass transit via electrified skates for frictionless movement was instead substituted by a Tesla Model X bumping its way through an underground tunnel like an amusement park ride at about 50 miles an hour.

Back then, Musk claimed that the bumpiness was only temporary: “That bumpiness will definitely not be there down the road—it will be smooth as glass.” 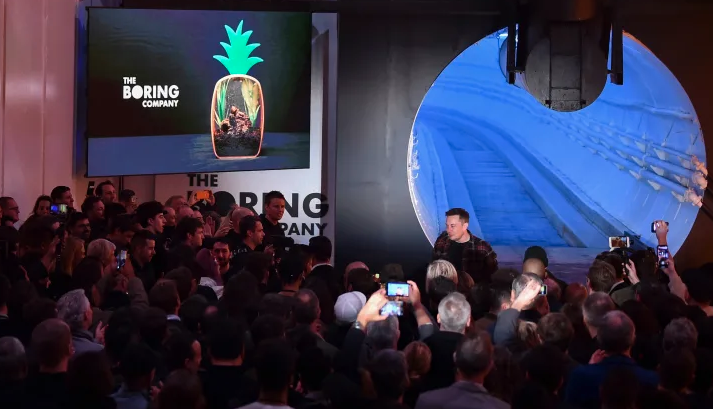 And a new video on The Boring Company’s Twitter account does seem to show that the track has been paved. It shows a vehicle purportedly traveling at 127 miles an hour through a single file tunnel, ostensibly beating out traffic and ushering in a new era of transportation – right?

Wrong. That one video hasn’t stopped people from noticing that the vision of a network of underground futuristic tunnels has simply turned into one small paved tunnel that can fit one car at a time. And of course it beats traffic above ground: the car has the right of way, the whole way, and there’s no wait to use the tunnel and no traffic underground.

And now that the company has signed a $48.6 million contract to build a “people mover” – whatever the hell that means – through Las Vegas, others are noticing that the vision of the Hyperloop idea, seen here in this graphic…

…is likely going to be very different from the reality: cars, doing regular car things, underground.

And why the switch, according to Elon Musk? It’s “simple and it just works,” he said on his Twitter.

This is simple and just works

And how bad can your futuristic green energy project be when the liberals over at the San Francisco BART Twitter account are trolling you?

We carry 28,000 people per hour through our Transbay Tube under the bay because of the capacity of a train. That’s nearly twice as much as cars over the bay. Why wouldn’t you prioritize something that carries far more (and safely with automatic train control) over cars? https://t.co/2Hu3uzu2ND

But Jalopnik reporter Aaron Gordon put it best at the end of his writeup:

To recap: Musk’s company spent two years developing a very narrow car tunnel. To anyone who ever believed Elon Musk’s bullshit: you’ve been had.