“The evidence is overwhelming that the gas attacks were staged,” Award-winning scientist and MIT professor emeritus Theodore Postol told The Grayzone’s Aaron Maté in a newly published interview.

The “smoking gun” memo refutes key events surrounding the April 2018 alleged chemical gas attack in Douma, Syria – which resulted at the time in massive US and allied airstrikes on Damascus, including the launch of over one hundred Tomahawk cruise missiles.

The document, whose authenticity the OPCW has confirmed, contends that the official story which was used to justify an air strike by the US, UK and France about poison gas being dropped on civilians from Syrian government helicopters is scientifically implausible, saying “In summary, observations at the scene of the two locations, together with subsequent analysis, suggest that there is a higher probability that both cylinders were manually placed at those two locations rather than being delivered from aircraft.”

Watch the interview below:

Postol said during the interview:

“If I were advising somebody, as I did when I was in the Pentagon, I advised the chief of naval operations, and part of my job was to take technically detailed analysis and translate it into information that could be readily understood by an intelligent non-expert, so if I were briefing the chief on this particular document, I would not caveat it quite the way that the [OPCW] professionals did, although they did a good job…”

The incredibly revealing analysis by the MIT rocket scientist, based on reviewing the newly leaked Organization for the Prohibition of Chemical Weapons (OPCW) document is crucial given a week ago there was yet another chemical attack claim by al-Qaeda linked “rebels” near Idlib on May 19, which the US State Department says it is investigating, vowing to “respond quickly and appropriately” if Assad is found guilty of using the banned weapons, according to an official statement.

The leaked OPCW document can be accessed here.

Just who is Theodore Postol as why is his damning assessment of the alleged chemical attacks in Syria important? 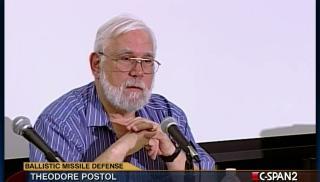 From his Massachusetts Institute of Technology (MIT) official bio:

Theodore Postol is Professor of Science, Technology and National Security Policy in the Program in Science, Technology, and Society at MIT. He did his undergraduate work in physics and his graduate work in nuclear engineering at the Massachusetts Institute of Technology. After receiving his Ph.D., Dr. Postol joined the staff of Argonne National Laboratory, where he studied the microscopic dynamics and structure of liquids and disordered solids using neutron, x-ray and light scattering, along with computer molecular dynamics techniques. Subsequently he went to the Congressional Office of Technology Assessment to study methods of basing the MX Missile, and later worked as a scientific adviser to the Chief of Naval Operations. After leaving the Pentagon, Dr. Postol helped to build a program at Stanford University to train mid-career scientists to study developments in weapons technology of relevance to defense and arms control policy. In 1990 Dr. Postol was awarded the Leo Szilard Prize from the American Physical Society. In 1995 he received the Hilliard Roderick Prize from the American Association for the Advancement of Science and in 2001 he received the Norbert Wiener Award from Computer Professionals for Social Responsibility for uncovering numerous and important false claims about missile defenses.