One of the country’s most sensitive nuclear missile launch facilities has admitted that Air Force personnel responsible for overseeing the base were caught boozing, in violation of strict regulations governing nuclear sites.

F.E. Warren Air Force Base in Wyoming said in a media statement last week two maintainers of a launch control center part of the US 90th Missile Wing, responsible for some 150 nuclear LGM-30G Minuteman III intercontinental ballistic missiles across three states, were investigated and are being disciplined after it was confirmed they consumed alcohol at the missile alert facility earlier this month.

The personnel were only identified as a staff sergeant and a senior airmen who belong to the 90th Missile Wing — their names withheld for security reasons. The pair admitted to consuming alcohol at the facility while off-duty; however, Air Force Global Strike Command regulations prohibit “processing or consuming alcoholic beverages … within the confines of any missile alert facility … while en route to or from duty in the missile complex,” as cited in The Air Force Times.

Obviously the rationale for this strict zero tolerance standard, whether on or off duty, is that a mere single error or series of errors – whether in ignorance or from violation of protocol – could potentially trigger apocalyptic nuclear strikes and the end of humanity as we known it. “This is an unacceptable breach of standards and the Air Force held the airmen accountable for their actions,” an Air Force statement said.

Apparently, the news was first made public via an unofficial social media page maintained by Air Force personnel which mocked the whole incident, per the military analysis site Task & Purpose:

On Thursday, a Facebook post from the popular Air Force amn/nco/snco group claimed that three airmen assigned to the 90th Maintenance Group were discovered consuming Pabst Blue Ribbon in the F.E. Warren cardio room during a regular nuclear code change.

“It appears there’s a running joke on the base about the incident and they even have memes going around which were sent for us to post,” the source wrote. “They have deemed PBR as the Official beer of the 2019 Nuclear Missile Code Change at F.E. Warren AFB.”

Joseph Coslett, operations chief for for the 90th Missile Wing public affairs, confirmed that the incident occurred on May 14 but stated that only two airmen, a staff sergeant and a senior airman, were involved.

While the particular references to Pabst Blue Ribbon and “nuclear code change” may have been a joke or exaggeration, the scandal was very real — at least the second major incident in a few years. 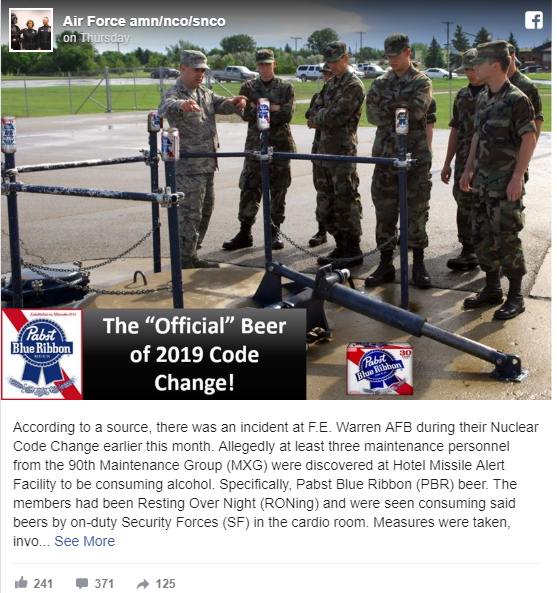 An Air Force statement took pains to ensure the public that the airmen “were not in contact [with], nor had any access to, weapons or classified material” at the time.

The actual underground launch control center at the site is reportedly segregated from other areas of the Missile Alert Facility, but it’s still worrisome that anyone at the nuclear launch site might be showing up to their shift boozed up.

In 2018 it came to light that airmen at the same base responsible for safeguarding America’s nuclear weapons had been busted for using and distributing the hallucinogen LSD and other drugs, starting in 2016, when the LSD ring was first uncovered.

While the 2016 scandal was under investigation, at least one of the suspected military members involved had fled to Mexico to avoid prosecution under a military court.