Between January 1 and May 19 of this year, New York Police recorded 176 hate-crime complaints, an 83% increase over the same period in 2018, according to the Wall Street Journal. 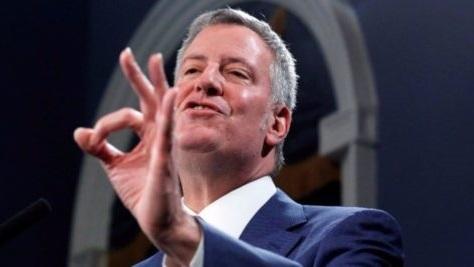 A spike in anti-Semitic hate crimes accounted for a majority of the increase, with those complaints rising from 50 to 103, or 59% of all hate crimes during that period, according to the NYPD.

De Blasio allocated $336,000 in 2020 funding to the Office of Hate Crime Prevention in January, however critics such as Council Speaker Corey Johnson say this falls short of the $475,000 required to fully fund the office, which supports city agencies’ efforts to prevent, investigate and prosecute hate crimes (and one would hope, hate crime hoaxes).

“Our residents should feel free to worship without fear–and yet they can’t right now,” said Johnson. “We have an anti-Semitism crisis in New York. It’s a national problem, but New York accounts for way too many incidents.”

“In New York City, we celebrate our differences and reject any attempt to hate and divide,” said de Blasio in a statement. “That’s why we funded The Office of Hate Crime Prevention to prevent these heinous crimes before they occur,” adding that current funding is sufficient, although discussions over the city budget are ongoing.

Experts disagree on the reasons behind the rise in crimes, but NYPD Chief of Detectives Dermot Shea said at a news conference earlier this month that many individuals arrested for hate crimes have previously committed similar acts.

Other data reported by the NYPD show that arrests for hate crimes are rising even faster than complaints, as police aggressively pursue cases both new and old. –Wall Street Journal

Last year there were 65 arrests for hate crimes between Jan. 1 through April 28, over double that of 2017 figures. Despite the increase in arrests, some have suggested that New York City needs to beef up its police presence and outreach in communities affected by all the hate.

According to former State Assemblyman Dov Hikind of Brooklyn, “Things are out of control,” adding “All the resources in the world should be allocated to this purpose.“