If you don’t know about Jeopardy Champion James Holzhauer by now, you haven’t been paying attention (or read “Meet The Man Who Mastered “Jeopardy!” By Ignoring Conventional Wisdom“). Holzhauer has shocked the world, not only by amassing millions of dollars in Jeopardy winnings, but doing it at a blistering pace, making former Jeopardy champion Ken Jennings look like a snail in comparison. Despite being $455,000 behind Jennings in total winnings still, Holzhauer is closing in Jennings’ $2.5 million at breakneck speed.

The New York Times has published two charts showing, graphically, just how efficient of a player Holzhauer has been. As you can see from the first chart, Holzhauer’s pace when compared to former champion Ken Jennings is stunning. He is averaging about $76,500 per episode, compared to Jennings’ $34,000 per episode. 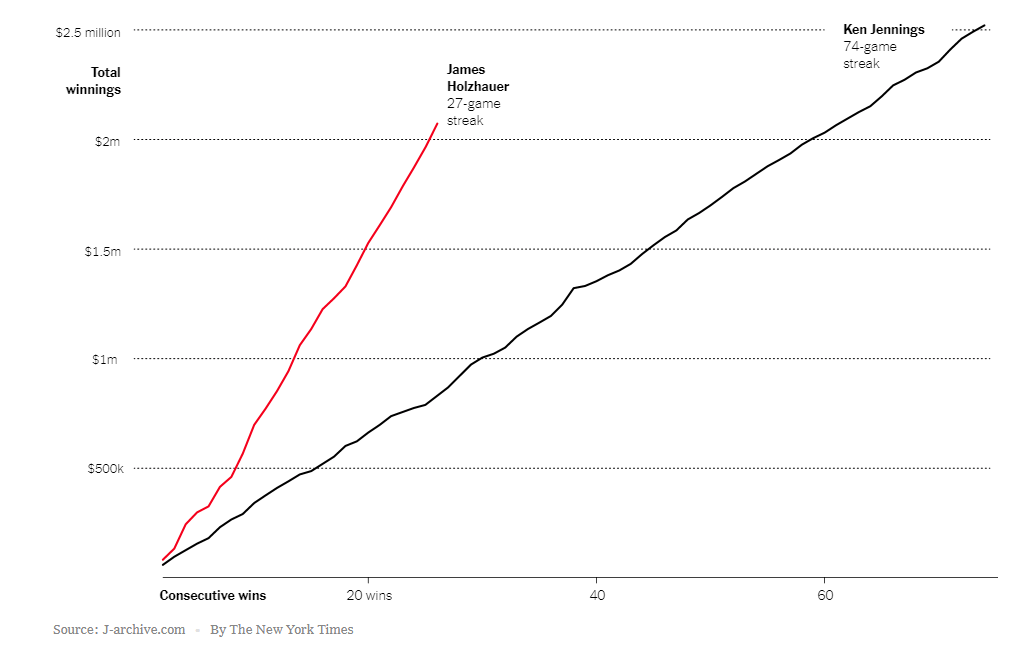 In addition, his projected winnings, should he continue at this pace, will likely near $6 million by the time he has played as many game as Jennings. Jennings’ streak is, so far, still 47 games longer than Holzhauer. 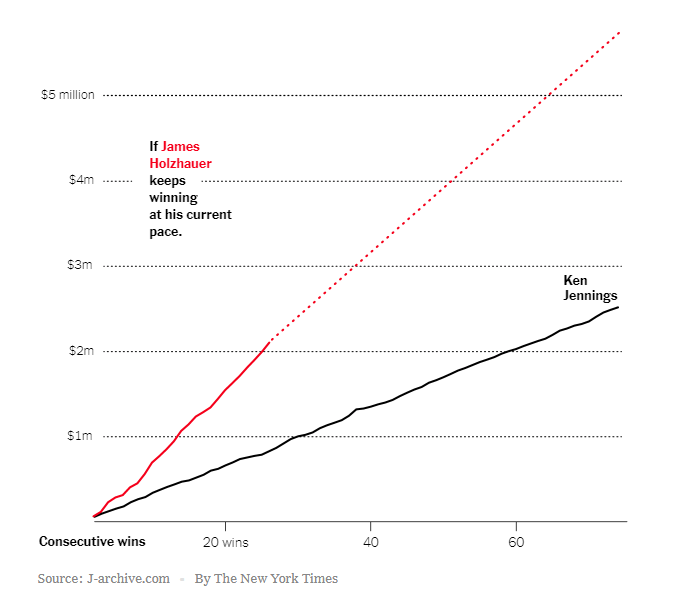 When factoring in the “Tournament of Champions” games, Brad Rutter is still the all time earner at $4.7 million. Inclusive of these games, Jennings stands at $3.4 million.

We detailed Holzhauer’s strategy at length in a recent post , remarking how the “secret” of his success was turning conventional wisdom on its head. Unlike 99.9% of the game’s previous contestants, he starts at the bottom of the board and goes sideways.

“It seems pretty simple to me: If you want more money, start with the bigger-money clues,” Holzhauer explained in an interview with Vulture magazine. He told NPR “What I do that’s different than anyone who came before me is I will try to build the pot first” before seeking out the game’s Daily Doubles. He then “leverages” his winnings with “strategically aggressive” wagers (read: wagers far larger than any contestant before him was willing to make).

This strategy – along with the fact he’s answering 96.7 percent of the clues correctly –  has allowed James to build insurmountable leads heading into Final Jeopardy. He can then be ultra-aggressive with his Final Jeopardy wagers, including one of $60,013. It was this wager that allowed James to establish his current single-game record of $131,016.

You can read more on his strategy here.