With China’s bond market continues to be hammered in the aftermath of the government’s surprise seizure of Baoshang  Bank (see “A Big Wake Up Call”: Chinese Bond Market Roiled By First Ever Bank Failure“), the PBOC – whose open market operations had been in dormancy for much of 2019 – finally panicked and on Wednesday injected a whopping net 250 billion yuan ($36 billion) into the financial system via open-market operations, as it fills what traders have dubbed a growing funding gap following the Baoshang failure.

The consequences of this liquidity flood were instant: China’s overnight repurchase rate, a measure of interbank liquidity, tumbled the most in three weeks, while the benchmark 7-day repo rate also declined. “The operations so far this week send a strong signal that the PBOC is ready to ensure ample liquidity for the market, amid fragile sentiment in the credit and bond market,” said Westpac strategist Frances Cheung. The central bank also set the daily yuan fixing at a stronger-than-expected level to prevent even a hint of speculation that China will be have no choice but to devalue the yuan as part of the “reliquification” of the market.

The PBOC’s massive liquidity injection, which was the largest since January when the S&P was still close to a bear market and started the tremendous Chinese stock market rally, also helped the Shanghai Composite be one of the few markets that closed in the green overnight.

However, while the near-term reaction was favorable to Chinese risk, the paradox is that this only became a viable option as a result of a far greater problem: China’s interbank funding market is starting to freeze.

As we reported on Tuesday, the bank has – or rather had – more than 60 billion yuan of negotiable certificates of deposit (NCDs) and 6.5 billion yuan of subordinated bonds outstanding. Trading in the the company’s NCDs and other bonds was promptly suspended on Monday, with traders fearing that a self-fulfillling prophecy would emerge as contagion spreads to other troubled banks’ NCDs and/or bonds.

As noted previously, the contingent convertible/perpetual debt issued by some of the more troubled banks such as Huishang, Bank of Zhengzhou and China Zheshang Bank, was hammered over the past three days and has yet to recover. 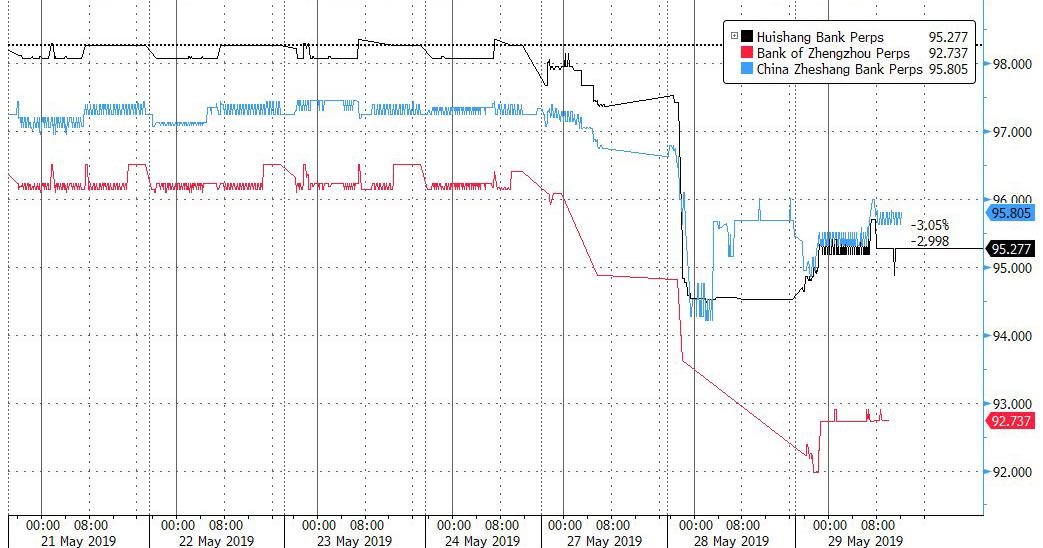 As an aside, for those asking why NCD’s matter, the answer is because as we explained as far back as two years ago, numerous smaller banks had become acutely reliant on such shadow banking funding mechanisms as Certificates of Deposit, which had become the primary source of short-term funding for many of China’s banks mid-size and smaller banks.

As Deutsche Bank further explained, the banks most exposed to a shut down in this “shadow funding” pathway are medium-sized and small banks, for whom wholesale funding made up 31% and 23%, a number that has risen substantially in the interim period.

The issue of NCD funding is especially troublesome, because as Bloomberg reported overnight, in the aftermath of the Baoshang seizure, some Chinese banks and securities firms “tightened requirements for negotiable certificates of deposits that are used as collateral for funding.” In some cases, private NCDs were shunned altogether, and some financial institutions now only accept NCDs sold by state-owned and joint stock banks as collateral while some have refused to lend money to investors pledging NCDs issued by lenders rated AA+ and below for now.

“The Baoshang incident is pressuring short-term liquidity,” said a trader at a Chinese bank. “Along with month-end seasonal factors, cash conditions are becoming tighter and pushing up the near-date swap points higher. And that has led the swap curve moving upward.”

Ji Tianhe, China rates and FX strategist at BNP Paribas in Beijing, said that the takeover of Baoshang could be interpreted as a “marginal targeted deleveraging” campaign, and could change the ecosystem of the interbank market.

“Smaller banks are supposed to serve the real economy, but some turned out be very active in interbank trading in order to expand their size. Now this latest move is pushing similar small lenders back to their core business,” Ji said according to Reuters. He added that as small banks are not allowed to borrow in the exchange market and have to largely rely on bigger banks for interbank funding, “they are now facing a challenging funding situation.”

This also explains why traders are casting concerned glances at Chinese bonds, because as Jianghai Securities explained overnight, China’s government bonds may slide as banks sell them to make up a liquidity shortfall from issuing fewer negotiable certificates of deposits.

Analysts at OCBC bank said in a note on Tuesday that the takeover had sparked a sell-off in Chinese sovereign bonds on Monday after reports that corporate deposits and interbank liabilities over 50 million yuan could be subject to a haircut of 20%-30%, “due to concern about the possible break of implicit guarantee.”

“This may cause interbank lenders to reassess their relationship with the smaller lenders,” the analysts said.

But a partial (or complete) freeze of the interbank funding market, which many believe is what was the key catalyst behind the US financial crisis as shadow funding conduits froze up in the aftermath of the Lehman failure, is just one of China’s major headaches. The far bigger one is the risk of a bank run.

And to address that, just around the time Baoshang was about to be nationalized, the central bank set up a wholly-owned deposit insurance fund with registration capital of 10 billion yuan on May 24, according to registration record on a website run by State Administration for Market Regulation. It’s also why on May 26, the central bank said on May 26 that PBOC, CBIRC and Deposit Insurance Fund will guarantee some Baoshang Bank debt repayment.

The good news is that for now, there have been no reports of bank runs, or even jogs, in China, although this is precisely the kind of news that would be throttled and censored as much as possible by Beijing, which can not afford a countrywide bank run, threatening the collapse of China’s massive $35 billion banking system. 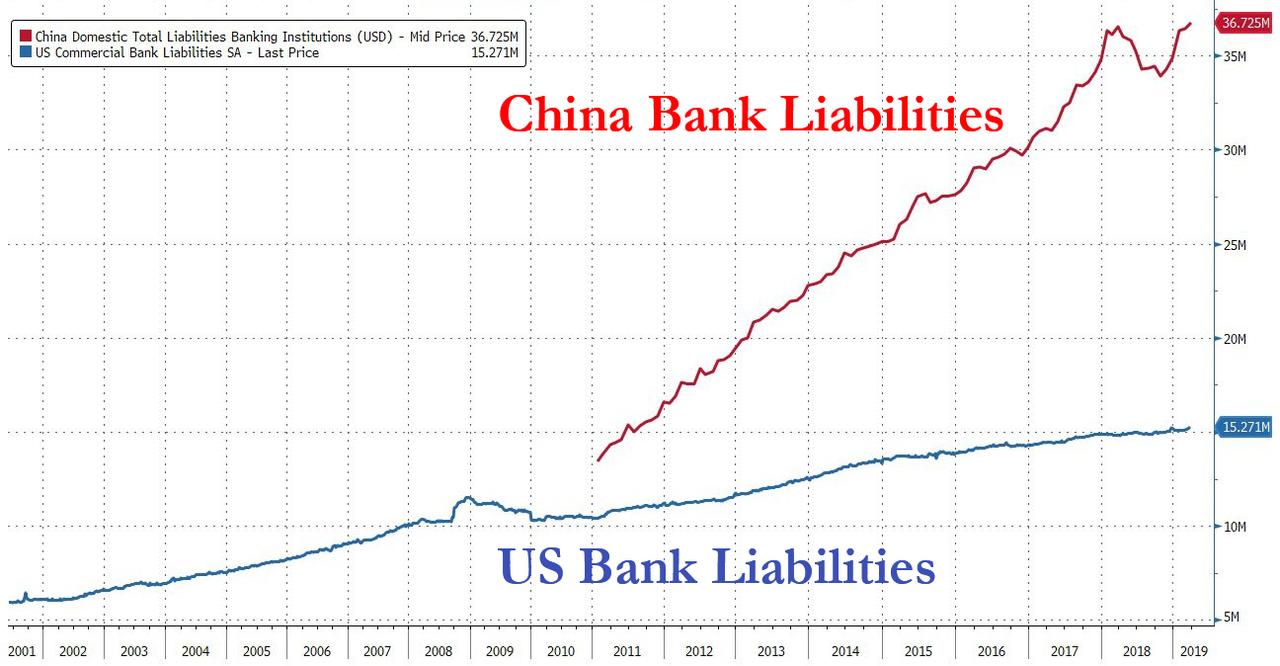 The last item is that with the PBOC panicking, this may have major implications on the global scene, where the last thing China can afford is to be seen devaluing the yuan. Alas, as Bank of America notes, the PBOC is now trapped as it needs to inject even more liquidity into the system amid deteriorating data, signs of fund outflows, US-China trade tensions and as 463 billion yuan of MLF matures on June 6. The PBOC’s challenge lies in adding liquidity without letting the yuan depreciate too far, and as BofA’s Claudio Piron notes, “leaning more on monetary easing rather than fiscal will cause yields to fall and the yuan to depreciate against the greenback” which is why in preempting this, PBOC has added the massive cash injection through OMO. To be sure, while the PBOC will likely have to inject much more liquidity, the likelihood of a cut in banks’ reserve requirement ratio when the 463BN yuan of MLF expires in June is increasing.

One thing that is certain: Baoshang is just the tip of the iceberg. According to UBS analyst Jason Bedford, who in 2017 was the first to highlight Baoshang’s troubles, there are several other banks that have “identical leading risk indicators” to Baoshang. Hengfeng Bank, Jinzhou Bank Co. and Chengdu Rural Commercial Bank all failed to publish their latest financial statements, have a large portion of their balance sheets invested in “loan-like investment assets” and are subject to negative local media coverage, he said in a note to clients published Tuesday. 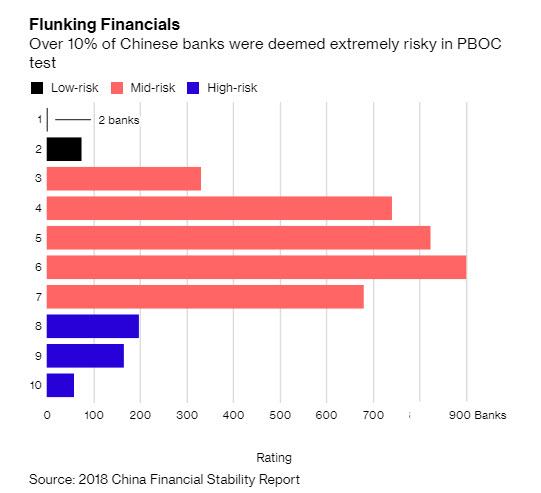 As Bloomberg reports, Hangfeng said that it hasn’t completed auditing and reviewing its financial statements. Officials at Jinzhou and Chengdu Rural didn’t reply to requests for comment.

The bottom line: while much of the world is focusing on the still intangible consequences of the latest round of trade war escalation, China is currently going through a very real, and very problematic rebalancing between adjusting the level of market liquidity without sparking a sharp selloff in the yuan, which would push it below 7.00 vs the USD, and provoking another major, and panicked, capital outflow which could have dire consequences on China’s capital market and economy.

So while focusing on any flashing red headlines over the latest trade war developments, keep a close eye on what is taking place below the surface in China’s banking system, where the risk of substantial deterioration has risen substantially following the first Chinese bank failure in nearly three decades.