While the 2019 IPO market, until recently red hot and on pace for a record year… 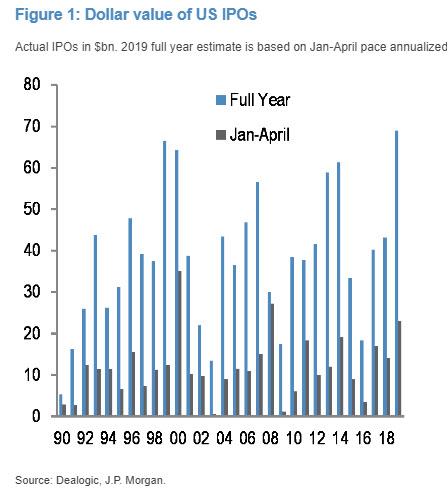 … only to suffer the dismal initial offerings from cash furnaces Lyft and Uber which crippled investor demand for massively overvalued Silicon Valley unicorns, may soon suffer a knockout blow after WeCommunityAdjustEBITDA WeWork goes public in the near future, the whimsical provider of disruptively money-losing office space is taking a look at Plan B should its shares sink, and according to Bloomberg, is in talks with banks about arranging a $2.75 billion credit line ahead of its planned IPO, with JPMorgan as lead arranger.

In April, WeWork said it had filed paperwork confidentially with for an IPO, with its upcoming offering expected to be the biggest of the year after Uber. And yet, red flags emerged earlier this year when WeWork’s largest backers, include SoftBank, earlier this year decided against taking a controlling stake.

While securing a revolving line of credit from Wall Street often precedes an IPO as companies going public “reward banks that make big credit commitments with roles in their IPOs, with lenders sometimes offering better terms on the financing in return” according to Bloomberg, considering the size of the upcoming IPO one wonders if this is not a precaution in case of some unexpected adverse developments in the coming weeks – i.e., a market crash – crushes sentiment for new offerings (thanks Uber) and forces WeWork to WeMakeDue with what liquidity the company manages to raise post haste.

As Bloomberg REIT analyst Jeffrey Langbaym writes, “WeWork needs access to cash to secure, design and lease office space to sustain robust revenue growth. The company had $6 billion in cash as of early 2019 after burning through $2.3 billion in 2018.”

There is another problem: WeWork has a profit margin that is less than 100%, or as we noted in March, “WeWork Made $1.8 Billion In Revenue Last Year; It Lost $1.9 Billion.“

Still, a successful IPO should suffice to provide a cash buffer for the next few years. However, if that is unsuccessful… well that’s where the lending syndicate comes in.

To be sure, it won’t be WeWork first secured credit facility: in 2014 the company obtained a $650 million revolver also led by JPMorgan, which is set to expire in late 2020.

What makes the IPO even more unusual is that last year, WeWork sold 7 year junk bonds, which today closed at $93.50 , a decline from a peak of $99.63 earlier this month, and yielding a whopping 9.5% in a time when junk bonds above 6% are seen as especially risky. 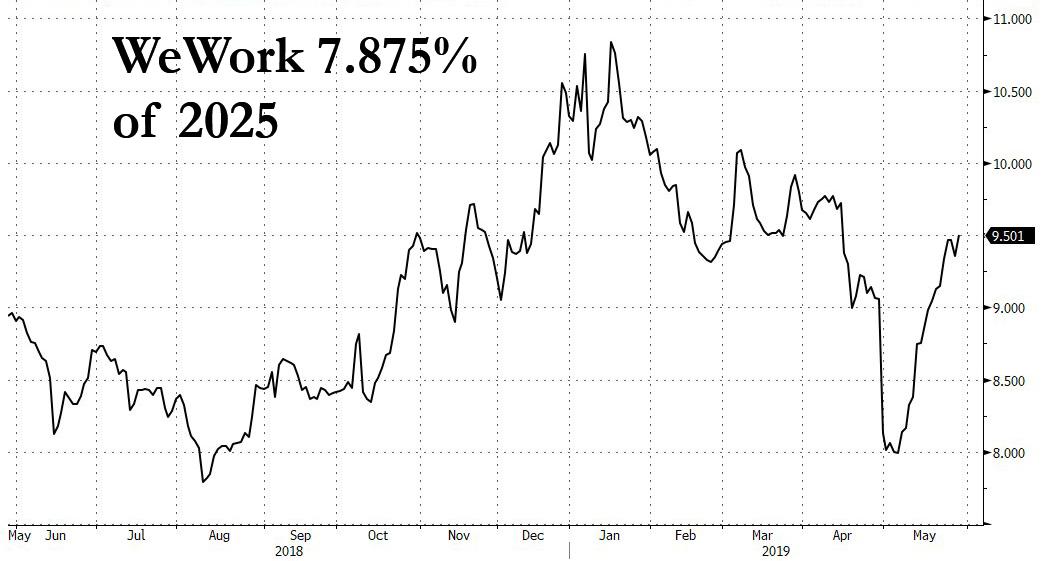 And yet despite the credit market voting with its feet on a company which is expected to keep burning cash for the foreseeable future, equity investors have no problem with being part of a cap structure where not only is unlimited debt likely to be layered – we expect the new loan to be covenant “non-existant” – but where institutional investors already see substantial viability risk.

WeWork, which has ambitions to go beyond the office with businesses in apartment rentals and elementary schools and recently rebranded itself to just We Co., said in early May that its loss narrowed slightly to $264 million in the first quarter. As Bloomberg concludes, “its IPO will test public investors’ appetite for another tech-infused, cash-burning business after Uber’s disappointing debut.”

Or it may not: the probability of the IPO getting pulled is inversely proportional to where the S&P is at any given moment, and if Beijing wishes to force WeWork to pull the “market conditions” card, it just has to keep escalating the trade war with the US. Either that, or a critical mass of non-algo investors finally asks how a company that reported an actual EBITDA loss $193 million had the temerity to convert this number into a profit of $233 million just using non-GAAP adjustments to reach a “Community Adjusted EBITDA.” 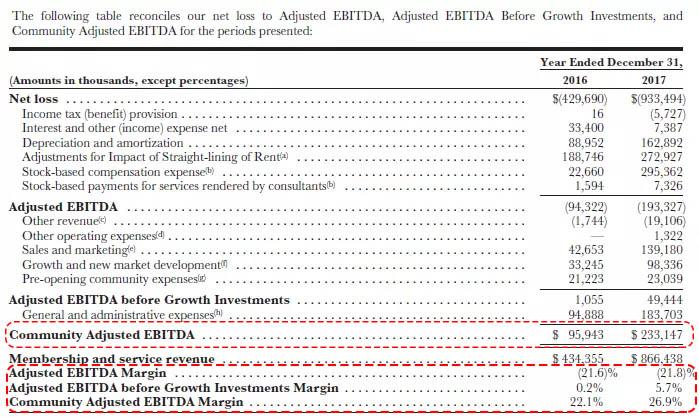 Don’t Give Politicians Credit for a Growing Economy