From Gold To Nothing: How 1971 Changed Everything In The Economy

The monetary system is a major component of the whole economic system. Despite that, today we take it for granted and don’t even ask ourselves how it works and if it is the best solution available or the correct way to manage things.

Even though it appears to be stable, history shows that monetary systems changed periodically in the last century (20–30 years on average).

That means that what we call money is a government-issued currency that has zero intrinsic value and is not backed by anything.

From 1971, this kind of system allows central banks to literally control the economy and opened a new chapter in the world monetary system.

In this article, I am going to briefly explain why 1971 changed everything and what are potential consequences of such a decision.

Since 1971 the world runs on FIAT currencies that are not gold-backed in any way. This changes everything.

Before digging into it, we have to review some history.

Towards the end of the World War II, peace was a real concern and it was clear that the world needed a new monetary system able to support the economy.

In fact, one of the major reason that led to World War II was the failure in dealing with economic problems after World War I.

Why It Was Needed And How It Worked

The Bretton Woods agreement was signed at a conference between allied nations in 1944.

Before the agreement, most countries followed the gold standard, meaning that each country guaranteed to redeem its currency into gold.

After Bretton Woods, countries agreed to exchange their currency for U.S. Dollars. Central banks committed to keep fixed exchange rates with the dollar while the U.S. committed to keep the parity between U.S. dollars and gold at 1/35 of an ounce of gold.

The dollar was backed by gold at 1/35 oz and foreign countries committed to keep fixed interest rates with the U.S. dollar

Why U.S. dollars? In those years U.S. held two-thirds of the world’s gold reserves and after the war was obviously the most influential player among nations.
This put the U.S. into a dominant position and Bretton Woods paved the way for the shift from the gold standard to the U.S. dollar standard.

The Collapse Of The System

The Bretton Wood system worked for a while and allowed for economic growth but unfortunately, a series of imbalances brought the system to its end in a matter of three decades from its inception.

Towards the 70’s United States were facing a period of stagflation, a situation where you have high inflation coupled with a recession, something very bad for the economy.

In the attempt of resolving the situation the U.S. started devaluing the dollar and kept running deficits to fund various projects.

The parity between dollar and gold was the cardinal element of the Bretton Wood system after it changed, the whole monetary agreement soon after collapsed.

Every country started quickly to redeem their devaluing dollars for gold generating a run on the U.S. gold reserves.

In response, on 15 August 1971 broke up the Bretton Woods agreement, ending the convertibility of the dollar in gold.

What replaced Bretton Woods and how things changed since then?

Since Nixon took the entire world out of gold in 1971, the world began this experiment of a full FIAT monetary system, backed by nothing.

Nobody knows how things will play out in the end, but the fact that this system has been running for almost 50 years now, that historically FIAT system had a 100% failure rate and that bigger and bigger imbalances are being created are factors worth considering.

To put things in perspective, once that currency is no longer commodity-backed, central banks can create as much currency as they want.

Even though this comes in handy when there is the need to fight a recession, it seems that it went out of control.

This is a problem for two reasons:

Purchasing Power of the Currency

How do you feel when you look at this chart?

This visual representation helps to clearly understand what money printing and devaluation of currency really mean in everyday life. 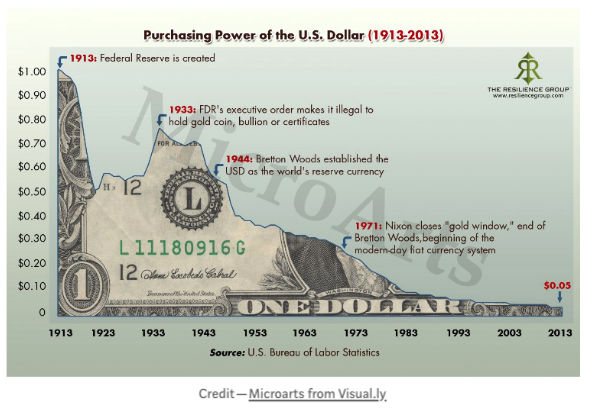 Although it speaks by itself, take a moment to realize that the dollar lost 95% of its purchasing power in just 100 years.

As money printing progresses, this situation can only deteriorate and it is a problem for the individuals because it makes virtually impossible to save money.

You can’t just save you are bound to invest at least to keep the purchasing power. Giving the overall decrease in asset returns, it also forces you to go on riskier investments to have some acceptable returns.

Distortion in the Economy

This might actually be the real problem because money (or currency today) is one of the most important variables in the economic system and if it gets manipulated this doesn’t come without consequences.

When you take a look at the degree of distortion in today’s economy there is a real chance that this situation won’t end up well.

To get an idea of the massive manipulation of the entire economy that is going on, start by assessing the expansion of the monetary base: 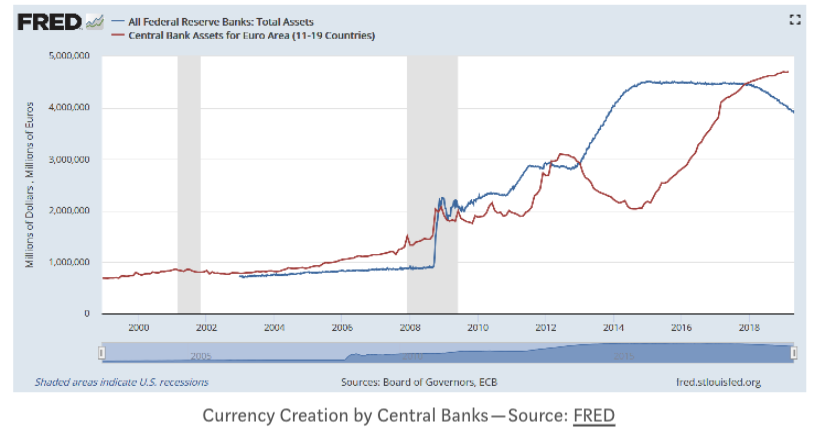 As you can see, the quantity of currency almost quintupled in a matter of a single decade and this was all currency created in order to keep the economy going.

This is crazy and while it helped to postpone a slowdown in the economy, it fostered a huge debt assumption that sooner or later will result in a burden for the economy.

The problem with this monetary system is that can’t balance the forces of the free market. The gold standard had a huge advantage over it because it was self-balancing since the overall amount of money was fixed.

Without a conscious effort to limit excesses, greater and greater imbalances start to appear, cracks start to show up and the system is under threat.

This also caused other distortions, like the push to stock market valuations that are now in bubble territory. 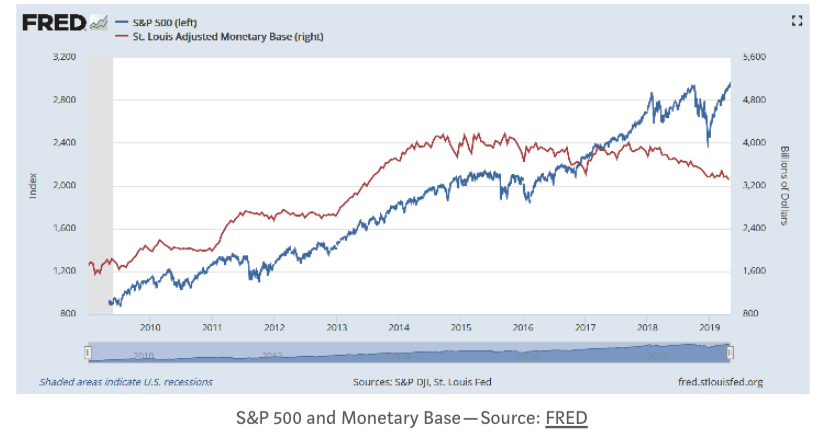 Take a look at this chart and realize by yourself that there is no chance that is is a coincidence. There is almost a perfect correlation between expanding the monetary base and increasing stock prices.

You can also see that as monetary policy tried to start to raise interest rates, uncertainties on the market promptly showed up and now the FED already changed its strategy.

We might see soon a new monetary expansion, the problem is that this time it would happen before a crisis and it leaves us with a huge question:

What to do then when we enter the real crisis?

Without any connection with a fixed quantity of gold (more in general, a “fixed quantity”), the monetary system currently has no limits for currency creation.

The fact that financial crisis is getting bigger and bigger and levels of debtare getting higher and higher is a direct consequence of money printing.

Today we find ourself with an economy that is slowing down, levels of debt never seen before, frighteningly high financial markets valuations and LESS TOOLS TO FIGHT THE NEXT CRISIS

I am not saying that money printing and fighting a recession is a bad thing by itself, but without any control, it is a real problem because it leads to the destruction of purchasing power and the generation of distortions in the economy and markets.

The point is that the economic crisis has a fundamental rebalancing role in the economy and prevent them to work doesn’t come without consequences.

It’s understandable that governments and policymakers don’t want to have a crisis while they are in charge, but forcing the economy through monetary policy to never slow down brings on the risk of a full-blown financial disaster. Something never is seen before that counts for everything that didn’t take place until today.

‘Frothing Hysterics’ & The Fumes Of Fanaticism

America’s Defense Budget Is Bigger Than You Think