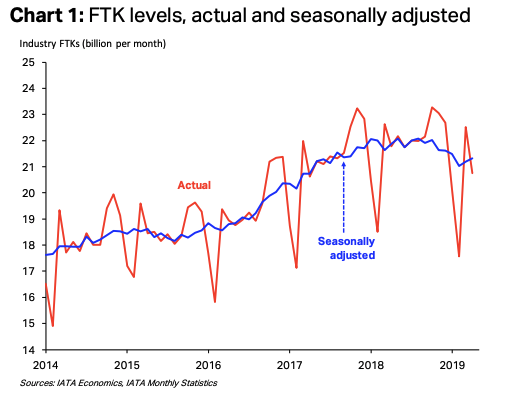 “If we see further deterioration and tariff increases, there will be further damage to world trade,” IATA director general Alexandre de Juniac said on a conference call. “It will be a difficult year for world cargo.”

Freight capacity, measured in freight tonne kilometers (AFTKs), expanded by 2.6% YoY in April. Capacity growth outpaced demand for the last four quarters. Air cargo volumes marginally increased during the Chinese New Year and Easter but have since turned down with volumes 3% below the August 2018 peak.

“April saw a sharp decline in air cargo growth and the trend is clearly negative this year. Cost inputs are rising, trade tensions are affecting confidence, and global trade is weakening. Airlines are adjusting their capacity growth to try and fall into line with the dip in global trade since the end of 2018. It all adds up to a challenging year ahead for the cargo business. Governments should respond by easing trade barriers in order to drive economic activity,” said Juniac.

Evidence of the slowdown is materializing across the world. Chinese industrial output, retail sales, and investment dropped in April, said Bloomberg. In the US, retail sales declined in April while factory production dropped for the third time in four months. In Europe, German business confidence fell to four-year lows last month.

Nearly $6 trillion of goods are exported by air transport each year, according to IATA, accounting for 35% of world trade. Air freight companies have already warned about revenue declines due to weakening world trade. 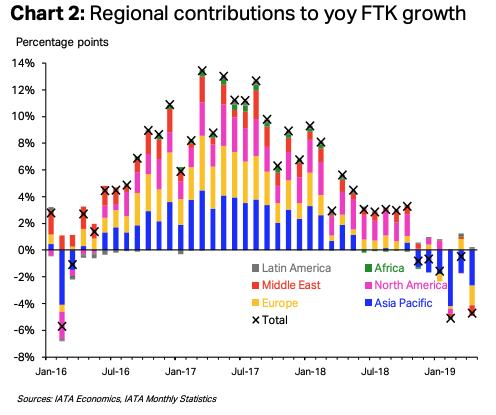 Both UPS and rival FedEx have warned about declining shipments because of the trade war. Korean Air Lines has recently seen a “drastic” reduction in cargo volumes. Data from German airport operators and Deutsche Lufthansa AG also show declining volumes. 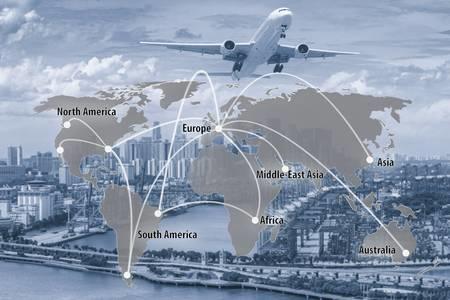 Robert Mayer, a senior lecturer of cargo business at the Centre for Air Transport Management at England’s Cranfield University, told Bloomberg that air freight slowdowns could lead to a broader industrial slowdown, similar to what was seen right before the 2008 crash.

“There will be a fallout on cargo as we go through the year,” Tim Clark, president of Gulf long-haul airline Emirates, said in an interview at IATA’s annual meeting in Seoul on Sunday. “If it worsens and there is a lot of posturing aero-politically, which is possibly a result of the trade war, that could see an effect on trans-Pacific demand and to an extent European-Asian demand.”

As the trade war deepens, tariffs will rip supply chains apart, raising the price of every part and product. Companies will have to then rework these complex operations in ways that will shift trade flows.

“Freight export volumes from China may not recover to their pre-tariff levels,” Cowen & Co analyst Jason Seidl said in a May 8 report. “Many shippers have adjusted their supply chains to source goods from South Asia, South America, Mexico, and Canada or the US.”

Global trade volumes show a decline since 4Q18, breaking a straight ascending line from when global central banks injected record amounts of credit into the global financial system in 1H16. Global growth in 1Q19 has stagnated, and the risk of a worldwide trade recession is higher than it has ever been in the last ten years. 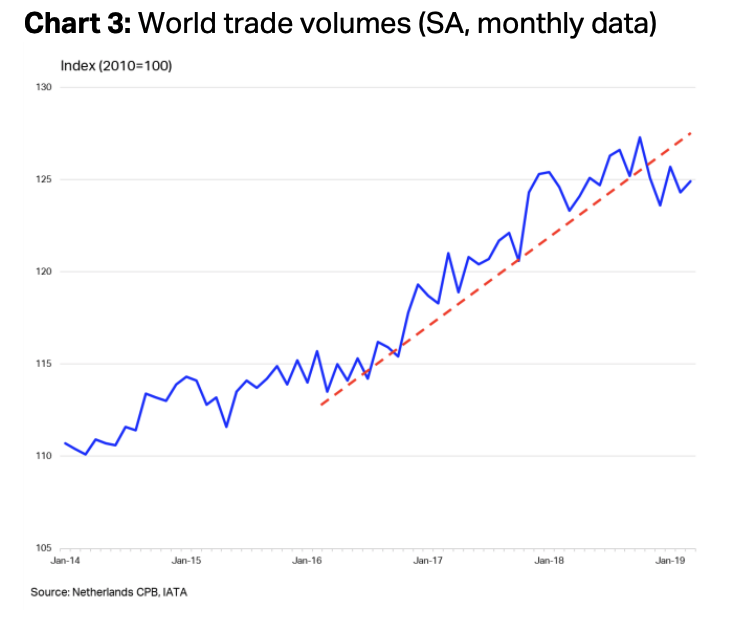 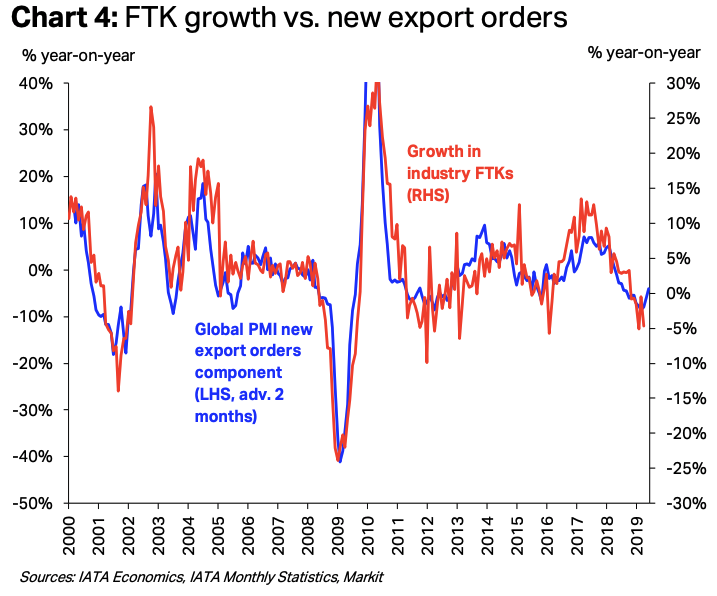 The most significant concern we have is that growth in 2H19 will not rebound but instead plunge even further.