A Pakistani politican’s very serious press conference turned into a feline fiasco on Friday after the entire meeting was broadcast over Facebook Live with the “cat filter” setting turned on. 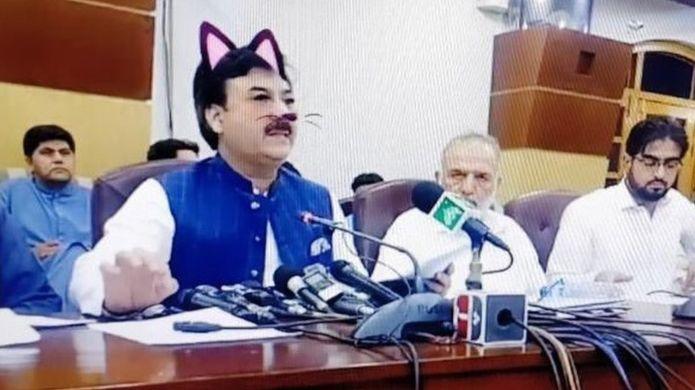 Secretary General Shaukat Yousafzai of Pakistan’s Khyber Pakhtunkhwa provincial government conducted the meeting, completely unaware that he was sporting a pair of moving cat ears, a black nose and whiskers.

The man sitting to his right was also given feline features.

As Mr Yousafzai spoke, the comical filter superimposed pink ears and whiskers on his face, and that of other officials sitting beside him.

“I wasn’t the only one – two officials sitting along me were also hit by the cat filter,” Mr Yousafzai told AFP news agency. –BBC

According to KP government’s social media team we now have a cat in the cabinet #Filter pic.twitter.com/LNl7zwOfLU

I propose all parliamentary proceedings around the world to be recorded with Cat Filters. Please start with the British Parliament! @HouseofCommons @UKHouseofLords @UKParliament https://t.co/7vAJRcEN3m