“Quietest Season In 20 Years”: Truckers Turn Apocalyptic As Sentiment Crashes Most On Record

The verdict on whether trade war with China will escalate to the max has yet to be delivered, but the fallout is already here.

According to Bank of America’s proprietary bi-weekly Truckload Diffusion Indicator for shippers’ 0- to 3-month freight outlook declined significantly this week, to 52.5 from 61.1 last issue, back to the same level it was two weeks ago, hitting its lowest level since October 2016. The 14% sequential decline completely reverses last issue’s surprise 16% increase.

This is how stunning the plunge in the US trucking industry has been: the indicator is down 29% year-over-year, its 21st consecutive and largest year-year decline in the history of the BofA survey, as well as the longest negative year-year stretch since mid-2016. 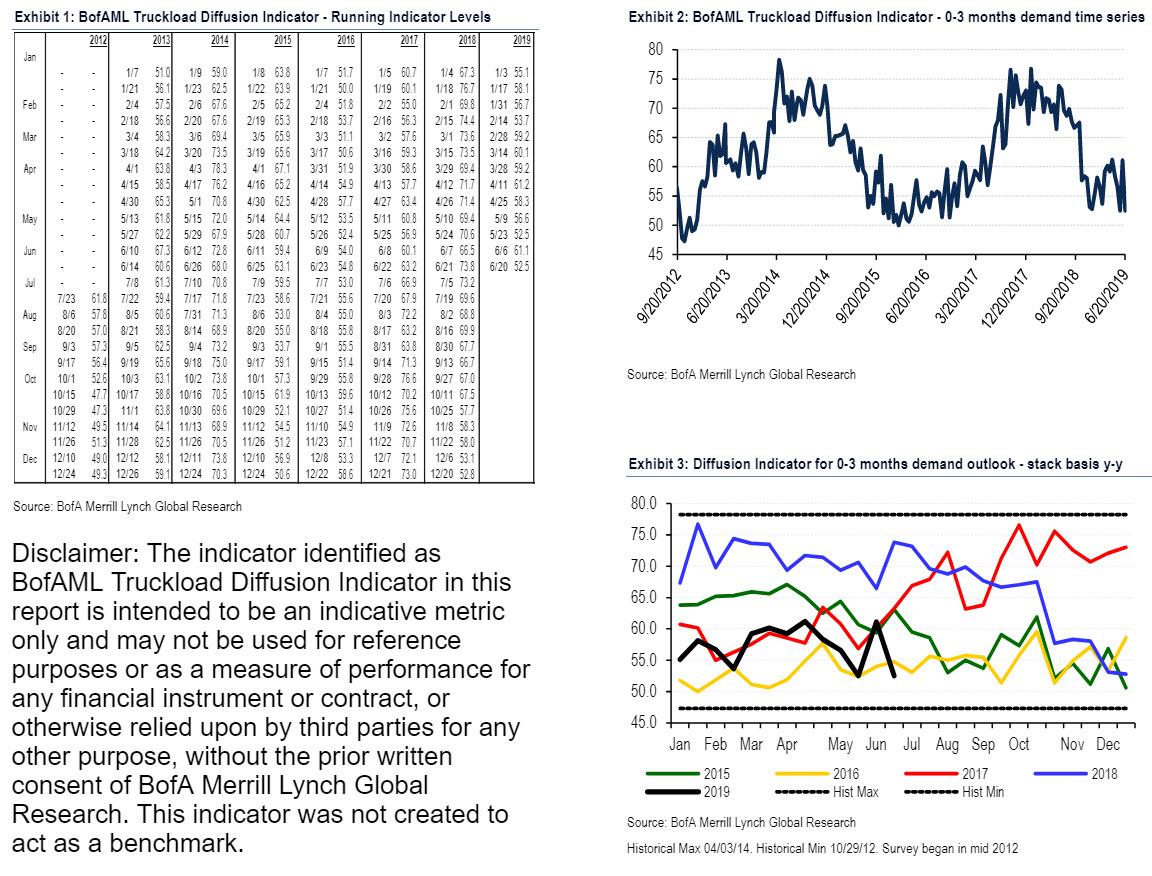 The improvement likely derived from a solid Spring week of weather, pre-shipping ahead of China (and proposed Mexico) tariffs, a 3.3% rebound in that week’s S&P 500, that week’s Road Check, a period where capacity self-removes itself from the market, which can appear to cause a contraction in available supply, and a sharp drop in net orders.

That said, the survey responses demonstrated the key reasons behind the resent plunge in sentiment: Here are some of the shipper comments received by BofA:

Going back to BofA’s trucking indicator, it returned to its downward trend experienced since a mini-peak in mid-April, following a surprising uptick last week. As BofA said at the time, it was “caught by surprise by what was the largest sequential increase in the history of our survey last issue, to 61.1 from 52.5″… but now it has plunged righjt back return to 52.5, not only matching multi-year lows, but its biggest drop in history.

BofA also notes a few truck closings (A.L.A Trucking and Penske Logistics layoffs) which are more in tune with the continued slide in the Indicator. As rail carloads are trending -2.4% quarter-to-date, our survey has hit lows from 2015-2016, and remains less than 10% above all-time lows. We do not anticipate a sharp recovery for carriers, and thus, favor companies with proven skill at navigating cycles, such as Knight-Swift (KNX, $32.61, B-1-7).

Are Entrepreneurs Born or Made?

“This Ship Is Sinking” – The Economy Is Holed Below The Waterline