Maybe Boeing will finally think twice before cutting corners and slashing costs on planes it hopes will become the standard in commercial air travel.

With Boeing’s fleet of 737 MAX planes indefinitely grounded after unexpected problems with the MCAS system costs hundreds of people their lives in two fatal crashes, tests on the grounded planes revealed a new, and unrelated safety risk in the computer system for the Boeing 737 Max that could push the plane downward the FAA announced; the discovery could lead to further lengthy delays before the aircraft is allowed return to service.

A series of simulator flights to test new software developed by Boeing revealed the flaw, a source told CNN. In simulator tests, government pilots discovered that a microprocessor failure could push the nose of the plane toward the ground. It is not known whether the microprocessor played a role in either crash.

While the original crashes remain under investigation, preliminary reports showed that “a new stabilization system pushed both planes into steep nosedives from which the pilots could not recover.” The issue is known in aviation circles as runaway stabilizer trim.

“The FAA recently found a potential risk that Boeing must mitigate,” the agency said in an emailed statement on Wednesday, without providing any specifics.

While the latest glitch is separate from, and did not involve the Maneuvering Characteristics Augmentation System linked to the two fatal accidents since October that killed 346 people, it could produce an uncommanded dive similar to what occurred in the crashes, Bloomberg confirmed, also citing an unnamed source..

Meanwhile, piling damage control upon damage control, Boeing announced it could break the chain of events that led to both crashes by developing a software fix that would limit the potency of that stabilization system. In other words, for every uncontrolled dive there is a software upgrade… allegedly. The problem is that the broader public is becoming increasingly disgusted by what is a clear culture of cutting corners and rolling out flying coffins that crash to earth the moment there is a BSOD.

Boeing engineers are now trying to address the issue, which has led to another delay in recertifying the 737 Max.
“The safety of our airplanes is Boeing’s highest priority. We are working closely with the FAA to safely return the MAX to service,” Boeing said in a statement. The sources say Boeing engineers are trying to determine if the microprocessor issue can be fixed by reprogramming software or if replacing the physical microprocessors on each 737 Max aircraft may be required.

The good news for Boeing is that despite the disastrous track record of flawed executive decisions and cut corners, its stocks has so far managed to recover every single time, if a little longer than “seconds.” Even so, it remains well below the level it hit after its second plane went down, following the infamous MCAS failure. 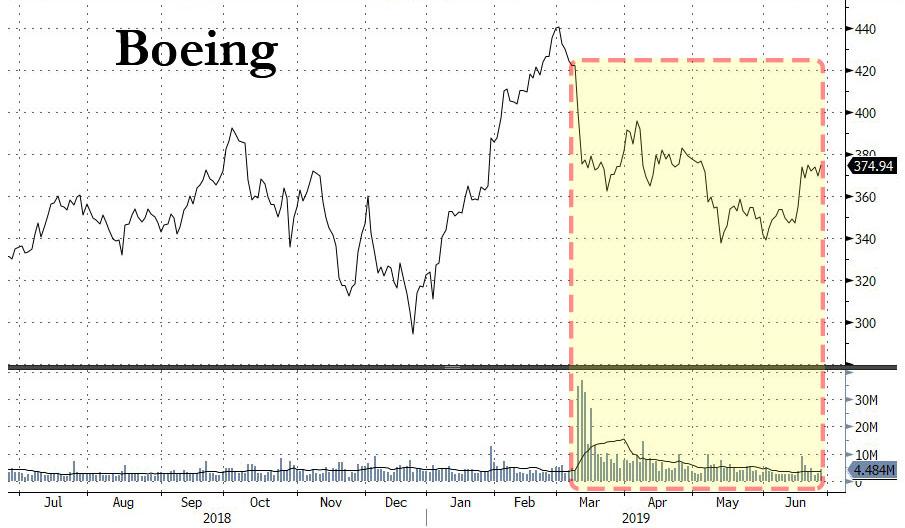 Another crash, however, and BA will find just how unpleasant gravity can be, even if the consequences of a stock crash allow (most) shareholders to live and tell all about it.