Albert Edwards: This Was The Final Recessionary Shoe, And It Has Now Fallen

Exactly three months ago, in late March, the 3 month-10 year spread inverted for the first time since 2007…

… an event which sparked near-panic in the market as historically curve inversion has preceded the last 7 recessions. 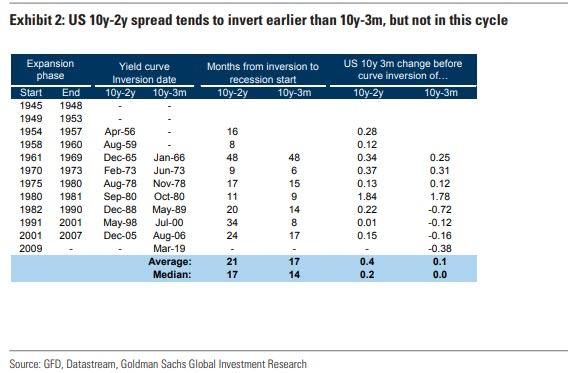 However, while the inversion was certainly a memorable event, the question on everyone’s lips is how do risk assets perform once the curve flattens and/or inverts. According to backtests from Goldman, since the mid-1980s, significant stock drawdowns (i.e. market crashes) began only when term slope started steepening after being inverted.

In other words, as we noted then, “Curve Inversion Is Bad, But It’s The Steepening After That Kills.”

Fast forward to today, when in his latest bearish missive, SocGen’s permabear Albert Edwards picks up where we left off, and in a note titled “the final recession shoe has now fallen”, he notes that while inversion of the US yield curve is seen as a reliable precursor to US recessions, “it has a long and variable lead time”, and instead “a far more immediate and present danger of recession occurs when after inversion, a rapid steepening occurs.”

In any case, as we first commented in early 2019, Edwards notes that this subsequent steepening “usually informs investors the cycle is over and it is time to flee for the hills.“

Well, for those who haven’t figured out the punchline yet, rapid curve steepening is now occurring, and as Edwards gleefully concludes, this “suggests recession may indeed either be imminent or else it has already arrived.”

Should Edwards be right, the implications are clearly huge, and not just for the economy and markets – perhaps the most dramatic consequence will be what happens with the world’s most powerful institution: the Federal Reserve.

“As a long time harsh critic of the Fed (and other central banks) for their obscenely easy money policies” Edwards writes that he is loath to criticize President Trumps nearly constant slams of Fed Chair Powell, especially since President Trump has a very clear agenda: namely, he is going to make sure the Fed gets the blame from the electorate if the economy goes into recession and the equity market plunges ahead of the next presidential election.

“And by hook or by crook, Powell will be out on his ear”, Edwards says.

Which is good news and bad news, because while Powell clearly threw in the towel on the hawkish monster that he was perceived as less than a year ago when he spooked markets that the Fed would keep hiking until the mid-3’s, and is now as dovish and meek as Yellen or even Bernanke, it’s not like his departure would also end the Fed.

Quite the opposite, because considering that this is what President Trump is like now, imagine what he will be if the US leads the global economy into another deep recession and financial crisis like 2008:

Even before the irascible Trump became President, I said the Fed would lose its (supposed) independence if they were the midwife to another crisis. There will be no deft, disingenuous shifting of blame to the commercial banks this time around. The Fed will carry the can.

As a result, Trump will promptly appoint a Fed chair who is the most dovish one can find, and here Kashkari comes to mind: after all, the former Goldman IT banker and  “architect” of the 2008 bank bailout plan (or rather Paulson’s smokescreen) not accidentally said he was hoping for a 50bps rate cut earlier this week – he is clearly angling for Powell’s job.

Meanwhile, and going back to the recession narrative, it’s not just the re-steepening of the 3M-10Y. As Edwards ominously concludes, there is another key indicator that everyone is focused on: “we (and others), have also pointed out that the alarm bells for an imminent recession would really start ringing if the 10y-2y curve began to steepen.” To be sure, it is reassuring that this has not happenied – yet – but, as Edwards concludes “the rest of the yield curve (which leads to 10y-2y steepening) is now shouting recession from the rooftops.” 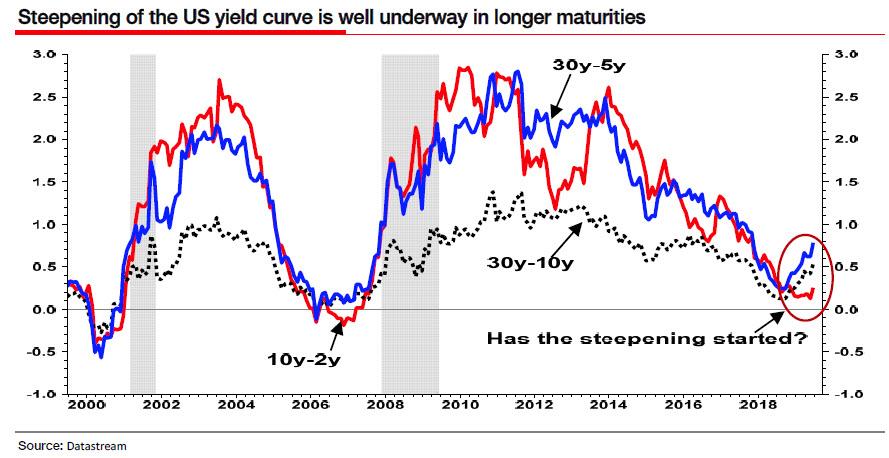 So how long until Neel “the Chump” Kashkari is Fed chair? The good news is that it will probably not happen tomorrow, so readers at least have enough time to buy some more gold and cryptos before the new Fed chair unleashes the biggest – and last – liquidity tsunami in US history, one which culminates with the dollar losing it reserve currency status. Whether that leaves Zuckerberg as the world’s central bank, or the IMF finally digitizes the SDR in Libra’s footsteps,  remains to be seen.

The Saving Problem in America: Alternatives and Reforms