Nothing Was Resolved Between The US And China, Meanwhile Global CapEx Has Ground To A Halt

And so it has come to pass: The much-anticipated meeting between the US and China is over. While we await further details, here are our reactions and takeaways, as we parse the initial readouts.

This is an uncertain pause – no immediate escalation, but still no clear path towards a comprehensive deal. The US administration has indicated that it will hold off on 25% tariffs on the remaining US$300 billion imports from China. There was also an agreement that both parties will roll back some non-tariff barriers (i.e., restrictions on high-tech exports by US companies) and that China would continue to purchase agricultural products from the US. However,as things stand, we lack clarity on whether real progress was achieved on the sticking points that caused talks to break down in the first place.

Hence, our overarching conclusion is that the developments over the weekend on their own don’t do enough to remove the uncertainty created by trade tensions, which began over a year ago and remain an overhang on corporate confidence and the macro outlook.

Uncertainty is the enemy of the business cycle

Heading into the meeting, it was clear that the global capex cycle had ground to a halt. Capital goods imports, a capex proxy, began their descent in mid-2018, when trade tensions first re-emerged. In July 2018, they were tracking at 18%Y on a three-month moving average basis but plummeted to 2%Y in January 2019 and an estimated -3%Y in May 2019. In aggregate, private fixed capital formation (investments in fixed assets) in the G4 and BRIC economies fell from a peak of 4.7%Y in 1Q18 to just 2.8%Y in 1Q19. 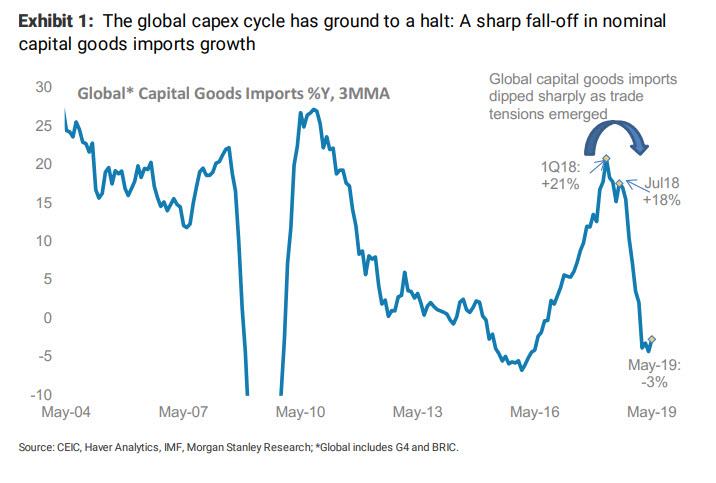 Corporate sentiment has also declined to multi-year lows. Global PMIs for May fell in broad-based fashion, with only about one-third of the countries we track reporting a PMI above the 50 expansion threshold. In the US, our Morgan Stanley Business Conditions Index recorded its largest one-month decline ever, plunging to a level not seen since June 2008. Other business sentiment gauges, such as the regional Fed and German Ifo and ZEW surveys for the month of June, paint a fairly bleak picture too. What’s more, consumer sentiment is also starting to sour, with the Conference Board’s Consumer Confidence Index for June falling to the lowest point since September 2017.

A key reason why we worry about downside risks is that the adverse impact of trade tensions is non-linear. As earnings growth slows and uncertainty and costs rise, the levered corporate sector will face tightening financial conditions. Given higher corporate leverage, this will probably be most pronounced in the US, particularly for companies with weaker balance sheets. Defaults could accelerate, bringing corporate credit risks to the fore, thus amplifying the initial trade shock  with even tighter financial conditions, which could impair lending, weaken confidence further and exacerbate the slowdown in growth.

Rekindling animal spirits will not be easy

Within the macro environment of a late-cycle expansion, reviving corporate confidence and lifting capex are of paramount importance. Unfortunately, the current backdrop of a weak starting point and lingering trade tensions does not inspire confidence.

It’s true that, by all indications, we will soon get rate cuts from the Fed, and it looks as if the ECB is contemplating extra stimulus, which may include rate cuts  and perhaps a restart of QE. Meanwhile, China has renewed efforts to implement its stimulus measures. Given its overarching objective of stabilising the labour market, we expect the fiscal package to be increased to 2.25% of GDP and monetary accommodation to be provided, with a goal of 12.5-13.0%Y broad credit growth by year-end. Dovish developed market central banks and subdued inflationary pressures in emerging markets (EM) will also create room for easing by a number of EM central banks.

However, these easing efforts will impact the economy with lagged effects. Policy easing is necessary but won’t be sufficient to revive corporate confidence and engineer a strong pick-up in growth. That would require a combination of monetary easing and an all-clear signal on both trade policy and geopolitics.

In sum, we see the ebbs and flows of policy support determining swings in the cycle but ultimately producing sub-par growth. With the capex cycle curtailed, the runway for this global expansion is therefore shorter than it would have been absent the re-emergence of trade tensions.

Indeed, notwithstanding the resumption of talks, scope remains for re-escalation to emerge. Tracking how the talks evolve from here and in particular the critical issues related to speed of tariff removal,non-tariff barriers, intellectual property rights and amount of purchases will be key. Should we see re-escalation (i.e., the US imposes 25% tariffs on the remaining US$300 billion of imports from China and they remain in effect for 4-6 months), it would heighten the risks to the global cycle, and we could wind up in a global recession in about three quarters.