With the US closed for Trump Military Parade Day (also known as the 4th of July), and global markets drifting merrily in virtually non-existant volumes, stocks are where we left them at the close on Wednesday, with US futures celebrating not only today’s holiday but also the longest economic expansion in history in style – with the S&P, Dow Nasdaq all at all time highs, and the Emini just above 3,000.

Meanwhile, around the globe government bonds holding near all time lows on Thursday on the hope that economic data deteriorates further, and that a recession, or worse, forces the Fed and other central banks to unleash ZIRP, NIRP and more QE, has pushed world stocks to new 18-month highs.

With US markets closed, there was little action elsewhere: European bourses were flat, with Europe’s Stoxx 600 unchanged amid thin volumes. Earlier in the session, Asian stocks advanced, following a jump in U.S. equities, on appetite for riskier assets and bets on global easing. Most markets in the region advanced, with Japan and Vietnam leading gains. Utilities and technology were among the top-performing sectors. The Topix gauge rose 0.7%, driven by SoftBank Group and Toyota Motor, as campaigning starts for Japan’s upper house election. The Shanghai Composite Index dropped 0.3%, with Jiangsu Hengrui Medicine and Foshan Haitian Flavouring among the biggest drags. U.S.-China trade talks will resume with phone calls in the coming week, said Larry Kudlow.

Perhaps the session’s most notable move was the German 10-year Bund yield falling below -0.4%, dropping as low as -0.49%, piercing the rate set by the ECB’s -0.40% deposit rate for the first time — a sign that markets are expecting more rate cuts out of the ECB.

Other benchmark debt yields also held near record lows in the wake of their recent rally. U.S. 10-year Treasury notes had hit their lowest since November 2016 on Wednesday, pushed down by bets that the European Central Bank’s next head will maintain a dovish policy stance to buoy the euro zone economy. Italian 10-year bond yields stayed close to their lowest since late 2016 after the European Commission dropped its threat to discipline Rome over its public finances, pushing the country’s main bourse to a new two-month peak.

“For central banks, everyone is expecting dovish moves, not only for U.S. but also for Europe and even Japan,” Christophe Barraud, chief economist at Market Securities in Paris, told Reujters. “Everybody is a optimistic for quick central bank moves.”

The fall in U.S. Treasuries came after a barrage of economic data disappointments out of the US, capped by the ADP report showing that U.S. companies added fewer jobs than expected in June, raising concerns the labor market is softening even as the current U.S. economic expansion marked a record run last month. Meanwhile, the Citi US Econ surprise index is trading near the lowest levels observed since the financial crisis. 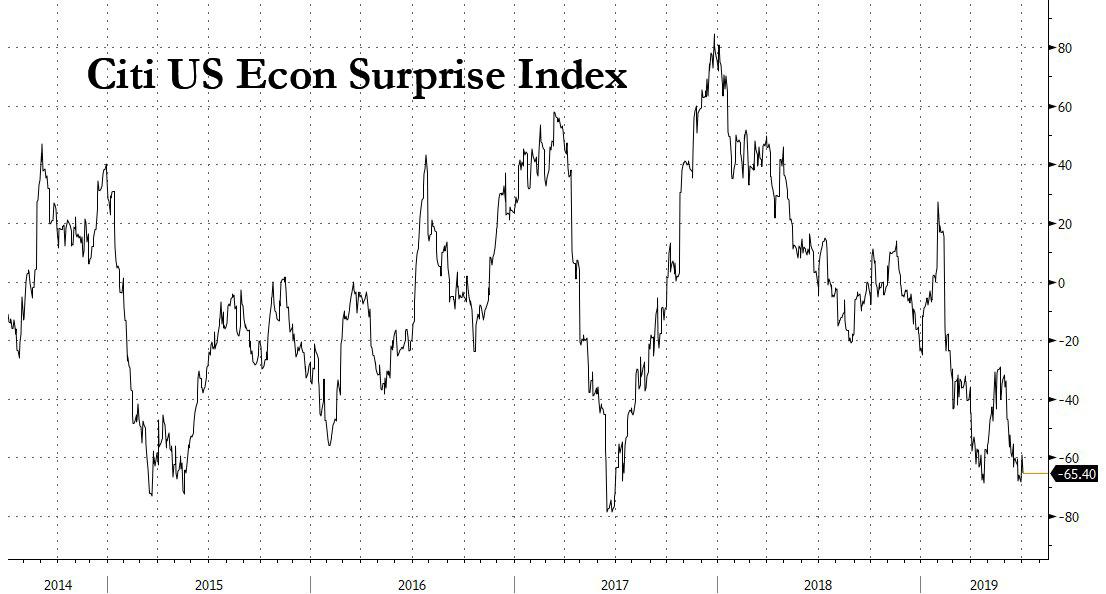 There was continued weakness in the dollar after President Donald Trump on Wednesday repeated his call for the United States to devalue the USD, and match efforts by China and Europe to manipulate currencies and pump money into their economies.

In FX, continued expectations for rate cuts by the Fed saw the dollar drift away from recent highs amid light flows as most pairs stay range bound. Weaker-than-forecast private U.S. employment data on Wednesday spurred concern that Friday’s jobs data could follow suit and boost the case for lower interest rates. That said, currencies were by and large quiet in early European trade. The euro traded at $1.1284, a touch higher than its two-week low of $1.1268 touched on Wednesday. FX strategists cited by Reuters, said that although the drop in U.S. Treasury yields overnight was negative for the dollar, softness in other currencies was lending some support.

“We are seeing some euro weakness and some dollar weakness, and the two are cancelling each other out,” said Thu Lan Nguyen, FX strategist at Commerzbank. “What is happening in U.S. and euro zone monetary policy will also determine what happens in smaller countries,” she added.

In commodity markets, oil fell on data showing a smaller-than-expected decline in U.S. crude stockpiles and worries about the global economy. Brent crude futures, the international benchmark for oil prices, were flat at $63.84 per barrel by 1109 GMT.

After taking a breather today, US investors will now focus on Friday’s U.S. non-farm payrolls, which economists expect to have sharply rebounded to 160,000 in June compared with 75,000 in May; the number will be closely watched for clues on the Federal Reserve’s next move due in just 4 weeks.

“Friday’s data is important to the extent that it will calibrate expectations for what the Fed could deliver later this month,” said Ned Rumpeltin, European head of FX strategy at Toronto-Dominion Bank in London. “It is more about confirming the market’s current bias rather than setting fresh expectations.”