This continues the swarm of aftershocks that has hit all day… (Seismologists at Cal Tech said Friday afternoon that there had been around 1,400 aftershocks since Thursday’s 6.4-magnitude quake, with 17 of those with a magnitude of 4 or above.)

It was big enough to felt on the east coast…

The news and accompanying video started to surface on Twitter at around 11:30pm EST on Friday night. The Dodgers even played their baseball game through the quake:

They were playing through an earthquake. The players didn’t even feel it. IT WAS A 7.1 😳 #EarthquakeLA pic.twitter.com/A4lo6rQE81

Here in Palm Springs and just felt a massive #earthquake a few minutes ago. Woah. Check out the pool moving for a minute. #earthquakeLA #palmsprings #woah pic.twitter.com/WrervE7U4t

BREAKING: Receiving first photos from a contact in #Ridgecrest from inside her house after massive quake. Says she’s cut. @FOXLA pic.twitter.com/Gx3rXbRhNO

NBC LA reports gas leaks and fires have been reported.

Friday night, the power went out in Ridgecrest, a city of 27,600, around 100 miles north of Los Angeles, according to NBC reporters in the area.

The San Bernardino County Fire District tweeted that calls were coming in from northwestern communities and that people were reporting “homes shifted, foundation cracks, retaining walls down.”

We have word of wires down (never touch!) and *localized* power outages in several City of Los Angeles neighborhoods. Our citywide survey by @LAFD crews continues, but besides a handful of apparently small issues, NO major damage to infrastructure has been identified.

The fire district reported one minor injury and said firefighters were treating the patient. “No unmet needs currently,” the fire department said.

As we detailed earlier, the strongest earthquake to hit southern California in nearly 2 decades has also resulted in an unusual number of aftershocks, seismologists are saying. The quake has already prompted one city to declare a state of emergency Thursday and affected residents from Las Vegas to Orange County, according to the Mercury News.

The quake registered a 6.4 on the Richter scale and was centered about 150 miles north of Los Angeles. An astounding 159 aftershocks of magnitude 2.5 or greater have been recorded already. This is a higher than normal, with the largest aftershocks registering at 4.6.

Seismologist Lucy Jones called it a “robust” series of aftershocks and says there’s a 50% chance of another large quake in the next week. She also said there is a 1 in 20 chance that a bigger earthquake will hit within the next few days.

She commented that earthquakes actually increase the risk of future quakes.

“It’s certain that this area is going to be shaking a lot today, and some of those aftershocks will probably exceed magnitude 5.”

“Plate tectonics hasn’t suddenly stopped; it is still pushing Los Angeles toward San Francisco at the same rate your fingernails grow — about 1.5 inches each year… Their motion cannot be stopped any more than we could turn off the sun,” Jones wrote in her recent book.

Earthquake scientists Ross Stein and Volkan Sevilgen, writing on their blog at Temblor.net said that this quake may have just made things worse for the area.

The two wrote that they believe that parts of three other faults — in remote areas of California — were actually “brought closer to failure by the 4th July quake.”

The earthquake, now named the Searles Valley Quake, was preceded by 4.2 magnitude foreshock.

This has caused the city of Ridgecrest to declare a state of emergency, with the mayor citing five fires and broken gas lines as part of the city’s problems. There were also power outages that affected 28,000 residents. Meanwhile, the forecasted high temperature for the area is 100° today.

Near the epicenter of the quake, the fire department responded to more than 20 incidents, including fires and medical emergencies. Ridgecrest Regional Hospital was evacuated and about 15 patients from the emergency room were taken to another hospital. The facility is currently being inspected. 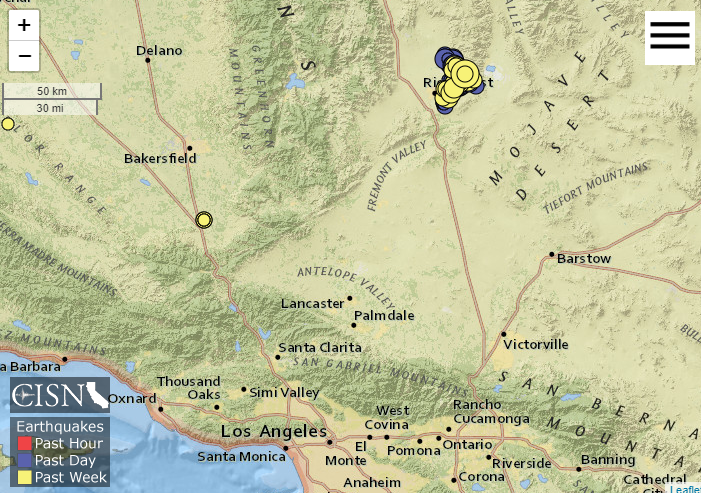 Another, directing a Fourth of July kids program, said that the quake startled the 65 children on stage. “It was terrifying,” she said.

Many residents near the area upset because the city’s smartphone app – set up to warn of quakes – didn’t send a warning in advance.

The earthquake was also felt in Las Vegas. It was the largest quake to hit southern California since 1999, when a 7.1 earthquake hit in the Mojave Desert. In 1994, a 6.7 magnitude quake hit Los Angeles, causing $25 billion in damage.