Iran is preparing to begin construction on a large railway that links their capital city of Tehran to the Syrian coastal city of Latakia, the Director of Syrian Railways Najib Al-Fares said on Wednesday.

According to Fares, the new railway will promote regional trade between Syria, Iraq, and Iran. The new project is expected to be funded by the Iranian government, with support from both Syria and Iraq.

The Director of the Iraqi Railway Company, Jawad Kazim, said that Iraq had previously signed contracts to implement projects with Iranian companies, but most were delayed.

For Syria, the new railway system is expected to help ease their economic issues that have derived from the U.S.-led sanctions on the Levantine nation.

During the signing of the minutes, [Iranian Deputy Minister and Chairman of Roads Maintenance and Transport Organization] Shahram Adamnejad said that the tripartite meeting resulted in positive outcomes among the three sides, affirming that the goal of the negotiations is to activate the Iranian-Iraqi-Syria load and transport corridor as a part of a wider plan for reviving the Silk Road as the three countries have an old experience in the international trade. — Syria’s SANA

While this should be beneficial for all parties, this new railway system will face heavy criticism and possibly military attack from the U.S. and its allies, most notably Israel.

Israel has paid close attention to the Iranian developments in Syria and has often acted when they suspect weapons are being transported across borders. 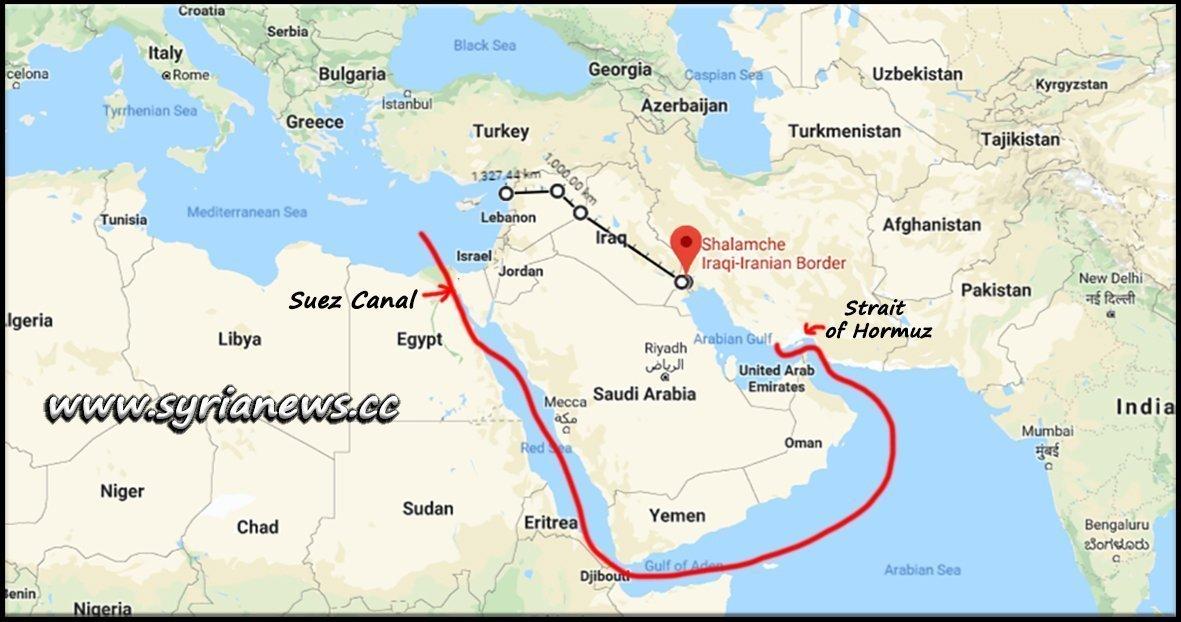 Map via Syrianews.cc: Iran will bypass the Strait of Hormuz, Arabian Sea, Gulf of Aden, Red Sea and Suez Canal to reach the Mediterranean.

The U.S. is likely currently opposing the Syrian Arab Army’s (SAA) control over the border city of Albukamal in Deir Ezzor because it allows Iran to build a land bridge along the international highway.