Libya To Release All Migrants From “Detention Camps” After Tripoli Attack

In a move that will likely result in even greater political instability in Europe, which in recent years has become the primary target for every migrant holed up in Libya and just waiting for the chance to cross the Mediterranean, The New Arab reports that Libya’s UN-backed government is contemplating shutting down slave migrant detention centers and releasing all the detainees for their own safety, after airstrikes targeted one such center on Tuesday in a devastating attack which killed at least 53 people.

The strike left at least 130 wounded when it hit a hangar in which the migrants were detained in the Tripoli suburb of Tajoura. In the aftermath of the deadly bombing, Fathi Bashagha, the interior minister of Libya’s Government of National Accord (GNA) told the assistant to the UN special envoy to Libya, Maria do Valle Ribeiro, his government was accountable for the safety of Libyan civilians, including detained migrants.

However, Bashagha said the authority did not have the capacity to protect the centers in the face of airstrikes from advanced F16 jets, according to ministry. 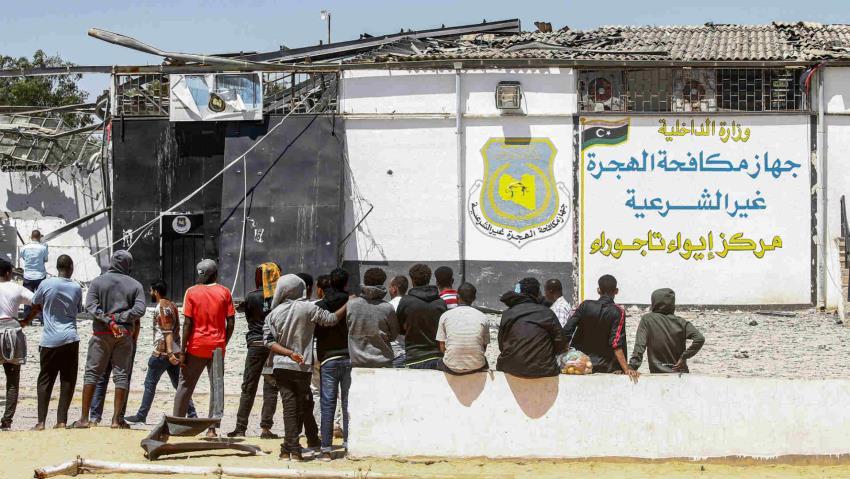 Ribeiro also discussed the Tanjoura attack with Mohammed Al-Shibani, Libya’s deputy interior minister for migration affairs, agreeing on the need to transfer the hundreds of survivors to safer accommodation.

The Libyan justice ministry condemned the attack, vowing to work with humanitarian and migration organisations to repatriate the migrants or resettle them in third countries, because Libya’s compromised security situation could not provide them the safety they require.

Despite this, it was revealed on Thursday that around 300 migrants of the centre’s original 600 detainees were still being held there, while the International Organisation for Migration (IOM) said it was providing humanitarian assistance to the remaining detainees. The IOM was unable to confirm reports that dozens of migrants had fled on Tuesday night after the raid.

The UN’s humanitarian office OCHA, quoting survivors, said guards at the centre fired on migrants trying to flee causing no casualties, but the GNA interior ministry denied this as “rumours and false information”.

Needless to say, a similar rumor in the US – where migrant detention centers have become the focal talking point in domestic politics – could well spark a second civil war.

The IOM said its teams had “located” and transferred to hospital “a group of injured migrants who left Tajoura after the attack in the surrounding neighbourhood”. “Innocent lives were lost in the attack on Tuesday night, and immediate action is needed from all sides,” the IOM’s Libya chief of mission, Othman Belbeisi.

Naturally, the GNA and its arch-foe, militia leader Khalifa Haftar traded blame for the deadly assault, but despite a storm of outrage, a divided UN Security Council failed to unanimously condemn the attack in an emergency meeting Wednesday after the US did not endorse a proposed statement.

Migrants from Algeria, Morocco, Sudan, Somalia and Mauritania as well as other African nations were among the victims, Amin al-Hachmi, a spokesperson for the GNA health ministry said. The majority of migrants at the centre in Tajoura, a suburb east of the capital Tripoli, were from Eritrea and Sudan.

Two of the five hangars that made up the centre were hit by the air strike, while “hangar number 3”, which housed more than 120 migrants, took a direct hit.

According to the IOM, of the more than 600 migrants detained in Tajoura, 187 were registered with its “Humanitarian Voluntary Return” programme, which helps migrants go back to their home countries.

“The IOM continues to call for an end to the arbitrary detention and reminds all parties that civilians are not a target,” it said in a statement.

Some 3,300 migrants are still detained in and around the Libyan capital in centres “considered at-risk” in light of the fighting between the opposing forces of Hafter and the GNA, the IOM added.

Crater left behind by the missile that went through the roof then explodes amid the migrants. Another hit a building about 50 metres away. pic.twitter.com/9cXLKp4WWX

Rights groups say migrants face horrifying abuses – with many sold into slavery or worse – in Libya, which remains prey to a multitude of militias vying for control of the oil-rich country and which has emerged as a northern African proxy war between various middle-eastern nations. Their situation has worsened since Haftar – supported by the UAE, Egypt and Saudi Arabia – launched on 4 April an offensive to conquer Tripoli, where the Turkey-backed GNA is based.

UN agencies and humanitarian organisations repeat regularly their opposition to the return of migrants arrested at sea to Libya, where they find themselves in “arbitrary detention” or at the mercy of militias. The North African country that has been wracked by chaos since the 2011 uprising against dictator Moammar Gaddafi.