Key Events This Week: All Eyes On Powell Again

Just in case you had an urgent craving of even more Fed talk, the US central bank will once again be under the spotlight this week with Powell due to testify before Congress on the US economy and monetary policy while a busy schedule of Fedspeakers is also scattered throughout the week. We’ll also get the latest FOMC meeting minutes and US CPI and PPI data. And days after a blistering payrolls report which slammed near-term rate cut odds, inflation data is also due to be out in Europe and China while the UK PM voting process begins.

As DB’s Craig Nicol notes, the main highlight for markets this week will be Fed Chair Powell’s testimony before the House Financial Services Committee on monetary policy and the state of the US economy on Wednesday. With markets cutting their odds for the Fed cut during the next meeting after the latest NFP report, the content of the speech has the potential to meaningfully impact market expectations. Powell will also testify before the Senate on Thursday though this will be a repeat of Wednesday’s speech.

It’s also a very busy week for Fedspeak: on Tuesday Bostic and Bullard address a conference in St Louis while Quarles will make a keynote address on stress testing with Powell due to make introductory remarks. On Wednesday we’re due to hear from Bullard again while on Thursday we’re expecting comments from Williams, Bostic, Barkin, Kashkari and Quarles.

Staying with the Fed, on Wednesday we’re due to get the FOMC meeting minutes from the June meeting. While rates were left unchanged at the meeting, the overall tone was decidedly dovish and it somewhat confirmed markets’ aggressively  pricing in an easing cycle. A reminder that the statement dropped the commitment for patience and the dots also swung in a similarly dovish direction. A reminder too that this meeting included a dissenting vote from Bullard.

As for politics, US trade negotiators are expected to return to Beijing next week. Meanwhile, in the UK Conservative Party Members will continue the postal vote process to choose between Boris Johnson and Jeremy Hunt to be the next UK PM. The candidate achieving more than 50% of the vote will be declared Leader of the Party, however the winner isn’t  expected to be announced until July 22nd.

As for data, we should get to test the global inflation pulse next week. The June CPI report will be out in the US on Thursday followed by the June PPI report on Friday. The consensus for the former is a 0.0% mom headline reading and  +0.2% core reading which should be enough to hold the annual rate at +2.0% yoy. We’ll also get June CPI and PPI data in China on Wednesday while in Europe we get final June CPI revisions for Germany and France on Thursday. 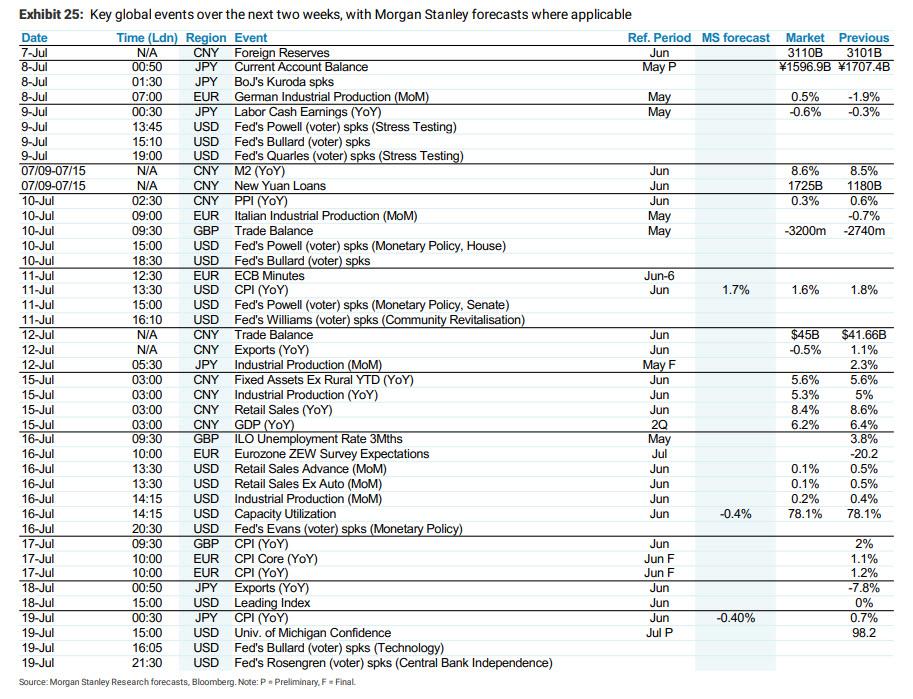 The remaining data in the US next week is fairly second tier with May consumer credit due on Monday, May JOLTS and June NFIB survey on Tuesday, May wholesale inventories due on Wednesday and jobless claims on Thursday. It’s a bit more interesting in Europe where May industrial production prints are due in Germany on Monday, the UK on Wednesday and euro area on Friday. In the UK we also get May GDP on Wednesday.

As for other central bank speak next week, on Monday the BoJ’s Kuroda is due to speak at a branch managers meeting. On Tuesday the ECB’s Visco speaks in the morning before Chief Economist Lane takes part at an event during the evening. On Wednesday the BoE’s Tenreyro speaks while on Thursday Carney speaks. Finally on Friday we’re due to hear from Carney again along with the BoE’s Vlieghe and ECB’s Visco.

Finally, other events to keep an eye on include the euro area finance ministers due to gather in Brussels
for a two-day meeting on Monday. On Wednesday we’ve got the BoC meeting while on Thursday we get the ECB minutes from the June policy meeting and the BoE’s financial stability report.

Summary of key events in the week ahead courtesy of DB’s Craig Nicol:

Finally, here is Goldman’s preview of just the US, where the key economic data release this week is the CPI report on Thursday. Minutes from the June FOMC meeting will be released on Wednesday. There are several scheduled speaking engagements from Fed officials this week, including Chair Powell’s semiannual testimony to Congress on Wednesday and Thursday. 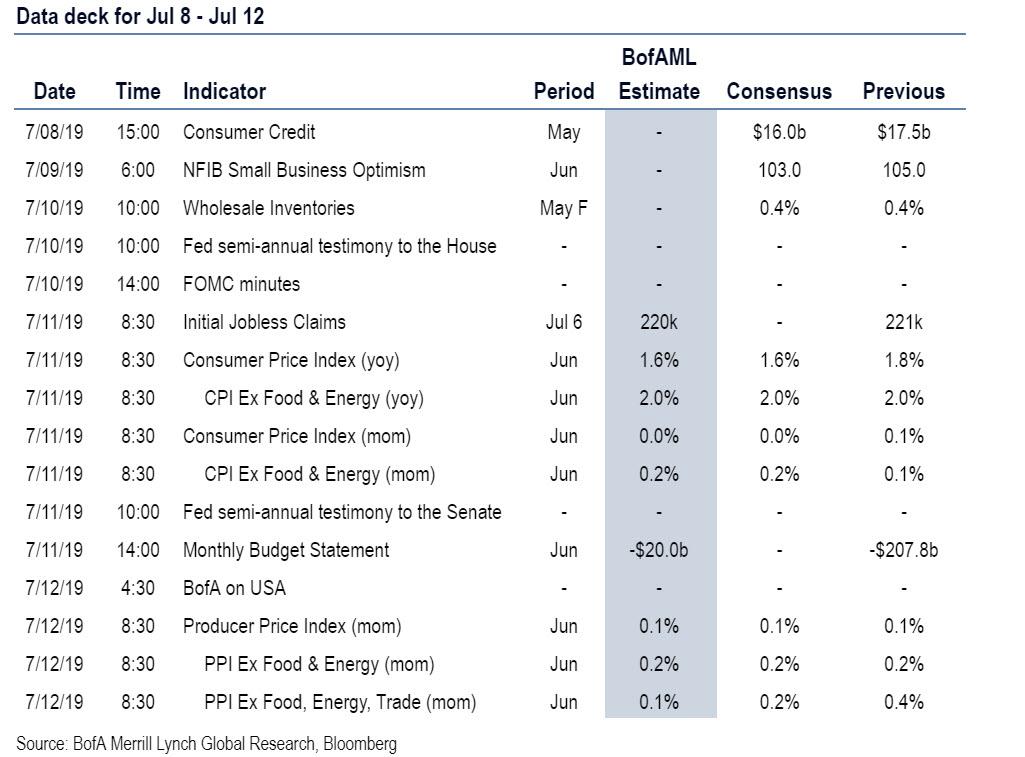