If the dwindling bee population across the US wasn’t enough, new footage uploaded onto social media shows, in one instance, thousands of bees dropping dead upon a series of earthquakes that shook California last week, reported Sputnik.

Southern California was hit by two earthquakes late last week: a 6.4 magnitude quake on Thursday, accompanied by a 7.1 magnitude earthquake Friday evening, both with an epicenter near the Mojave Desert.

On Saturday morning, blogger Khalil Underwood from California uploaded the footage onto Twitter of thousands of dying bees spread across his driveway following the massive quakes.

I wasn’t exagerating or joking last night….. after the Earthquake thousands of bees were vibrating on the floor and dying…. this shit was so crazy to me. pic.twitter.com/qqCpBVhuyd

A terrified Underwood told his followers: “This is crazy. I’ve never witnessed anything like this.”

“Look how many f***ing bees are on the f***ing floor from the earthquake.”

He first tweeted there was “like 70 [bees] on the floor just buzzing & dying,” but later said, “I wasn’t exaggerating or joking….. after the Earthquake thousands of bees were vibrating on the floor and dying…. this shit was so crazy to me.” 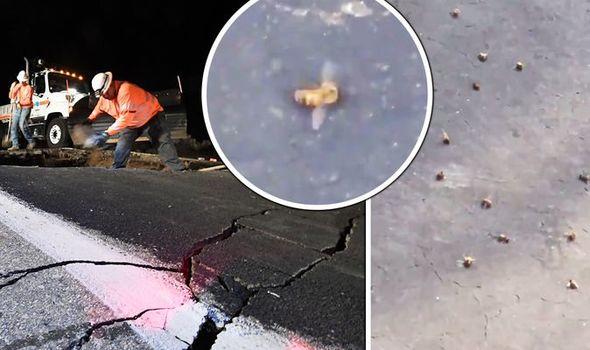 Over 500 responses had people from all walks of life try to explain what exactly happened to the bees.  Some suggested the quake had distorted the magnetic fields the bees’ brains were dependent on leaving them disoriented.

I believed you when natural disasters happen animals and insects are sensitive to it. Even more when it comes to the vibrations of an earthquake.

Found this link on bees & earthquakes. If they left a hive in a panic, they didn’t feed before leaving, they would normally do if swarming. On going aftershocks & possible damage to hive have them disorientated & without food. I’m guessing though. https://t.co/GAfbg2h3XY

​”I just read that they abandon the hive during earthquakes, and return when it’s over. The constant aftershocks could be keeping them from ‘homing, which is probably not good”, one Twitter user wrote, while another associated the bee deaths to fluctuations in the Earth’s magnetic field during quakes.

There is no definitive answer as to why the bees died after the quakes.

However, a study from Taiwan during two significant earthquakes in 1999 and 2002 showed a catastrophic effect on insect communities, resulting in “large declines in total individual number but also total species number of insects.”

The US Geological Survey (USGS) had previously said it is “possible” a “seismic-escape response” may have triggered animals’ natural instincts to escape predators.