For the third time in mere weeks, German Chancellor Angela Merkel was seen visibly shaking during another high-profile diplomatic meeting, this time as she welcomed Finnish Prime Minister Antti Rinne as the countries’ anthems played.

The German Chancellor was seen shaking beside German President Frank-Walter Steinmeieras she swore in the new justice minister at Berlin’s Bellevue Palace in late June.

Prior to this instance, she appeared unsteady and in distress when meeting  Ukrainian President Volodymyr Zelensky in mid-June as the national anthems of the two countries blared at an event in Berlin.

And now for a third time…

Merkel shrugged it off when asked:

“I am feeling good,” she told reporters, adding the issue wasn’t anything affecting her leadership abilities.

“I said recently that I am in a phase of working through what happened at the military honors ceremony with President Zelenskiy. It’s obviously not fully completed, but there has been progress and I will have to live with it for a while,” she said referring to the first trembling incident that occurred last month during a ceremony on a hot afternoon alongside the Ukrainian leader.

“I am feeling very good, and there is no reason for concern,” she added.

As Bloomberg notes, the latest scare puts pressure on Merkel’s office to provide fuller transparency about her health. Until now, the shaking episodes were attributed to dehydration and the subsequent psychological effects.

But, perhaps, as Tom Luongo details below, Merkel has good reason to shake…

Yesterday’s note about German chemical giant BASF at Zerohedge urges me to remind you that I warned Germany’s economy was falling off a cliff back in April.

I took a little flak for it then. But it should be clear now that the heart of the European Union has arrhythmia. And no amount of Mario Draghi stimulus will shock it back into beating normally.

BASF now expects Q2 EBIT of just €500 million, a whopping 60% below consensus expectations. For the full year, BASF expects EBIT before special items to decline by 30%, compared with a previous estimate for growth of between 1% and 10%. The top line gets whacked too as BASF now expects a slight decline in 2019 sales compared with the full year 2018 vs previous forecast of slight sales growth of 1-5%.

BASF, like its auto industry, are the symbols of Germany as export powerhouse. But who do they sell these things to if everyone’s credit card in Europe is maxed?

China is engaged in a major struggle with the U.S. over trade and its own internal banking issues.

The U.S. economy is approaching the end of its run as safe-haven flows out of Europe keep our asset prices at unearned/lofty levels.

Mike Shedlock went over the situation with manufacturing and inventories recently. And the picture is not good at all.

1. Inventories are up 10 of the last 11 months to new record highs.

2. Even non-transportation inventories are near the all-time high.

4. But excluding transportation, new orders year-over-year are barely in positive territory at +0.28% growth.

As I mention in my latest for Money and Markets, this gives a picture, “of a domestic economy that is only showing strength because of nominal government spending while the actual economy continues to deteriorate. When you run the biggest budget deficit in history by a wide margin it’s going to produce some jobs. But it just won’t produce any productive jobs.”

It’s a classic Austrian critique of low-interest rates causing a mismatch in pricing signals for capital. Consumption is still stimulated because asset prices are high and people ‘feel rich’ to buy a new mortgage or even refinance at these insanely low rates, but there isn’t any real demand for expanding consumption.

This is why inflation stays low while consumer confidence remains high.

Meanwhile, as ZH points out, companies issuing negative guidance is close to an all-time high and both the Fed and the ECB are looking at more accommodation because despite the money printing, it’s a deflationary environment. 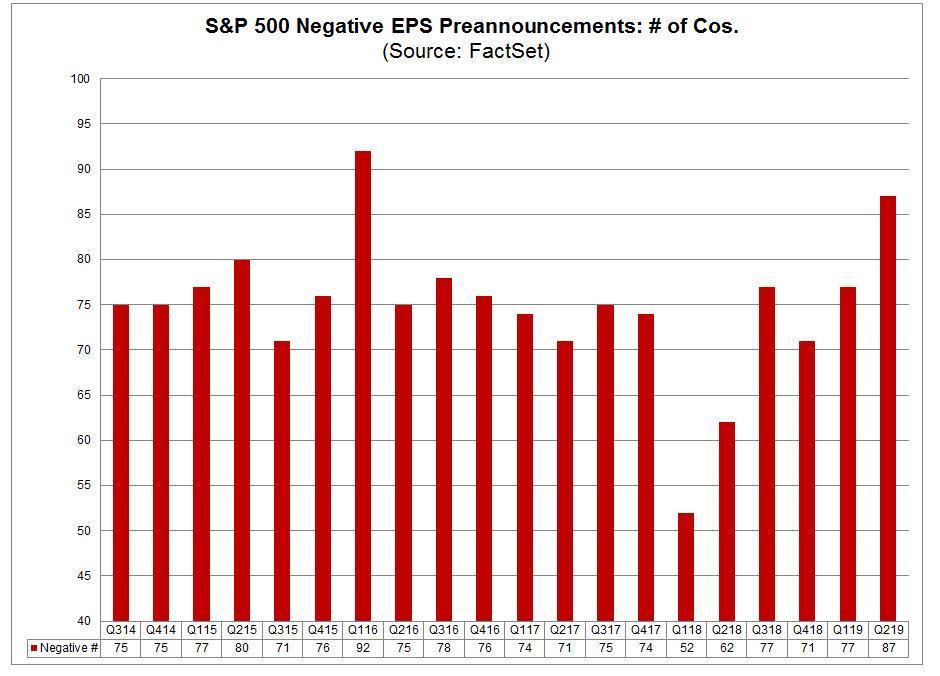 This German slowdown is having profound effects on their political system as Angela Merkel’s ruling coalition is faltering by the day. The polls keep turning farther against her and something will give in the coming months.

The SPD/CDU/CSU coalition is barely holding 40% of the electorate. And there is no possibility of the a coalition with the surging Greens. The Social Democrats are in a death spiral they cannot get out of without dissolving their relationship with Merkel.

The German political center simply can’t hold the country together with a faltering economy, Deutsche Bank cutting itself out of the global banking market and major German industries suffering as the world slows down, we’ll see more people gravitate to harder positions.

This fall’s elections in AfD strongholds Brandenburg, Thuringia and Saxony will be very telling. Polling there is spotty and all we have to go on is the EU election results which no one in Brussels or Berlin were happy about.

And there AfD shocked everyone winning those three states. AfD still needs a strategic re-think to break through the fog of German virtue signaling about their World War II guilt. But if the economy continues to falter and, potentially implode, as European debt detonates, then expect Merkel’s CDU to take the brunt of the damage.

It’s all lining up for an October to remember. Brandenburg and Saxony go to the polls on September 1st.

Join my Patreon if you think central bankers have destroyed the economy. Install Brave if you want to get free of Google and help support your favorite creators directly.

For The First Time Ever, Greece Issues Negative Yielding Debt