A Funny Thing Happened On The Way To The Fed Cut…

That’s the title of JPMorgan’s Daily Economic Briefing, and the only correction to Joe Lupton’s daily recap we would make is that the “funny thing” wasn’t one but quite a few.

Let’s start with the S&P500 which today closed at 2,999.91, confirming yet again that the “gamma gravity” monster perched atop 3,000 which we detailed last week was the primary force behind the market’s flows. 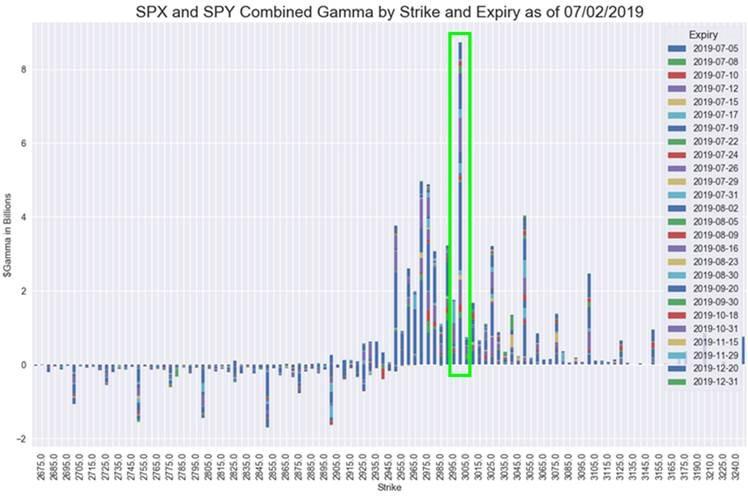 How Powell will announce and justify a 25bps, or maybe even 50bps, rate cut in three weeks, well that’s his problem.

But it’s not just the market.

So with i) the market at all time highs, ii) unemployment at all time lows, iii) payrolls printing above the highest wall street forecast, iv) core inflation above 2.0% and in the range of 2.0 to 2.2% for 11 months in a row confirming that the Fed is right where it should be based on its real mandate, v) US and China trade war currently in a tentative truce the Fed’s next move is… to cut!!??

Of course, as JPMorgan concedes, not all is good news “and so it is understandable that Chair Powell remained committed at today’s Senate testimony to the storyline supporting action in July.” What is in the red column: primarily, the global backdrop remains concerning, as business sentiment continues to deteriorate and the disinflationary headwinds from slowing PPI growth will weigh on corporate profits through the current quarter at least. Combined, this is damping global capex growth and feeding back to weakness in global industry.

Of course, Powell and the rest of the FOMC know the US is not immune to these factors, but since when is it the Fed’s job to make insurance rate cuts – “shocking” ones as Neel Kashkari suggested, demanding a 50bps rate cut – to offset the world’s problem? Ignore that particular rhetorical question: after all 4,000 on the S&P is in sight, and the last thing Powell wants is for Trump to replace with him Draghi, if the market ever has a down day.

That’s not all: to justify its dovish posture, Powell will point out the growing disagreement over what was accepted at the G20 regarding Chinese agriculture imports, which spilled into the headlines today, a reminder that the trade war could flare up at any moment.

Lastly, while the Fed likely feels vindicated in fading the very soft core inflation readings earlier this year, they will also likely fade the strong reading in June as transitory payback.

So while the case for a 50bp cut has been undermined, JPMorgan is confident that the case for 25bp remains firmly in place, although whether this is followed by 25bp in September “will be highly data dependent.”

Away from external politics, there are also internal matters to consider, namely that along with the trade war, US fiscal matters will also be in focus. Along with the need to pass an annual budget that includes an extension of the spending levels agreed to in the February 2018 budget deal, Congress needs to raise the debt ceiling. While expectations had been that Treasury could scrape by until October, this week Sec. Mnuchin suggested the “drop-dead” date may come as early as mid-September. Congress goes on recess starting July 26 and does not return until September 10, leaving little time to strike a deal. Speaker Pelosi today indicated plans to deliver a package that would combine a 2-year budget that extends spending levels with an increase in the debt ceiling. Whether the Senate will pass the suggested package is unclear.

None of this matters, however, as the real reason why the Fed is launching rate cuts, which will eventually culminate with ZIRP and QE is that the Fed will soon have to step in and start monetizing US debt whose issuance is set to explode in 2020 and onward, especially since foreign buyers, as the TBAC warned several months ago, have not added to their net US Treasury holdings in years, and with China set to post a current account deficit this year, the last thing China will focus on is buying US debt when it will need foreigners to buy its own bond issuance instead…