Barclays Was Right: It Is A Melt-Up; And This Is How BofA Expects It Will End

Three months after Blackrock CEO Larry Fink said on CNBC that “we have a risk of a melt-up… Despite where the markets are in equities, we have not seen money being put to work,” Barclays went so far as to make Fink’s prediction its base case, and last Wednesday the bank’s equity strategist Maneesh Deshpande said that a market melt-up scenario was now his “base case”, explaining that “after the truce in the U.S.-China Trade War post the G20 meeting in Osaka, the “melt-up” scenario we had outlined previously is now our highest probability outcome, leading us to update our 2019 S&P 500 price target to 3000.“

In retrospect, both Barclays and Larry were right, and while there was some trepidation last week whether the bad news is good news scenario would persist indefinitely, with the S&P closing above 3,000 there is no more doubt – stocks will continue melting up well into the next recession, if not depression, as it means that Fed will have no choice but to monetize the stock market in the not too distant future until eventually central banks achieve the hyperinflation across all assets they have been seeking for so long.

Which prompted us to revisit the considerations laid out in the Barclays report: after all, if the bank was right about the meltup, what else would it be correct about. Here were the highlights:

Indeed, as Powell’s congressional testimony and FOMC minutes confirmed, no matter how strong last week’s payrolls report, or this week’s hot CPI and PPI, the market is convinced – there is no data that can change the fed’s mind to cut rates in three weeks.

For those worried that Powell may pull the rug from under the market on July 31, Barclays has that base covered too, noting that “since 1994, outside the intra-meeting “emergency” cuts, the Fed has rarely surprised the market.” … “As a result, unless the Fed fund futures react significantly due to significantly better macroeconomic data over the next few weeks, the Fed is unlikely to not ease at all.” And since the market now realizes it is in control of monetary policy, there is no reason at all to move the Fed Funds, which can predict a rate cut indefinitely, oblivious of what the economic data indicates, especially with the Fed now “symmetric” on inflation overshoots, and willing to let the economy run hot.

So what does Barclays expect once the Fed does cut? 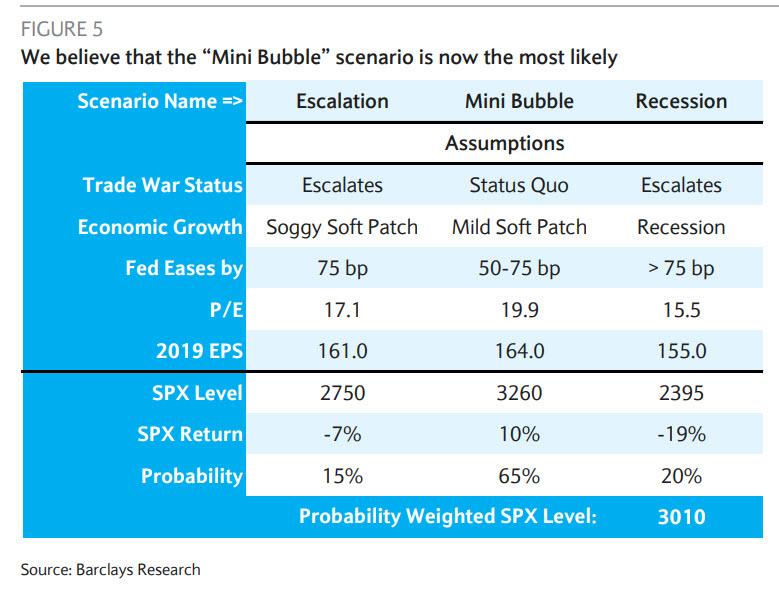 So far, Barclays’ base case is spot on even though Larry Fink’s “Money being put to work” is still not here, and in fact continues to be most allocated to bonds. According to the latest EPFR numbers compiled by BofA, this week we saw $9.6bn into bonds, $0.6bn into equities (with small $1.7BN inflows to the US offset by outflows from Japan, Europe and Emerging Market), while bonds continue to have all the fun, with a 27th week of inflows, amounting to $9.6 billion, and a total of $242BN YTD into bonds, with some $150BN pulled out of equities, with BofA’s Michael Hartnett pointing out that “Wednesday flows following dovish Humphrey-Hawkins testimony showed investors selling equities and buying IG, HY, and govt bonds.”

In other words, no matter what happens to the market, investors have and will continue to dump stocks and buy bonds… and yet somehow the S&P continues to levitate ever higher. All we have to say to this is that corporate buybacks and that dealer “gamma trap” is certainly pure magic when it comes to stock market levitation (and explains why despite the record S&P highs, the year’s biggest IPO was pulled today due to lack of investor demand).

So what happens next?

We being with a question: if the Fed was wrong in 2018 about the economy overheating, is the inverse just as likely now, and could Powell be forced to once again make a dramatic U-turn in a short few months, and not only stop the rate cuts but commence hiking rates? While the answer is unclear, BofA’s Hartnett is quick to point out that the worst in the economy may already be behind us: BofA’s Global EPS model predicts -4.6% EPS growth in the next 12-months (it has been predicting EPS recession since Jan’19) and even consensus predicts -0.4%. 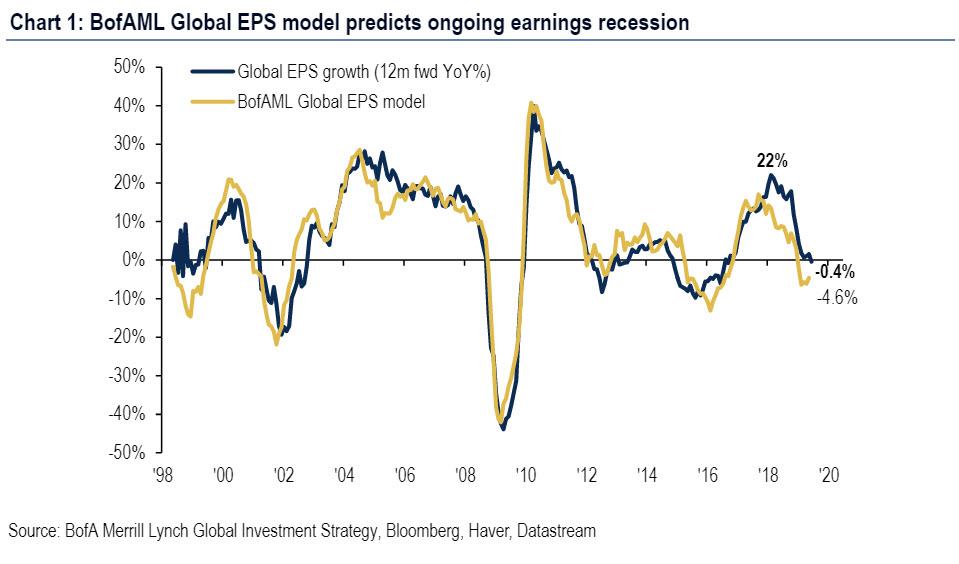 So what does all that mean for stocks for the remainder of 2019? Here is Hartnett’s conclusion:

“we stay contrarian bullish on risk assets, anticipate an “overshoot” in credit & equity prices in coming months, followed by an overshoot in gold (US$ devaluation) before big H2 top in asset prices, as bond bubble pops & policy impotence visible.”

In short, one last hurrah as the Fed creates what may be the final melt up, followed by a “big” top in stocks in the second half, as the bond bubble and Fed credibility bubbles both pop.