The Death Of The Homebuyer Bidding-War

The U.S. homebuyer market has cooled off so quickly that buyers are now four times less likely to face a bidding war than 12 months ago, according to Bloomberg.

12% of buyers in June faced competitive bids compared to 52% a year prior. San Francisco remains the country’s most competitive market, but the share of listings in the city that received multiple bids fell from 65% to 28%. Sales of homes began falling toward the end of last year after rising rates cooled purchases for many would-be buyers, especially in coastal markets where priced had already soared.

And despite borrowing costs falling again, the recovery has been “slow to kick in”. 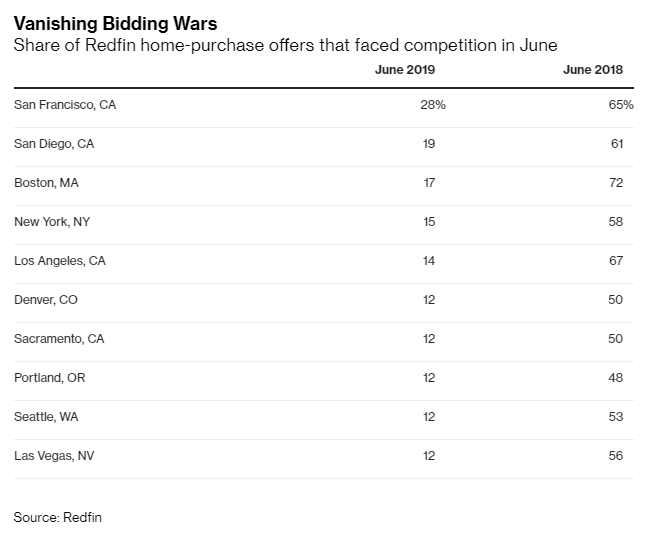 If this is the environment after an unprecedented decade of low rates, imagine what’s going to happen when they tick up more than a couple of basis points?

San Jose has been the hardest hit. Only 6% of of offers faced competition in June, which is half the national rate. This number fell from 74% one year prior.

Redfin agent Stella Phua said: “Properties in the area are staying on the market longer, and more sellers dropping prices than either of the last two years. The only homes that are getting multiple offers now are the ones in the best locations, great condition, and priced lower than similar homes in the neighborhood.”