A Bearish Morgan Stanley Doubles Down: Why The Bank Sees The S&P Falling Back Under 3000

Breaking Out Is Hard To Do

For the past 18 months our call on US equities has been very consistent. After a massive bull run from April 2013 to January 2018, we suggested the US equity market was about to enter a multi-year consolidation during which the S&P 500 would trade in a wide range between 2400-3000. Since then, that range has defined the price action well with the lows in December coming in around 2350 and several attempts at 3000 on the upside that ultimately failed. We now find ourselves at the upper end of that resistance level once again, as shown in Exhibit 1. Just like in January and September last year, there appears to be growing excitement about the possibility of a break out above 3000. 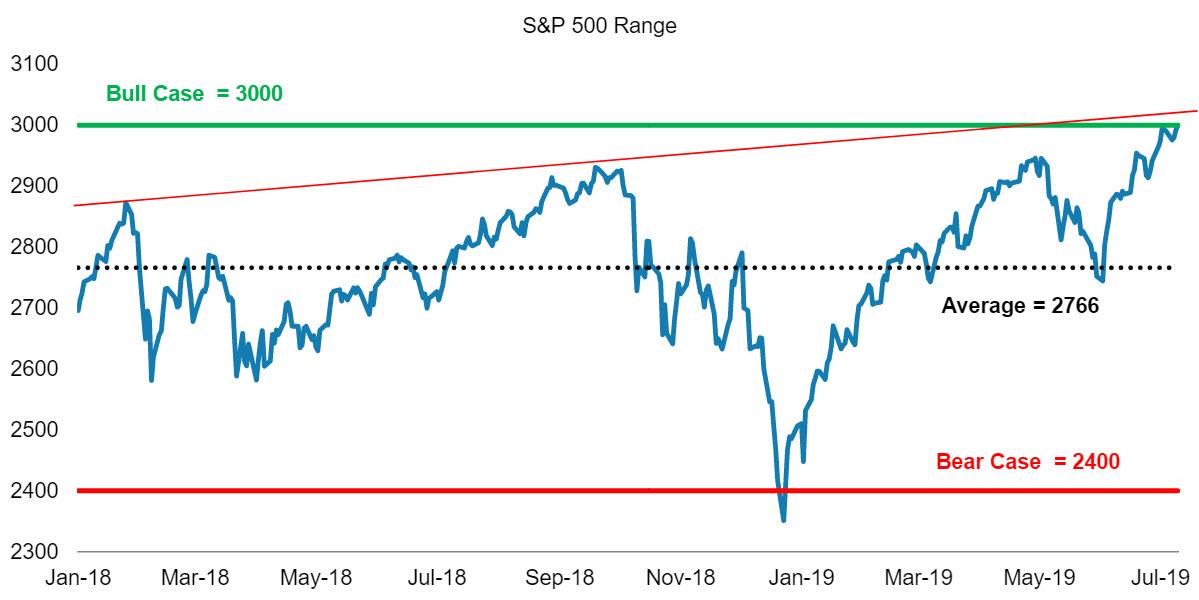 Each successive attempt to break out over the past 18 months has been for different reasons.

In January 2018, it was about the tax cuts and the extremely positive impact that had on earnings revisions for 2019 and beyond. We argued at the time that the market had already discounted these ensuing revisions back in December, with the highest P/E multiple and lowest equity risk premium on the S&P 500 witnessed since the late 1990s. Indeed, the equity market promptly rejected that first attempt at 3000 with the most dramatic jump in equity volatility since the global recession in 2015.

After a grinding recovery during the spring and summer with a distinctly more defensive leadership, the S&P 500 tried to break out above 3000 once again in September. That time, we warned that higher real interest rates might prove to be the kryptonite for this bull to break out above our pre-determined range. Sure enough, during 4Q, it was the expensive high-multiple growth stocks that took it on the chin, proving once again that valuation does matter, even if the fundamentals are strong.

Of course, interest rates have fallen a long way since then, something our rates strategy team forecasted last fall. While this decline in interest rates has made US stocks more attractive on valuation, the fundamentals are no longer strong. Therefore, despite the marginal break above 3000 this past week, we expect another failure near the sloping red line in Exhibit 1 that connects the two prior highs last year.

The catalyst this time will be the disappointment from growth slowing further toward outright negative numbers on a year-on-year basis, in earnings and maybe even the economy. From our lens, the incoming data clearly show that growth has slowed much more than what the consensus expected this year, yet forecasts remain optimistic for a resurgence in the second half and into 2020.

We remain of the view that the consensus S&P 500 earnings forecasts are still materially too high for both the second half of 2019 and 2020 and that the Fed’s recent signaling of a cut later this month should not be celebrated if it is accompanied by an earnings, and possibly an economic recession in the US.

History is clear on this one. If this is the beginning of a full-blown rate-cutting cycle by the Fed in an attempt to ward off a recession à la 1990, 2001 or 2008, stocks typically don’t do well after the first cut. On the other hand, if the cut is not associated with a further slowdown, but a reacceleration or stabilization in growth, then equity markets have a chance to move higher and finally break above 3000 on a sustained basis.

The consensus appears to be in the latter camp and we remain in the former. This isn’t the first time we’ve been out of consensus over the past year as we approached these levels. The first two times our skepticism proved to be right. We’ll soon find out if breaking out is still hard to do. Have a great Sunday.