How Much Higher Can Stocks Rise: JPMorgan Answers

Having flirted with breaking above 3,000, the S&P finally rose above the key psychological barrier last week, and seems poised to keep rising thanks to the Fed’s signaling of unconditional rate cuts, as equity markets continue to price in a repeat of the 1995/1998 insurance-rate-cuts scenario with even greater confidence (although as noted earlier, Morgan Stanley steadfastly believes markets are wrong for the third time). However, with the prevailing narrative now that of “insurance” cuts, this – as JPM’s Nikolas Panigirtzoglou writes – also assumes that central banks follow the script of 1995/1998 and at the minimum validate market expectations.

What if these assumptions are wrong?

The answer to that question ties in with the question posed by Panigirtzoglou in his latest Flows and Liquidity weekly, which seeks to answer “how much equity upside should we expect in this bullish scenario where the Fed cuts its policy rate by 75bp this year to provide insurance against downside risks similar to what happened in 1995/1998?“

As JPM reminds us, on both prior “insurance” cut occasions, the Fed had over-delivered both in terms of the speed and magnitude of rate cuts, to wit:

In its attempt to answer the key question, and its assessment of what the remaining “potential equity market upside” from here is, JPM opts to focus on an alternative methodology based on position metrics, instead of historical comparisons to 1995/1998 or valuation-related methodologies. In particular, Panigirtzoglou resorts to his previous analysis on cash, bond and equity allocations of non-bank investors globally, in which he compares global M2 with the equities and bonds held by non-bank investors.

Why is global M2 important? Because it reflects the cash balance of non-bank investors, such as households, corporations, pension funds, insurance companies and SWFs. This distinction is important because more than half of fixed income securities are held by central banks, including FX reserve manager, and commercial banks.

According to JPM’s calculations, and by excluding banks – entities that typically invest in bonds rather than equities – the amount of bonds held by the rest of the world, i.e. non-bank entities, is around $32tr. This compares to $55tr of cash and $67.5tr of equities based on DataStream’s global equity index universe. That means that non-bank investors, which invest in both bonds and equities globally, have an implied allocation to bonds of 20.8% currently. This 20.8% bond allocation is above the post Lehman historical average and well above the 19% low seen in September last year. In other words the past months’ bond rally has more than unwound the large bond underweight that had emerged in September last year.

Meanwhile, the mirror image of this unwinding of the previous bond underweight is that the current equity overweight is smaller from that seen in September last year, which at 45.5% represented a post-Lehman high at the time. So, despite equity markets making new highs, investors are not as OW in equities as they were last September simply because bond markets rallied strongly in recent months making them less UW in bonds. Effectively, the past months’ bond rally has been boosting equities by creating more room for investors to increase their equity allocations, something we discussed in parsing the potential for a pension fund driven meltup at the end of last quarter.

This is shown in the chart below which shows that investors globally have an allocation to equities of 43.6% currently, which is somewhere in between the post-Lehman high of 45.5% seen last September and the recent low of 41.8% seen last December. 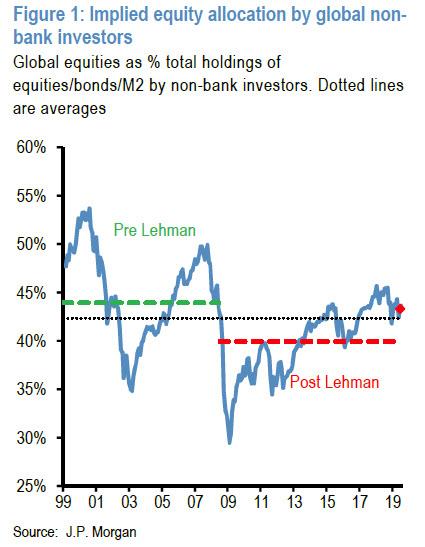 As the JPM strategist notes, it is important to emphasize that relative to longer term history, this 43.6% represents an overweight equity allocation as it is not only above both the 40% post-Lehman average and the 43% longe-rterm historical average.

It is worth noting that in JPM’s opinion the post-Lehman historical averages are likely more relevant in terms of gauging the magnitude of OWs or UWs, for the following reason:

It is true that in previous cycles the trough in bond allocations has been lower than current levels, and the peak in equity allocations higher. While allocations could theoretically approach their previous cyclical extremes, we would make two observations on why these previous levels are less likely to be achieved.

With this in mind, Panigirtzoglou writes that “one simple way of thinking about the upside for equities from here is to calculate the rise in equity prices needed for investor to become as OW in equities as they were last September.”

As such, and according to JPM’s calculations, global equities would need to rise by 7.9% from here, all else equal, to make investors as OW in equities as last September. In other words, assuming no change in bond valuations from here, any upside for equities should be limited to high single digits.

And while a bearish Morgan Stanley would be puking blood at this point, the JPM strategist – traditionally the most bearish of his bank’s peers – is similarly skeptical that such a spike is possible, and notes that “this equity upside is facing challenges”, of which the following two stand out:

One challenge is a bond selloff. This could emerge as a result of an overhang of long duration positions combined with a rise in bond volatility, a decline in bond liquidity and strong bond supply, “all of which create significant risk of a bond market correction going forward.”

Another challenge is the Fed under-delivering. The above technical factors are not the only potential cause of a bond market correction, which could also happen “because central banks fail to follow the script of 1995/1998 and under deliver vs. market expectations or because economic data such as manufacturing PMIs start recovering over the coming months.” Yes, the risk to stocks is that the economy, gasp, recovers.

Of course, as Q4 of 2018 demonstrated all too vividly, whatever the trigger, any bond selloff would be problematic for equities, and at the minimum it would mechanically in this simple framework reduce the 7.9% upside estimated above. Specifically, a reversal of the bond rally since May would reduce this estimated 7.9% upside from 7.9% to 5.2%.

One final point made by Panigirtzoglou is to debunk the widely popular, if also widely inaccurate, argument that “bears are everywhere”, which the bulls use as a contrarian indicator to argue for a continued equity melt up.

Well, as with most widely accepted conventions, this one, too, is wrong, and the JPMorgan strategist finds little support for the idea that there are prevalent equity underweights and “bears everywhere”. First, as shown above, investors globally are overweight equities especially compared with the post-Lehman period.

Second, the June performance by hedge funds and other institutional investors points to above average rather than below average equity positions. This is shown in the next chart which depicts the performance of various types of investors against benchmarks. Equity Long/Short hedge funds which represents the most important equity hedge fund universe produced a return of 3.2% in June according to HFR and 9.5% in H1, with the two largest L/S sub-categories (accounting for more than half of total L/S hedge fund AUM) fundamental growth and fundamental value returning 3.9% and 3.5% in June, respectively. This implies a beta at or higher than 0.5, which is the historical average relative to the MSCI AC World index. 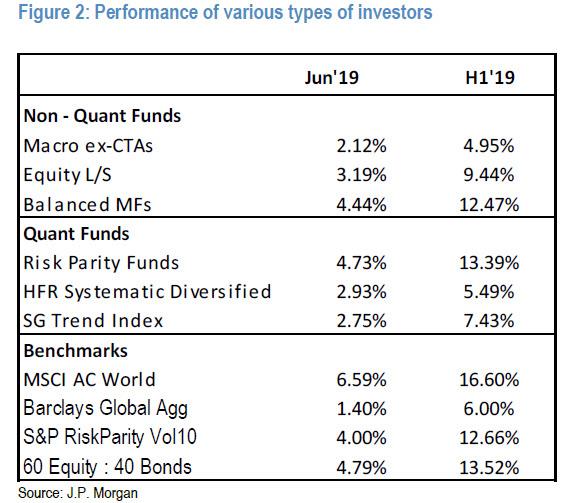 What this means, said simply, is that Equity Long/Short hedge funds would struggle to produce such returns if they were underweight equities.

Other investor classes, as also discussed earlier, had notably higher market betas: risk parity funds produced a return of 4.7% in June and 13.4% in H1 beating their benchmark. And CTAs produced a very strong return in June likely benefiting from long positions in both equities and bonds. This is consistent with JPM’s trend-following framework which suggests that CTAs are currently pretty long in both bond and equity futures. It is also consistent with the new highs seen in the spec positions of US equity futures by asset managers and leveraged funds (Chart below). 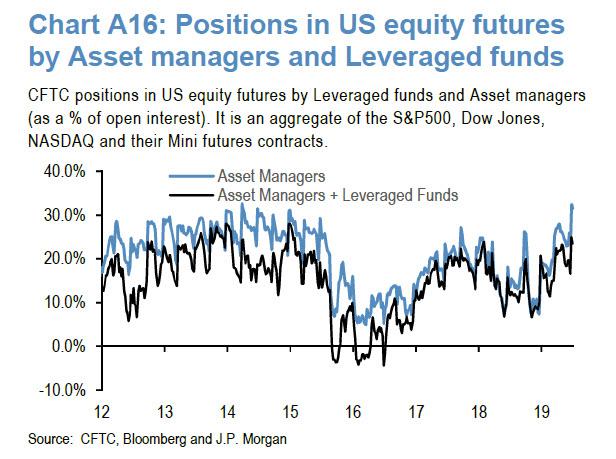 Notably, these equity futures positions are even higher than last September, which to JPM is evidence suggesting little support for the  “Bears everywhere” thesis.

In summary, Panigirtzglou concludes that his position-based analysis “points to limited upside for equities from here even if the 1995/1998 insurance-rate-cuts scenario plays out over the coming months” and, worse, “any equity upside would become even more limited if bond markets fail to sustain their H1 gains.”