According to the latest IIF Global Debt Monitor released today, debt around the globe hit $246 trillion in Q1 2019, rising by $3 trillion in the quarter, and outpacing the rate of growth of the global economy as total debt/GDP rose to 320%

This was the second-highest dollar number on record after the first three months of 2018, though debt was higher in 2016 and 2017 as a share of world GDP. Total debt was broken down as follows:

And while the developed world has some more to go before regaining the prior all time leverage high, with borrowing led by the U.S. federal government and by global non-financial business, total debt in emerging markets hit a new all time high, thanks almost entirely to China… 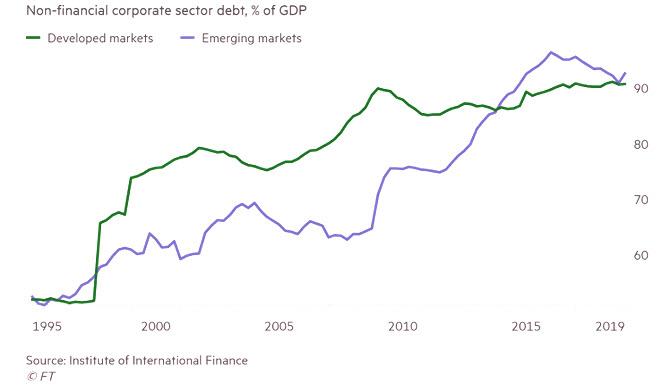 … which has been on such a debt issuance rampage, it would make even Uncle Sam blush, as Chinese corporations owed the equivalent of more than 155% of GDP in March, or nearly $21 trillion, up from about 100% of GDP, or $5 trillion, two decades ago.

And here is a startling fact: according to Fundamental Intelligence, a bond market consultancy, Chinese firms accounted for 42% of all corporate bonds issued in EMs this year, which it warned raised the risk of defaults next year and in 2021.

As a result of China’s ravenous debt appetite, emerging economies had the highest-ever level of debt (both corporate and household) at the end of Q1, both in dollar terms and as a share of their gross domestic product, according to the FT’s report  on the latest IIF data. 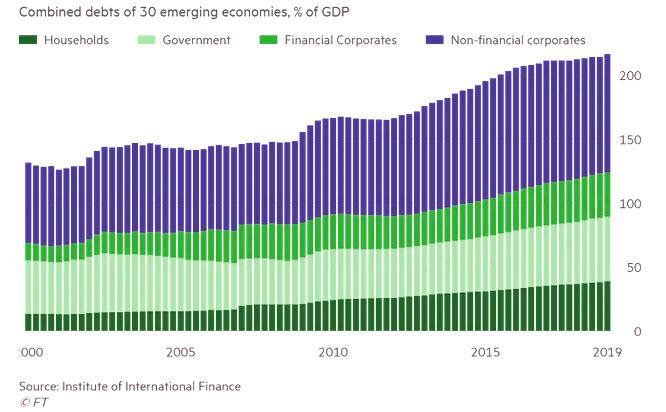 The IIF pointed out the obvious, namely that lower borrowing costs thanks to central banks’ monetary easing had encouraged countries to take on new debt. Amusingly, by doing so, this makes rising rates even more impossible as the world’s can barely support 100% debt of GDP, let alone 3x that.

Sure enough, as Sonja Gibbs the IIF’s managing director for global policy initiatives, said “It’s almost Pavlovian. Rates go down and borrowing goes up. Once they are built up, debts are hard to pay down without diverting funds from other goals, whether that’s productive investment by companies or government spending.”

And that, in a nutshell, is why the world is doomed to a central-bank created boom-bust cycle, as once there is just too much debt, there will either by hyperinflation or a wave of global sovereign and corporate defaults.

Breaking down the debt increase, the combined debts of 30 large Developing Economies rose to 216.4% of GDP in March, from 212.4% a year earlier, sending it to $69.1 trillion in dollar terms, with Gibbs noting that much of the risk in EM debt was concentrated in the corporate sector (mostly that of China), where debts were equal to 92.6% of GDP in March — higher than the comparable figure for the non-financial corporate sector in developed markets, according to the IIF. 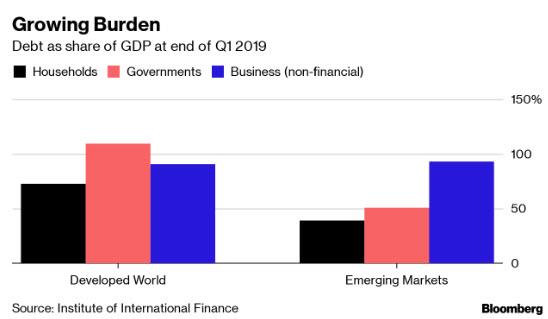 And while corporate debt in the developed world has kept pace with GDP growth in the past two decades, in EMs it has risen almost 50%.

“There has been so much unfettered access to capital markets that it has changed the landscape over the past decade,” Ms Gibbs said. “Not just on the corporate side but in terms of the contingent liabilities on governments.”

“This is not a group of borrowers with long experience of managing debt over economic cycles. Once you get into a downturn, a lot of firms have a lot of debts that they will have difficulty in paying.”

Another risk: in emerging markets, the IIF said that business is increasingly relying on short-term borrowing which “leaves some highly indebted firms more exposed to swings in global risk appetite.”

And something else to keep in mind, in prior debt cycles China never allowed full-blown corporate bankruptcy and debt restructuring, as insolvent companies were either bailed out or nationalized. Which means that once the downturn comes, China will be facing a tsunami of defaults the likes of which it has literally never experienced before.

As for developed countries, the debt auto pilot here is fully engaged: total debt increased by $1.6 trillion in the quarter to $177 trillion. That includes $69 trillion in the U.S., where government borrowing has been on the rise; in other news just the total US debt is now the same as the debt across all the emerging markets.