Back in June, following the April downgrade in the Fed ‘s  assessment of the US economy, the Fed’s Beige Book signaled a “slight improvement” in the economy, describing economic activity expanding at a “modest pace overall” from April through mid-May, and dropping the “slight” classifier.

Now, one month later, the economy appears to be expanding on its recent recovery as economic activity “continued to expand at a modest pace overall” from mid-May through early July, with little change from the prior reporting period, according to the latest, just released Beige Book.

Among the various indicators suggesting a solid, stable, expanding economy, the Beige Book notes that:

So with all those things going for the US economy, the Fed is surely set to keep hiking right? Why of course not – after all the S&P may just suffer a shocking 0.1% drop one day in the not too distant future. To prevent that, ideally in perpetuity, as even the shoeshine boy knows by now the big debate on July 31 is whether the Fed cuts 25 bps or 50bps. And that’s in a time when literally nothing is broken with the economy; one can’t wait to see just how negative the Fed will push rates if and when the US economy does finally slide into contraction.

Or perhaps the summary assessment provided by the report’s authors was a little on the overly rosy side, because a quick summary of the number of instances of “tariff” and “slow” saw a remarkable increase relative to the June beige book, which surged from 37 to 49 and from 26 to 58, respectively. 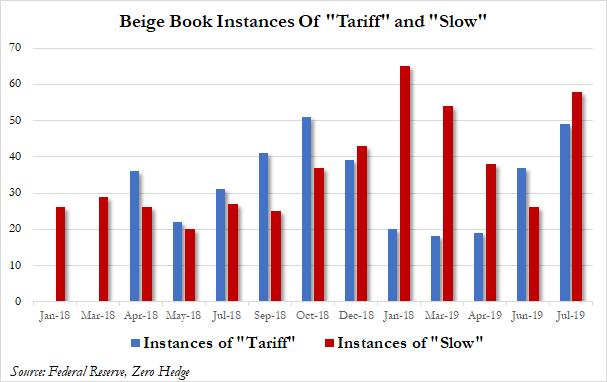 Meanwhile, as Reuters’ Jeoff Hall points out, the root word “strong” appeared 34 times in today’s Beige Book, down from 58 in the June 5 version. But incidence of the word “weak” fell to 17 today from 25 six weeks ago. IFR Markets Beige Book Diffusion Index now stands at -44.0, a 4.5-point deterioration from previous. 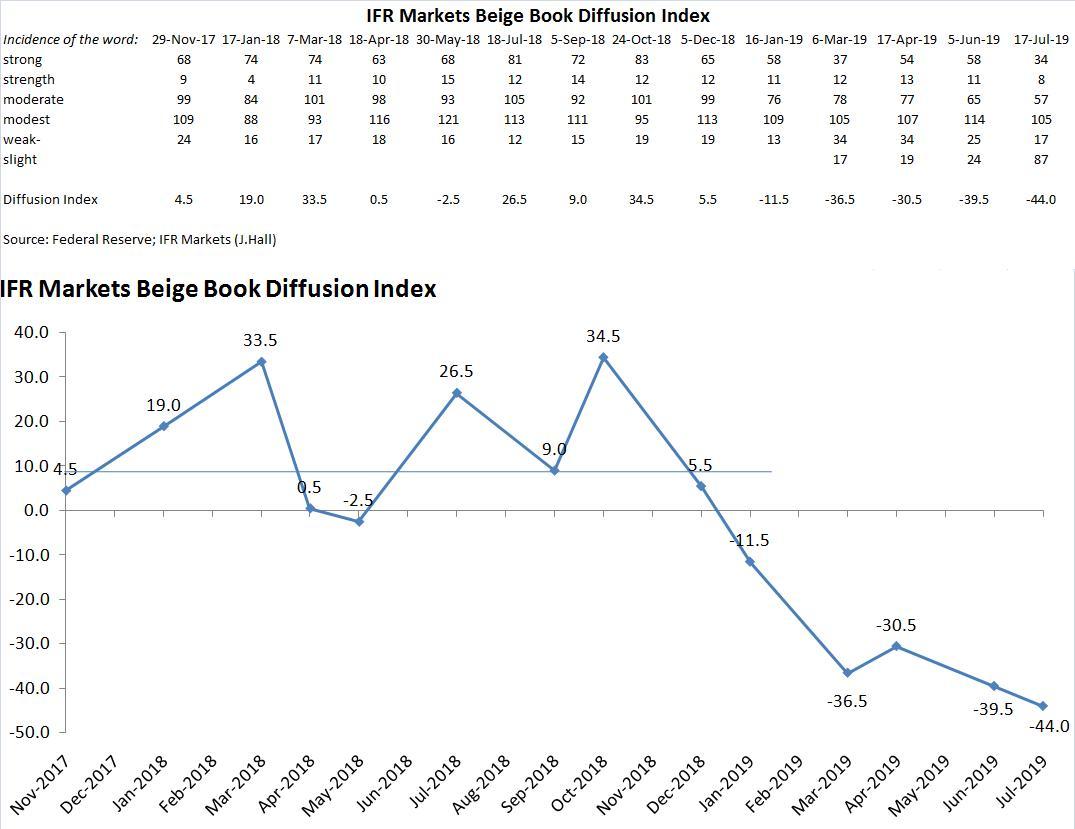 Whatever the answer, it doesn’t matter – as the Fed has demonstrated, it is only “data dependent” when the data is moving in the pre-determined direction that justifies the Fed’s existing policy thinking. As such, all positive economic news will be summarily ignored until the fed funds rate is somewhere in the mid-1% range, and/or Trump stops tweeting @ Jerome Powell.

Finally, and as always most entertaining, here are the most amusing economic anecdotes compiled from the various regional feds.