After two days of grilling by US politicians (including demands for a moratorium and fearmongering of the end of banking and the ease of funding terrorism) and endless byelines supporting and denigrating Facebook’s new digital currency concept, Libra, one would suspect that it is Americans that should be most interested in Zuckerberg’s latest idea for world domination.

That would be wrong.

Perhaps not entirely surprising, it is in fact the Chinese, based on global search volumes, that are the most interested in Libra. 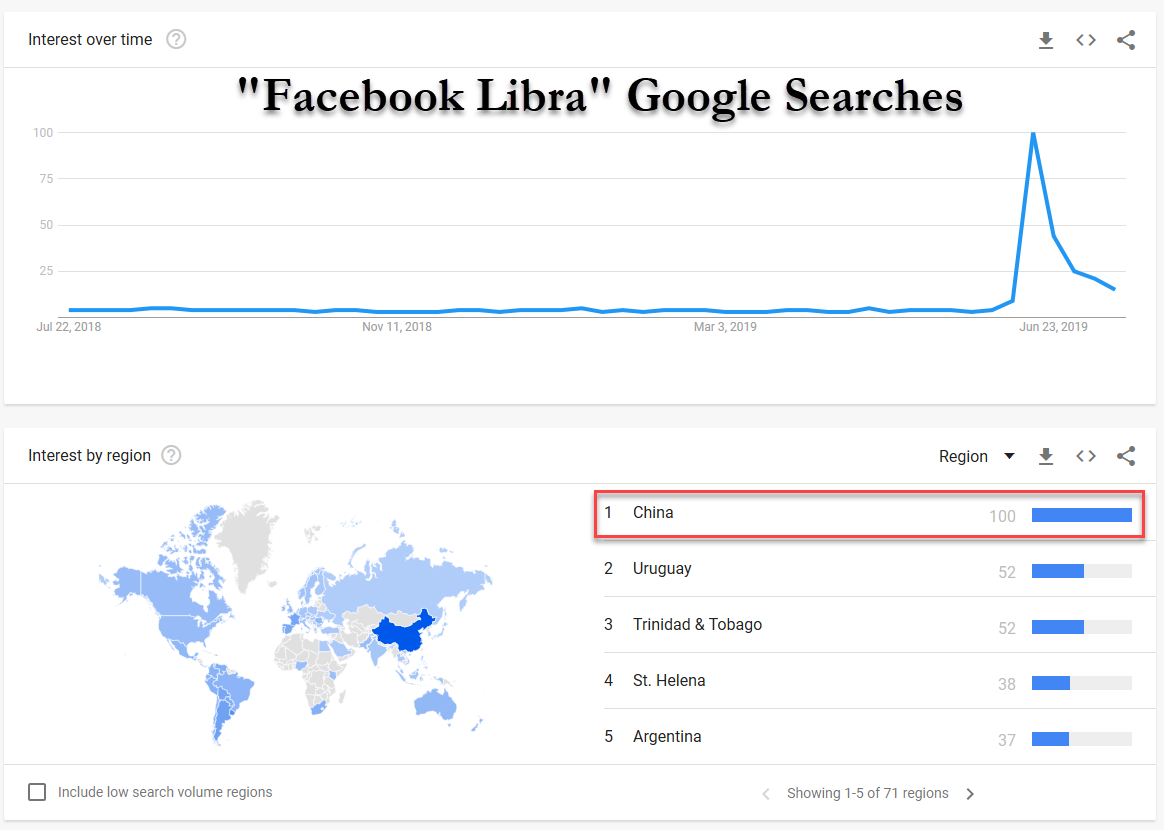 This is ironic since, as we noted in 2015, it was soft capital controls by Chinese authorities that sparked the big run-up in cryptocurrencies as an alternate store of wealth (to avoid government interference).

Are the Chinese once again worried that as economic growth slumps and debt-driven gains evaporate that Chinese authorities will crackdown harder on capital’s exodus from the trade-war-turmoiling nation?

Judging by the questions from US politicians, Libra is the most dangerous ‘thing’ in the world (and perhaps its apparent appeal to the Chinese confirms that). Of course, China will never ‘allow’ this to move forward but as CoinTelegraph’s Aaron Wood details below, Facebook’s David Marcus, the CEO of the Calibra wallet service for the social media giant’s forthcoming Libra stablecoin, at least attempted to assuage US regulators’ concerns regarding the project and educate lawmakers on its purpose and potential.

Cointelegraph has compiled some key quotes from the hearing, which you can view here.

[5:40] Rep. Patrick McHenry: ”We’re here to go beyond the headlines… Washington must go beyond the hype to ensure that we are not the place where innovation goes to die.”

[13:49] David Marcus: “That’s what Libra is about: developing a safe, secure and low-cost way for people to send money around the world.”

[27:] McHenry: “Why are you doing this in Switzerland and why are you using a basket of currencies? Why not the good old American dollar”

Marcus: “…The choice of Switzerland has nothing to do about evading responsibilities or oversight. The goal of Switzerland is to home this Libra in an international place…”

[0:40:10] Rep. Nydia Velasquez: “Will you commit yourself to not launch before all the concerns from the Federal Reserve and all the regulators are addressed?”

Marcus: “Absolutely Congresswoman and I want to reiterate this commitment that this was the spirit in which we announced early…”

[1:01:51] Rep. David Scott: “Neither your white paper nor your subsequent Facebook post offered any concrete details as to how you plan to implement or enforce strong Anti-Money Laundering, how you plan to enforce Know Your Customer protections, and most importantly, to ensure — and that’s what all of us are concerned about — the safety of our financial system.[…] what do you see as the responsibilities of Libra to combat money laundering, to protect our financial system?”

Marcus: “[Libra] will have an AML program and will have guidelines for all the members to enforce the AML, KYC, CFT standards. […] Blockchain gives additional information to law enforcement and regulators compared to our current system.”

Scott: “What are you anticipating as some of the new ways that criminals may attempt to export and exploit Libra for illicit use and how are you combating [this]?”

Marcus: “I couldn’t agree more with you Congressman, and I believe that we can improve on the current system because we have a chance this time around to think through how the network is designed, the way that the on and off ramps are properly regulated with proper KYC controls, the proper way to monitor new activity and report it with new technologies and I think this system might be potentially better on these fronts.”

Marcus: “Anyone that can open an account, goes through KYC, in countries where we can operate.”

Duffy: “Who can use a $20 bill? […] This $20 bill doesn’t discriminate on anything you can be a murderer say horrible things, you can say great things. This $20 bill can be used by every single person that possesses it. With regard to your network, can Milos Yianopolous and Louis Farrakhan use Libra?” [both have been banned from FB]

Marcus: “I don’t know yet, congressman.”

[1:33:00] Rep. Brad Sherman: “We need to get Mr. Zuckerberg here. This is the biggest thing or this tries to biggest thing this committee will deal with this decade […] Now we’re told by some that innovation is always good, the most innovative thing that happened this century is when Osama bin Laden came up with the idea of flying two airplanes into the twin towers. That’s the most consequential innovation, although this will do more to endanger America than even that […] If cryptocurrency is used to finance the next horrific terrorist attack, 100 lawyers standing in a row, charging $200,000 an hour, are not going to protect his [Zuckerber’s] rear end from the wrath of the American people.”

[2:37:00] Rep. Ayanna Pressley: “It is long past time that we stop compromising consumers’ privacy in pursuit of profit. […] Would you trust your money with a company who essential admits it’s just winging it?”

[2:50:00] Rep. Alexandria Ocasio-Cortez: “I believe we’re here today because Facebook, which is a publishing platform, an advertising network, a surveillance corporation, a content distributor now always wants to establish a currency and act through its wallet as at minimum a payment processor. Why should these activities be consolidated under one corporation?”

Marcus: “The one thing we are focused on is solving problems for the very people who are left behind right now and we believe it’s important because we have the ability to invest and the products to deliver those services that will solve problems.”

For now we will have to wait to see if the Chinese people’s initial interest turns into actual capital exodus, and/or how quickly Chinese authorities will ban/block/censor any such action.