60% Of US Equity Assets Are Already Parked In Passive Vehicles, Quants Control Another 20%

BlackRock, Inc. (BLK on the NYSE) reported second quarter results this morning, continuing the financial behemoth’s impressive asset collection. Fixed income inflows were characterized as “blockbuster” by Bloomberg, jumping to $110 billion from $26.4 billion year-over-year.  That pushed total inflows to a record $151 billion and assets under management to $6.8 trillion from $6.3 trillion a year ago. Although revenues of $3.5 billion and net income of $1 billion represented year-over-year declines of 2% and 7%, respectively, BLK shares finished little changed and sit higher by 21% year-to-date. Since a bearish analysis in the Sept. 30, 2016 edition of Grant’s, BLK is up 31%, compared to 37% for the S&P 500.

Needless to say, the breakneck growth in indexation and ETF have been a boon to New York-based BlackRock, the world’s largest asset manager. The problem: How much is left to conquer? According to a June 28 research note from J.P. Morgan strategist Dubravko Lakos-Bujas, 60% of U.S. equity assets are already parked in passive management vehicles, with quantitative funds controlling another 20%.

But as demonstrated by the contraction in revenues and earnings despite AUM growth, fee compression looms large, as BlackRock’s operating margin slipped to 36.3% from 39.9% a year ago. Kyle Sanders, analyst at Edward Jones, commented: “The fee rate continues to tick down and that’s something that they’re going to have to outrun. You just have to grow faster, and for the most part they’re able to do that.” Kevin Duffy, principal at Bearing Asset Management and longtime BlackRock bear, points out the erosion in iShares’ profitability in the following chart: 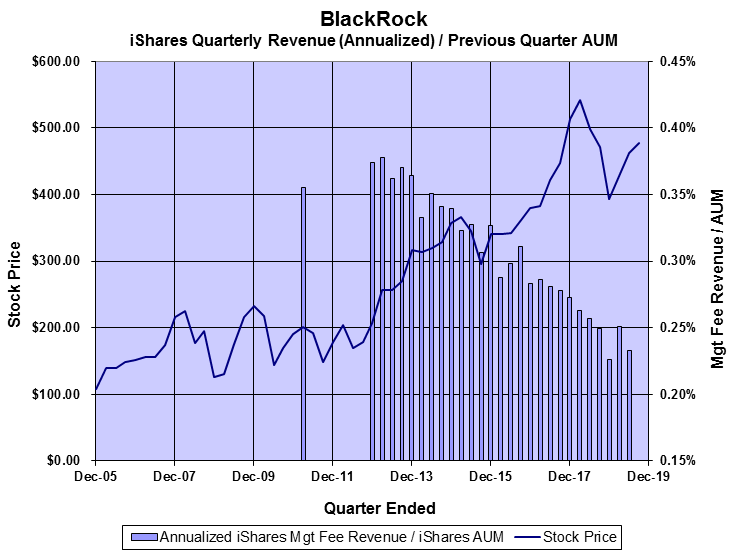 Management commentary likewise suggests that compression is a sore subject. On June 13, managing director and head of Latin America Armando Senra told the press that BlackRock is fighting the low-cost migration: “There’s too much emphasis purely on cost. We don’t talk enough about quality. That’s not to say we’re not going to be competitive – we have to be competitive, this is a competitive industry – but I would move away from just a low-cost conversation.”

BLK’s cost conversation is indeed taking place at a whisper. On April 8, Bloomberg reported that the company cut fees on its corporate bond ETF. “But rather than shout about the move, the discount was announced without fanfare – in a footnote on page 94 of a revised filing last month.”

How might BlackRock weather a bear market alongside ongoing fee compression? Just under 65% of the company’s total assets under management are invested in index funds or iShares ETFs. At the same time, base management fees accounted for 84% of BLK revenues for the first six months of the year. An interruption to the ongoing asset price levitation would spell trouble for BLK.

As for his reaction to that yet-unseen day, CEO Larry Fink may have provided a preview this morning. Appearing on CNBC, the BlackRock boss called for the European Central Bank to further ramp its policy accommodation: “If the ECB is really going to try to re-stimulate the economy in Europe, they are going to have to buy equities.”