US May Have Shot Down Its Own Drone, Iran Claims

Iran has issued a surprising contradiction to the official US account of Thursday’s drone downing. President Trump had announced that the amphibious assault ship, the USS Boxer, shot down an Iranian drone in the Strait of Hormuz in a defensive action. The president said in a press briefing it was “immediately destroyed,” when it came within 1,000 yards of the ship according to the president, “threatening the safety of the ship and the ship’s crew.” 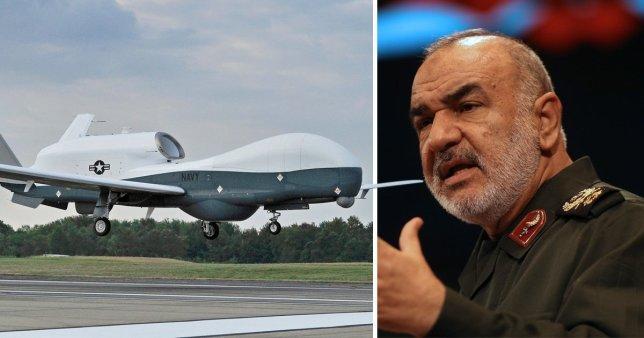 But Iran denied losing any of its drones following the perplexing statement from Iranian Foreign Minister Javad Zarif yesterday evening saying he was not be aware of any drone downing following Trump’s announcement, according to Reuters. “We have no information about losing a drone today,” Zarif had told reporters at the United Nations. Instead, Iranian officals are now suggesting the US Navy actually shot down its own drone by mistake. Iran’s Deputy Foreign Minister Abbas Araghchi said on Twitter early Friday:

“We have not lost any drone in the Strait of Hormuz nor anywhere else. I am worried that USS Boxer has shot down their own UAS (Unmanned Aerial System) by mistake!“

And Iran military spokesman, Gen. Abolfazl Shekari, was also quoted by the semi-official Tasnim news agency as saying that “all Iranian drones that are in the Persian Gulf and the Strait of Hormuz, including the one which the U.S. president mentioned, after carrying out scheduled identification and control missions, have returned to their bases.”

We have not lost any drone in the Strait of Hormuz nor anywhere else. I am worried that USS Boxer has shot down their own UAS by mistake!

According to President Trump’s account of the incident, the Iranian operators of the drone refused calls to stand down, after which it was “immediately destroyed,” when it came within 1,000 yards of the ship, “threatening the safety of the ship and the ship’s crew.”

Trump has called on “other nations to protect their ships as they go through the Strait,” also as a State Department official told Bloomberg that the elite Islamic Revolutionary Guard Corps which patrols the area has kept up “continued harassment” of vessels in and around the strait.

I want to apprise everyone of an incident in the Strait of Hormuz today, involving #USSBoxer, a U.S. Navy amphibious assault ship. The BOXER took defensive action against an Iranian drone…. pic.twitter.com/Zql6nAUGxF

Concerning the now deeply conflicting narratives over the downed drone — which Tehran is now saying was actually American, but which Washington says was clearly Iranian— the evidence is out there somewhere in the Persian Gulf, and assuming it’s recovered and presented to the world, could prove hugely embarrassing to one side or the other, most especially the White House if its claims are wrong.