In what appears to be a gesture of contempt for Washington, Chinese companies have continued to import Iranian crude, but instead of reporting the crude imports, which would violate US sanctions, they’re storing the oil in bonded storage tanks situated at Chinese ports.

The phenomenon began when Washington reimposed sanctions back in May. And two months later, Iranian crude is still being shipped to China, only to end up in the tanks. Possibly the strangest aspect of this whole arrangement is that the oil sits in the tanks, unused. So far, none of it has been cleared through Chinese customs, so the oil is still technically “in transit.”

So far, Washington hasn’t commented on how it views this stash of oil looming over global markets. If Chinese companies were to ever tap this store of oil, it could dampen demand in the world’s second-largest economy, which could rattle global markets.

The arrangement clearly benefits Iran, which has retained at least one major buyer of its crude.

“Iranian oil shipments have been flowing into Chinese bonded storage for some months now, and continue to do so despite increased scrutiny,” said Rachel Yew, an analyst at industry consultant FGE in Singapore. “We can see why the producer would want to do so, as a build-up of supplies near key buyers is clearly beneficial for a seller, especially if sanctions are eased at some point.”

Bloomberg ship-tracking data show there could be more Iranian oil headed for these massive tanks. At least ten very-large crude carriers and two smaller tankers owned by the state-run National Iranian Oil Company and its shipping arm are currently sailing toward China or idling off its coast. Combine, the vessels can carry some 20 million barrels. Most of this oil is still owned by Tehran, which creates a grey area in terms of whether China is violating US sanctions. It’s widely believed that most of the oil is payment in an oil-for-investment deal, which are fairly common in China.

The bulk of Iranian oil in China’s bonded tanks is still owned by Tehran and therefore not in breach of sanctions, according to the people. The oil hasn’t crossed Chinese customs so it is theoretically in transit. Some of the crude, though, is owned by Chinese entities that may have received it as part of oil-for-investment schemes. For example, a Chinese oil company could have helped fund a production project in Iran under an agreement to be repaid in kind. Whether this sort of transaction is in breach of sanctions isn’t clear, and so the Chinese companies are keeping it in bonded storage to avoid the official scrutiny it would get once it is registered with customs, according to the people.

Bloomberg has been tracking the discrepancy between the volume of Iranian crude shipped to China and the volume cleared by Chinese customs for months. China received about 12 million tons of Iranian crude from January through May, according to ship-tracking data, versus about 10 million that cleared customs over the period. 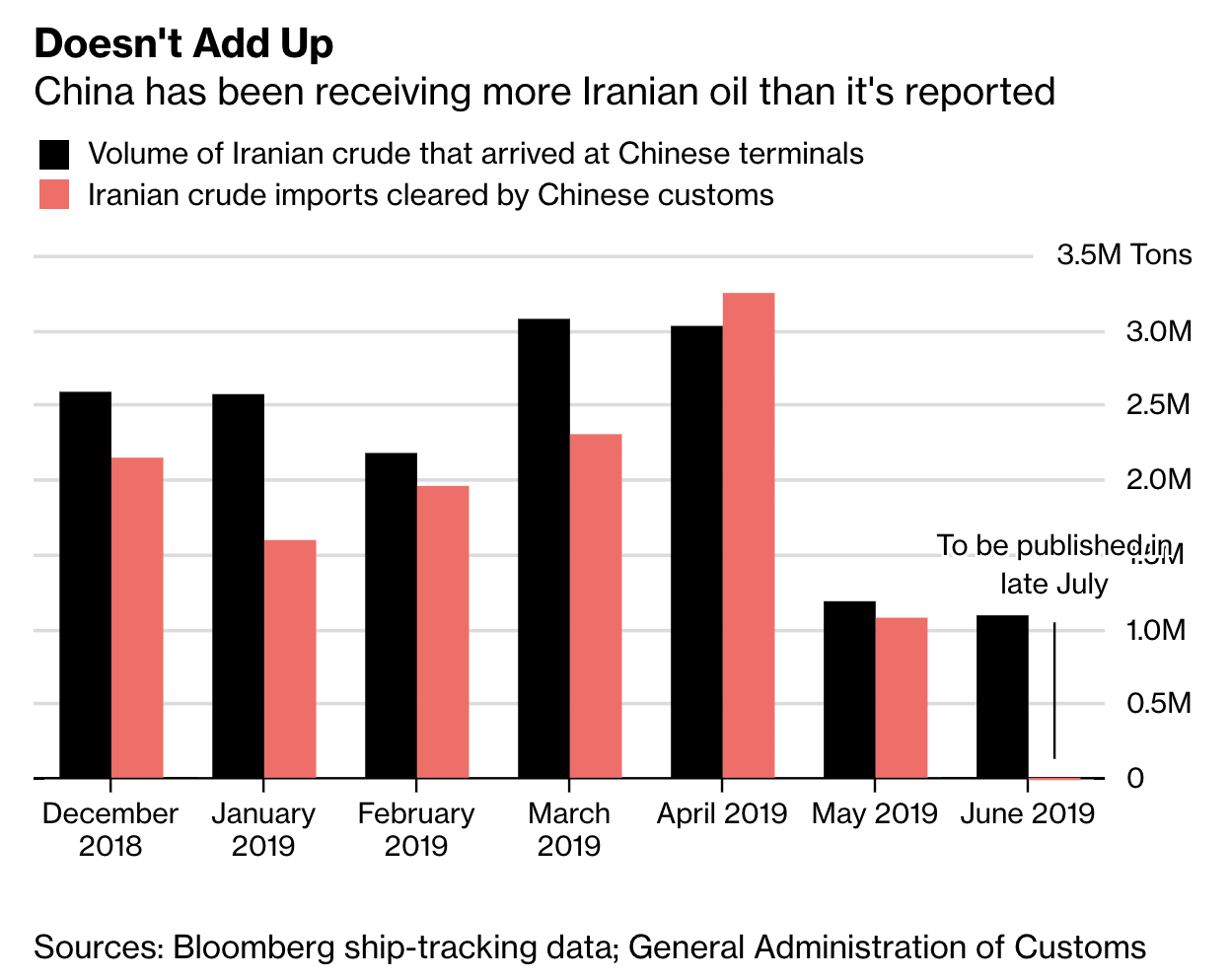 And the White House’s refusal to address the flow of Iranian crude has created confusion, Bloomberg said.

Several other Iranian-owned tankers offloaded in China or were heading there, according to ship tracking data. VLCC Stream discharged at Tianjin on June 19, while Amber, Salina and C. Infinity offloaded crude at the ports of Huangdao, Jinzhou and Ningbo. Tankers Snow, Sevin and Maria III were last seen sailing in the direction of China.

At some point, Washington will need to clarify whether this constitutes a violation of US sanctions.

“The US will now need to define how it quantifies the infringement of sanctions,” said Michal Meidan, director of the China Energy Programme at the Oxford Institute for Energy Studies. There’s a lack of clarity on whether it would look at “financial transactions or the loading and discharge of cargoes by company or entity,” she said.

Aside from providing a steady income, the arrangement will free up Iranian tankers, instead of pressing them into service as storage hubs. Then again, addressing this now might seem like Washington is deliberately picking a fight to sabotage trade talks.

Or maybe the Iranian oil will factor into a final agreement?