Why A 100bps ECB Rate Cut Would Crush European Banks 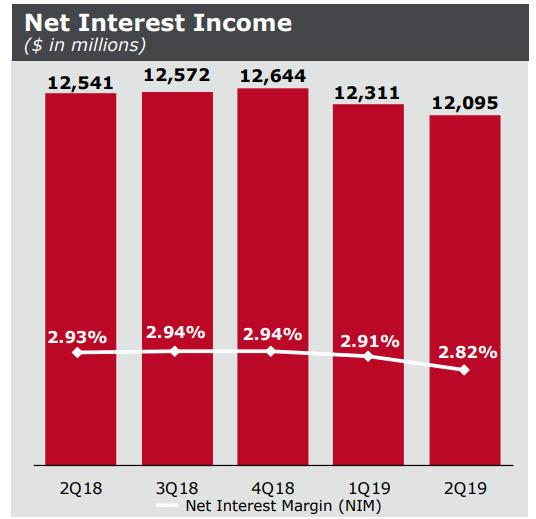 … we warned that this is an early warning of just how the upcoming Fed rate cuts will cripple US banks.

But if US banks are about to get hit, then European banks, which are already in purgatory courtesy of five years of negative rates coupled with both public and private QE, may enter the 9th circle of hell as soon as Thursday, when the ECB previews what may be a 20bps rate cut in September with or without more QE.

While the disastrous performance of European bank stocks since the financial crisis has been extensively discussed, with the European banking sector trading on the edge of support, beyond which nothing good awaits… 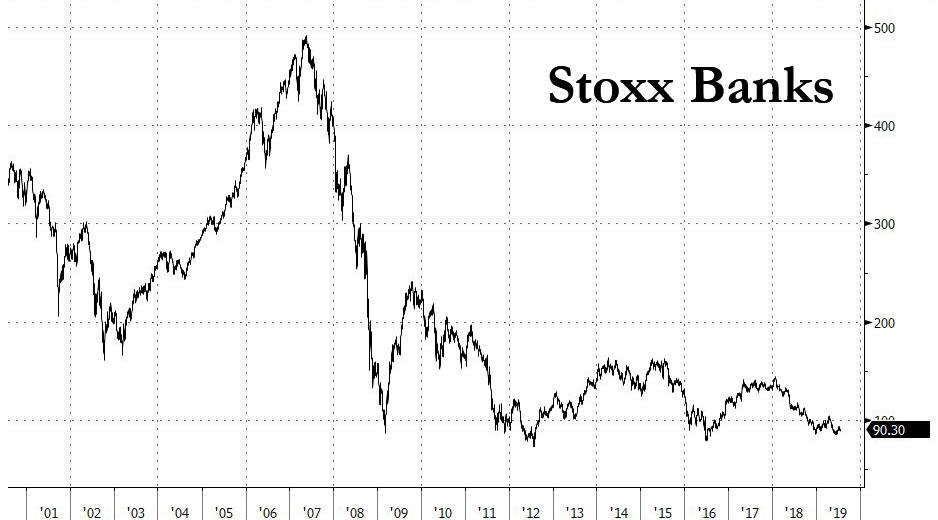 … it would be ironic if it is none other than the ECB which tips European bank stocks to new all time lows.

The reason for that is that, as Goldman recently calculated, further rate cuts are “a very uncomfortable prospect” for the
sector, and an indicative -20bps rate cut could lead to an aggregate €5.6bn (-6%) profit cut for the 32 Euro banks under Goldman coverage, with 12 banks facing an >10% EPS cut, and 5 banks >20%. Worse, if Draghi were “forced” to cut rates further still, by say -100bp, one quarter of European banks would turn loss making or break-even, and 75% would not meet their cost of capital, according to Goldman calculations.

First, we lay out a quick, 6-chart summary of what Goldman’s economists will take place in the coming months in Europe: 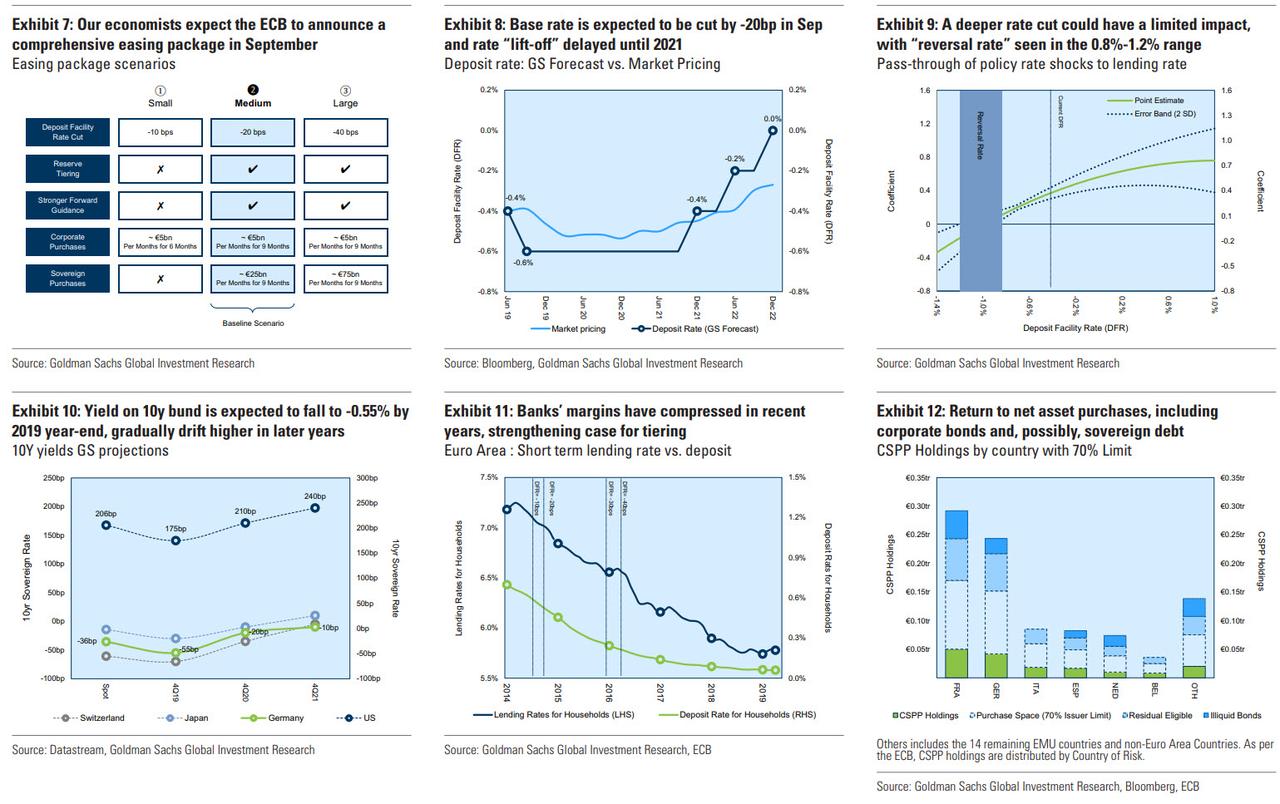 Next, below are the details from Goldman’s analysis on rate cut-associated hits to income and capital:

A decline in €-rates by -20bps across the yield curve, all else equal, has scope to lower NII and earnings of Euro area banks under our coverage by -3% and -6%, respectively. A profit hit of €5.6 bn would reduce ROTE for the 32 banks under our coverage by 0.6ppt to 8.2%. This said, for 12 banks the EPS impact, measured on a fully loaded pro-forma basis, could be >10%, and for 5 banks >20%. These are meaningful impacts.

Bank-by-bank rankings for banks under Goldman’s coverage are laid our below: 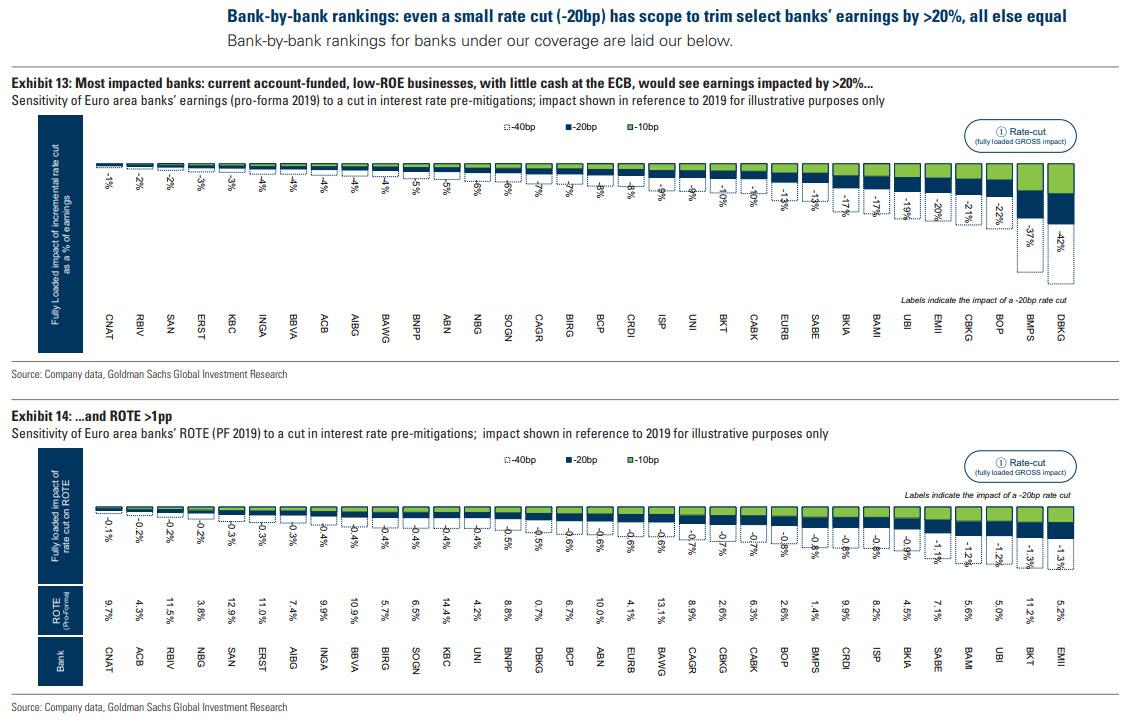 And the next chart shows the aggregate impact of a -20bps rate cut on European banks. 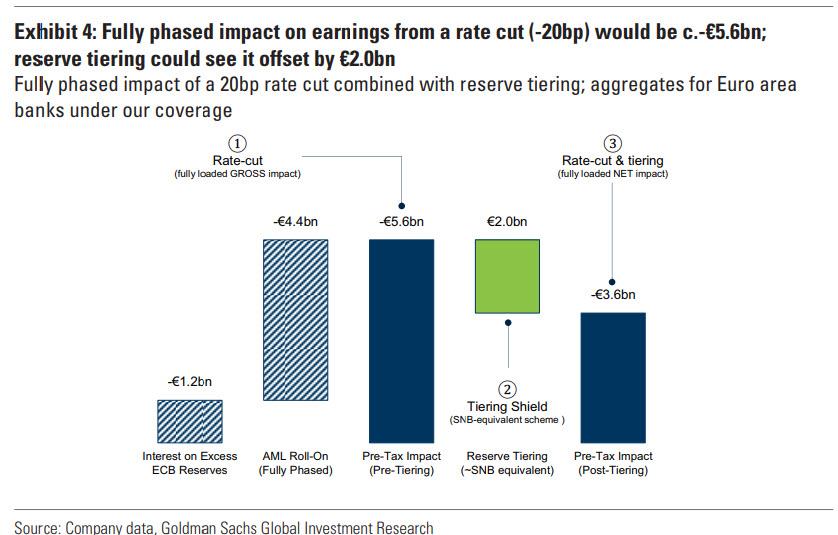 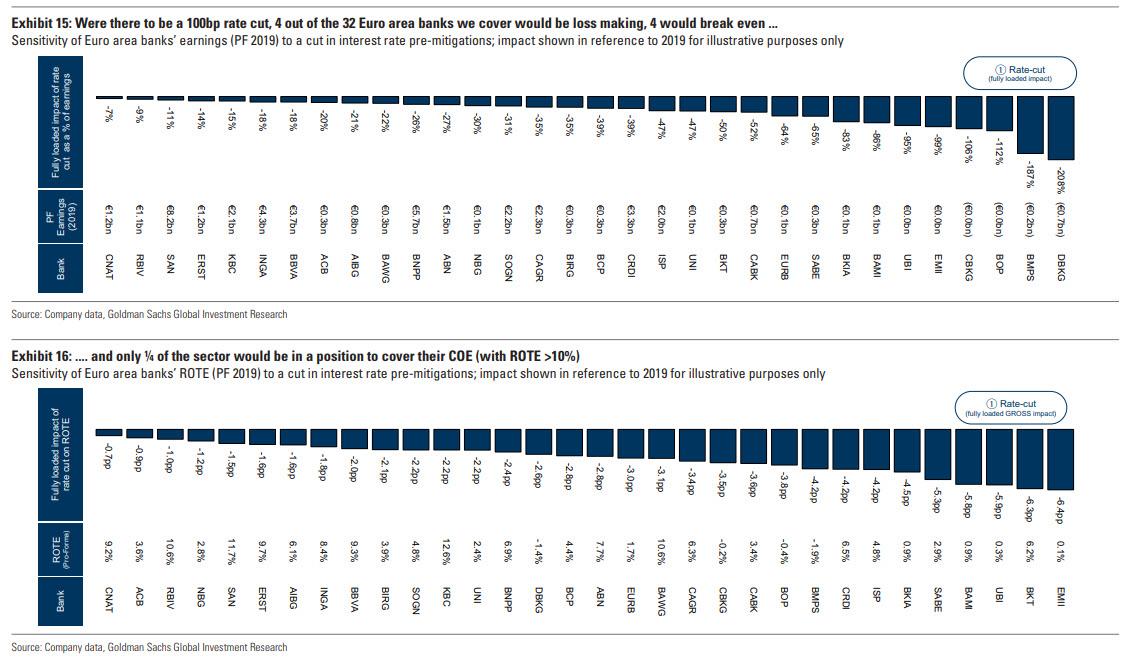 Empirical evidence – or just one look at Deutsche Bank’s stock price – confirms that the ECB’s negative rates have been revenue and profit negative, to wit from Goldman:

Sharp declines in both short- and long-term rates over 2014-16 corresponded to a substantial (>10%) NII estimate cut, a magnitude which put the sector’s profitability under pressure. However, there are key differences between the current outlook and historical experience, in particular during 2014-16 when rates first turned negative. With diminishing scope to lower deposit rates further and little evidence of easing pressure on lending margins (in particular given the extension of TLTRO, APS), an introduction of reserve tiering by the ECB screens as a key measure to stabilise the Euro area banks’ sector profitability. 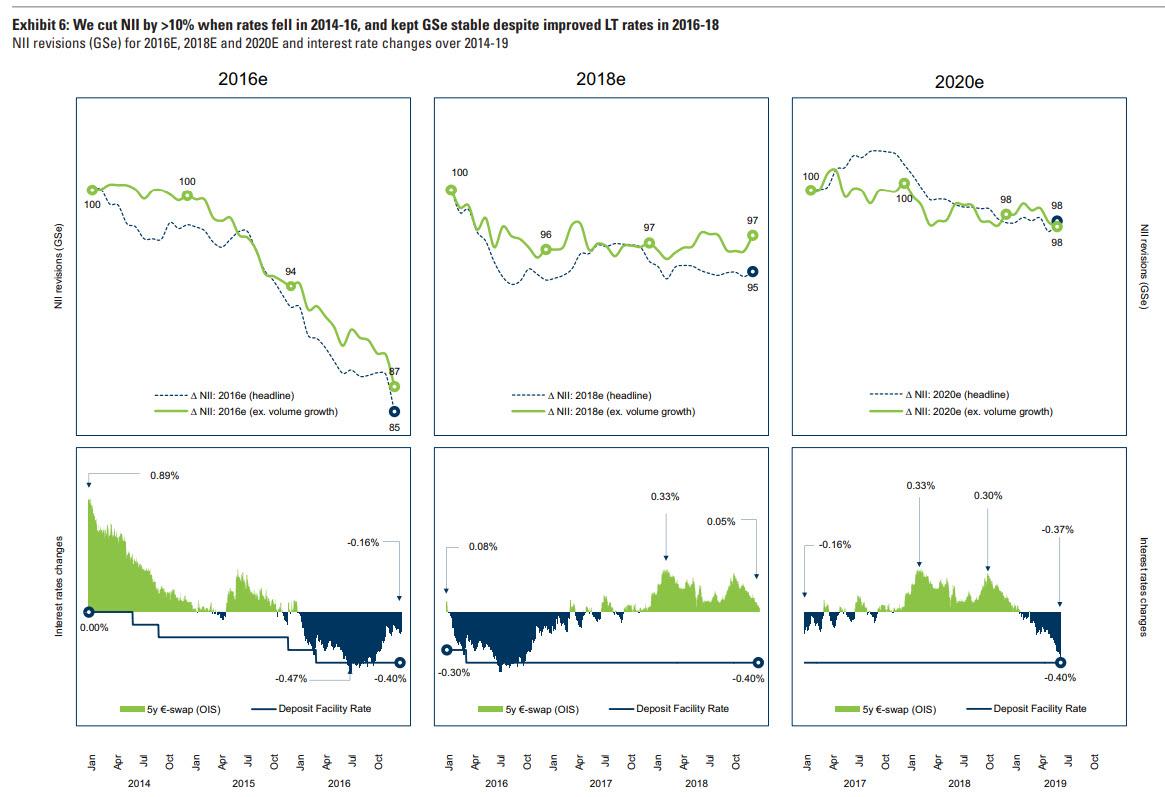 There is just one potential loophole for the ECB to avoid destroying Europe’s banks by cutting rates further. As Goldman notes, deposit rate tiering is therefore critical.

Unlike Japan or Switzerland, the ECB does not offer deposit rate tiering, and thus its introduction would be critical for moderating the impact of an incremental rate cut. According to Goldman, the ECB adopting the Swiss model of tiering has scope to reduce the negative effect by ~⅓.

Without tiering, an extremely challenging operating environment becomes worse, and may push an increased number of banks towards break-even, or even loss making territory. However, not all tiering is the same, and the schemes in use  vary greatly in the extent of the offset they provide. In our mind, key questions centre around the following two issues:

Implementation aside, we see a strong fundamental case for tiering. Euro area banks paid c. €21bn to the ECB since negative deposit rates were first applied in 2014, with the current €7.5bn annual charge set to increase if an incremental rate cut materialises. The skew of ECB’s deposit charge is high, and incurred almost entirely (>80%) by German, French and Benelux banks. Finally, ECB’s absence of tiering is unlike the approach pursued by the Swiss or Japanese central bank

Finally below we lay out Goldman’s 4-step approach to gauging the impact of the ECB’s prospective rate cut on bank profits (overview in Exhibits 1-5): 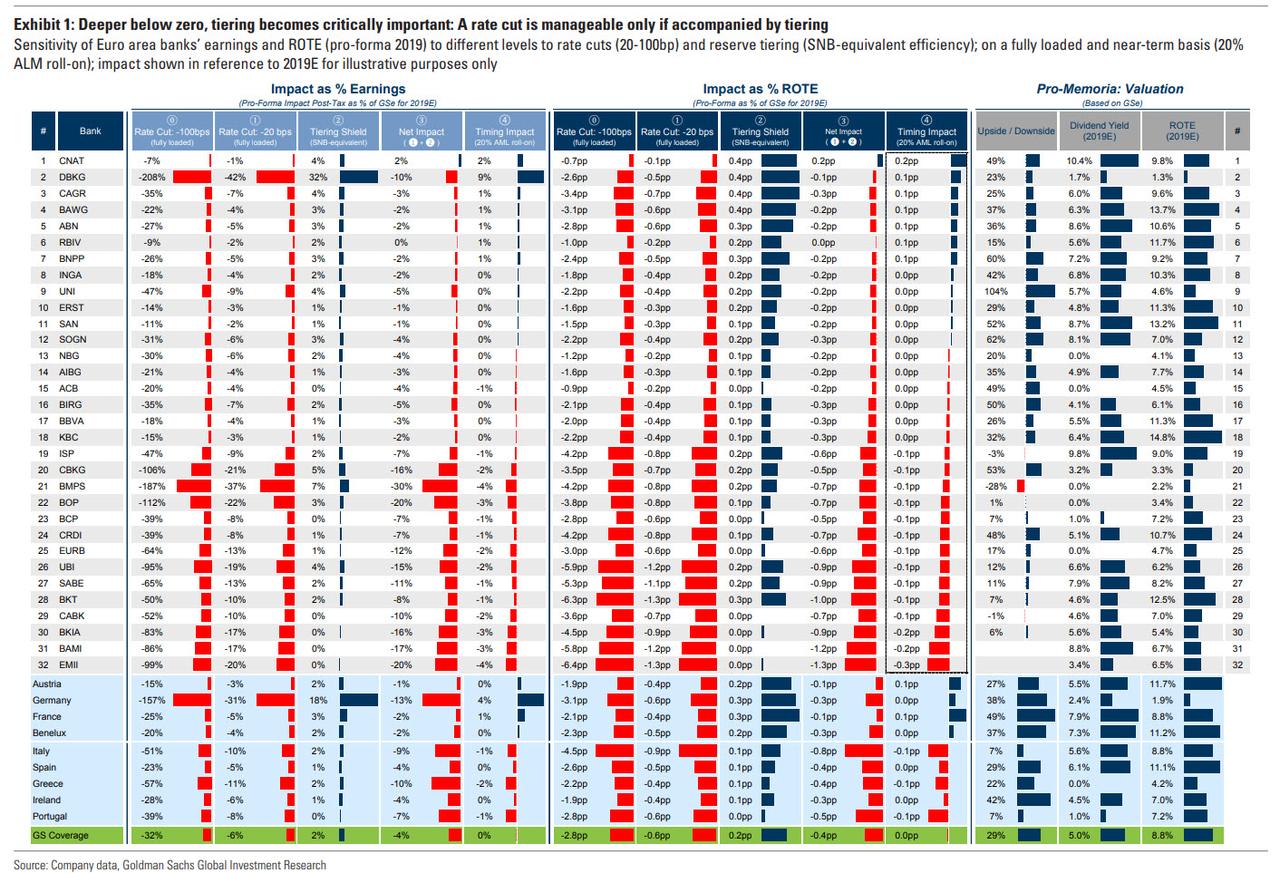 In other words, unless the ECB follows the BOJ and SNB into tiering, its rate cut could – ironically – end up being the straw that finally breaks the European’ banking system camel’s back.

In summary, a reduction in interest rates coupled with tiering impact would differ in magnitude as well as timing. While a negative impact of lower rates would exceed the positive revenue uplift associated with reserve tiering, the latter would likely be front-loaded, in our view. All in all, Goldman concludes that the near-term impact on Euro area banks may prove relatively modest given the upfront benefit of tiering could offset initial pressure from lower reinvestment yields.

On the other hand, it is unclear if even tiering would much, if anything to stop the melting of Europe’s €45 trillion melting financial icecube, Deutsche Bank.