Authored by Michael Lebowitz via RealInvestmentAdvice.com,

“When it becomes serious, you have to lie.” – Jean-Claude Juncker, former President of the Eurogroup of Eurozone finance ministers

On July 16, 2019, Chicago Federal Reserve President Charles Evans made a series of comments that were blasted across the financial news wires. In the headlines taken from his speech on the 16th and other statements over the past few weeks, Mr. Evans argues for the need to cut interest rates at the July 31stmeeting and future meetings.

In this article, we look at his rationale and provide you with supporting graphs and comments that question his logic supporting the rate cuts. We pick on Charles Evans in this piece, but quite honestly, he is reiterating similar themes discussed by many other Fed members.

The issues raised here are important because the Fed continues to play an outsized role in influencing asset valuations that are historically high. As such, it is incumbent upon investors to understand when the Fed may be on the precipice of making a policy error. If asset prices rest on confidence in the Fed, what will happen when said confidence erodes?

Before comparing reality with his recent headlines, it is important to clarify the Fed’s Congressional mandate as stated in the Federal Reserve Act. The entire Federal Reserve act can be found HERE. For this article, we focus on Section 2A- Monetary Policy Objectives as follows:

The stock market is at all-time highs, bond yields are well below “moderate,” unemployment stands at 50-year lows, and prices are stable. Based on the Fed’s objectives, there is certainly no reason to cut rates.

All of the headlines below are courtesy of Bloomberg News and the data is sourced from Bloomberg and the St. Louis Federal Reserve

There are a lot of risks out there, citing BREXIT

BREXIT, the UK withdrawal from the European Union (EU), passed in a public referendum over three years ago. Since then, lawmakers on both sides of the Channel have tried unsuccessfully to fulfill voters’ wishes. The exit was supposed to occur by March 29, 2019 but was extended to October 31, 2019. BREXIT is not a new risk. In fact, there was a high likelihood of a hard BREXIT in late March before the extension, and the Fed never mentioned it then as a reason to take action.  Further, the Bank of England (BOE) and the European Central Bank (ECB), not the Fed, are the parties that should be first in line to mitigate any financial/monetary risks associated with Europe and any repercussions coming from BREXIT. At some point Fed action may be warranted if a hard BREXIT occurs and rattles global economies. However, acting in advance on what might or might not happen is not the Fed’s job.

There are other risks, such as the ongoing trade war with China, the coming debt cap, and Iran to name a few. We ask you though, has there ever been a period where numerous concerns and risks did not exist?

Fed should not generate excess stimulus

The first graph quantifies the level of Fed Funds and the amount of QE, allowing us to compare monetary stimulus over the last 40 years. Clearly, the last ten years, including the current period, is excessive and if anything means the Fed should be removing “excess stimulus.” 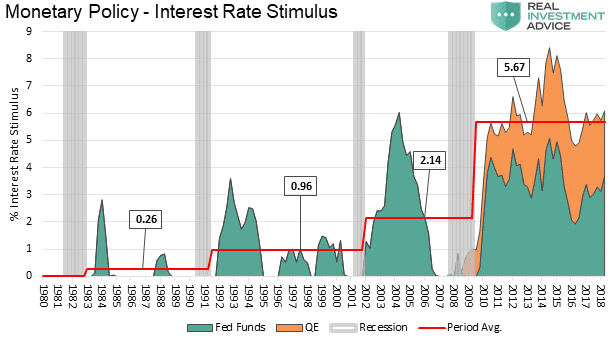 For more details on this graph and other measures of excessive stimulus, please read our article Why the Fed’s Monetary Policy is Still Very Accommodative.

Other evidence also indicates that current monetary policy is excessive. For instance, the graph below, courtesy of Mr. Evans own Chicago Federal Reserve, shows that national financial conditions are near the easiest of any period in the last 50 years. Of the 2,531 weekly data points in the graph, only 60 weekly periods (2.3%) had easier financial conditions than today. Again, conditions are easy because monetary policy is very accommodative. Excess is an appropriate term to describe the state of monetary policy and it may actually be an understatement.

The Federal Reserve Act clearly says the Fed should promote stable prices. Stable prices do not axiomatically mean 2% inflation as they have interpreted it. The Act also makes no mention of persistent inflation that compounds over time.

The following graph shows the level of prices since the Revolutionary War. From 1775 to 1971 prices were relatively stable, except during times of war. Since 1971, when Nixon revoked the gold standard and allowed the Fed carte blanche to manipulate the money supply, higher annual prices have accumulated, resulting in massive price inflation.

The Fed’s 2% inflation target is a far cry from the price stability mandate to which they are supposed to adhere.

Says path of U.S. economy is toward trend growth

The following graphs show various measures of inflation and inflation expectations. It is hard to point to any recent inflation trends in these graphs that have meaningfully changed from the trends of the last few years. Given this broad set of data, why does the current inflation “situation” warrant even more aggressive monetary policy action?

Economic fundamentals are solid / U.S. economy is really quite solid

Mr. Evans is right. GDP was a little soft in the second quarter, but it was running above trend for the prior eight quarters. With Fed Funds still at dangerously low levels, the Fed’s balance sheet swollen beyond any historical precedent, and the economy “really quite solid,” his call for rate cuts does not reconcile with his own assessment of the economy.

Says he forecasts 50 basis points of accommodation to lift inflation

Using data going back to 1990, the graph below shows that there is no statistical relationship between the Fed’s (current) preferred measure of inflation (PCE) and the Fed Funds rate they manage. PCE measured a year forward to the current Fed Funds rate demonstrates even less of a relationship.

Based on data provided by the Fed, the idea that the Fed possess a magical joystick which enables them to control prices is fallacious. Evan’s statement lacks any statistical backing and is a complete guess at best. At worst, it is an intentional effort to influence public sentiment improperly.

The conclusions here suggest that Evans logic is flawed and misleading. Based on his arguments, the Fed has no basis to cut interest rates. Fed speakers that modify their language daily, as they have been doing over the prior month or two, to conjure support for rate cuts put their integrity and investor confidence in the Fed at risk.

The primary objective of Fed policy should be geared toward imperceptible adjustments to foster a well-functioning market-based economy. On the contrary, what we increasingly see is a market-economy increasingly jostled and cajoled by hair-on-fire day-traders posing as a monetary authority. By employing well publicized micro-management tactics, the Fed naturally increases the chances of a policy error. Indeed, the proper characterization of that risk is that the Fed increases the likelihood of further policy errors compounding the legacy issues already in play thanks to Powell’s predecessors.

Given the reliance of equity prices on the so-called “Fed Put” and the excessive valuations in many asset markets, we advise paying close attention as a policy error could quickly cause assets to re-price to properly reflect their inherent risks, and then some. Seldom do those adjustments stop at fair value.