Politics & Algos: “The Dems Have No ‘Trump'”

Authored by Raul Ilargi Meijer via The Automatic Earth blog,

It’s a development that has long been evident in continental Europe, and that has now arrived on the shores of the US and UK. It is the somewhat slow but very certain dissolution of long-existing political parties, organizations and groups. That’s what I was seeing during the Robert Mueller clown horror show on Wednesday.

Mueller was not just the Democratic Party’s last hope, he was their identity. He was the anti-Trump. Well, he no longer is, he is not fit to play that role anymore. And there is nobody to take it over who is not going to be highly contested by at least some parts of the party. In other words: it’s falling apart.

And that’s not necessarily a bad thing, it’s a natural process, parties change as conditions do and if they don’t do it fast enough they disappear. Look at the candidates the Dems have. Can anyone imagine the party, post-Mueller, uniting behind Joe Biden or Bernie Sanders or Kamala Harris? And then for one of them to beat Donald Trump in 2020?

I was just watching a little clip from Sean Hannity, doing what Trump did last week, which is going after the Squad. Who he said are anti-Israel socialists and, most importantly, the de facto leaders of the party, not Nancy Pelosi. That is a follow-up consequence of Mueller’s tragic defeat, the right can now go on the chase. The Squad is the face of the Dems because Trump and Hannity have made them that.

The upcoming Horowitz and Durham reports on their respective probes into “meddling into the meddling” will target many people in the Democratic Party, US intelligence services, and the media. In that order. Can the Dems survive such a thing? It’s hard to see. 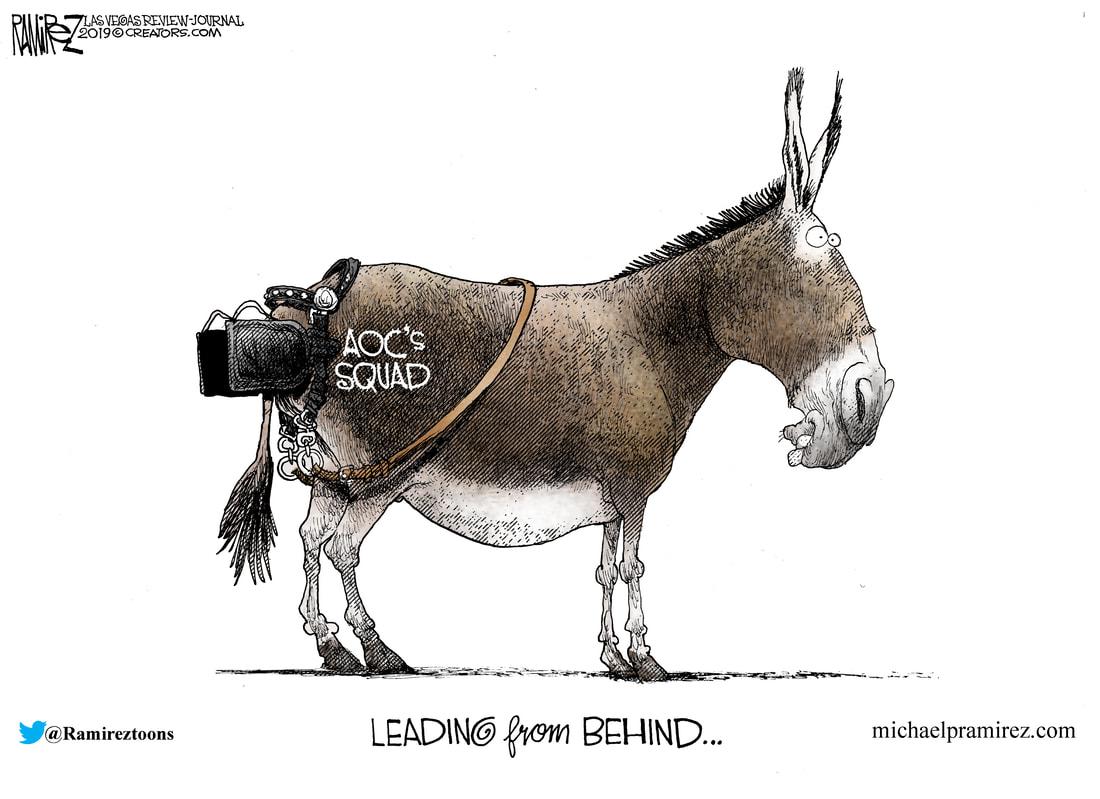 There’s Bernie and the Squad, the declared socialists, who will never be accepted as leaders by a party so evidently predicated upon support for the arms industry. And they in turn can’t credibly support candidates who do. The Democratic Party will never be socialist, they will have to leave the label behind in order to share that message and remain believable.

But without them, what will be left? Joe Biden, or perhaps Hillary silently waiting in the wings? I don’t see it. Not after Mueller, not after two-three years of gambling all on red anti-Trump. At least the Squad have an identity, got to give them that. Whether it will sell in 2019 America is another thing altogether.

I personally think the term socialist is too tainted, on top of being too misinterpreted, for it to be “electable”, but I also understand there are large swaths of the US population who are in dire straits already with a recession on the horizon, but 2020 seems too soon. And I would ditch the term regardless. It’s like painting a target on your back for Trump and Hannity to aim at.

If you remember the 2016 campaign and the clown parade on stage with the likes of Marco Rubio and Jeb Bush glaring at the headlights, you know that the GOP has issues that are very similar to those of the Dems. But Trump came along.

The Dems have no Trump. They do have a DNC that will stifle any candidate they don’t like (Bernie!), though. Just think what they would have done if Trump had run as a Democrat (crazy, but not that crazy).

The UK’s issues are remarkably similar to those of the US. Only, in their case, the socialists have already taken over the left-wing party (if you can call the Dems left-wing). This has led to absolute stagnation. Tony Blair had moved Labour so far to the right (which he and his Blairites call center, because it sounds so much better), that injecting Jeremy Corbyn as leader was just too fast and furious.

So they labeled Corbyn an anti-semite, the most successful and equally empty smear campaign since Julian Assange was called a rapist. Corbyn never adequately responded, so he couldn’t profile himself and now the Blairites are again calling on him to leave. Oh, and he never gave a direct answer to the question of Brexit yes or no either. Pity. Corbyn’s support among the people is massive, but not in the party.

Which is why it’s now up to Boris Johnson to ‘deliver the will of the people’. And apparently the first thing the people want is 20,000 more policemen. Which were fired by the very party he at the time represented first as first mayor of London and then foreign minister, for goodness sake. His very own Tories closed 600 police stations since 2010 and will have to re-open many now.

Some survey must have told him it polled well. Just like polling was an essential part of pushing through Brexit. There’s a very revealing TV movie that came out 6 months ago called Brexit: The Uncivil War, that makes this very clear. The extent to which campaigns these days rely on data gathering and voter targeting will take a while yet to be understood, but they’re a future that is already here. Wikipedia in its description of the film puts it quite well:

After the opening credits, [Dominic] Cummings rejects an offer in 2015 by UKIP MP Douglas Carswell and political strategist Matthew Elliott to lead the Vote Leave campaign due to his contempt for “Westminister politics”, but accepts when Carswell promises Cummings full control.

The next sequences show Cummings outlining the core strategy on a whiteboard of narrow disciplined messaging delivered via algorithmic database-driven micro-targeting tools. Cummings rejects an approach by Nigel Farage and Arron Banks of Leave.EU to merge their campaigns, as his data shows Farage is an obstacle to winning an overall majority.

[..] In a eureka moment, Cummings refines the core message to “Take Back Control”, thus positioning Vote Leave as the historical status quo, and Remain as the “change” option. Cummings meets and hires Canadian Zack Massingham, co-founder of AggregateIQ, who offers to build a database using social media tools of [3 million] voters who are not on the UK electoral register but are inclined to vote to leave.

[..] In the final stages, high-profile senior Tory MPs Michael Gove and Boris Johnson join the Vote Leave campaign emphasising the need to “Take Back Control”, while Penny Mordaunt is shown on BBC raising concerns over the accession of Turkey. Gove and Johnson are shown as having some reticence over specific Vote Leave claims (e.g. £350 million for NHS, and 70 million potential Turkish emigrants) but are seen to overcome them.

Dominic Cummings, played in the movie by Benedict Cumberbatch, is an independent political adviser who belongs to no party. But guess what? He was the first adviser Boris Johnson hired after his nomination Wednesday. Cummings didn’t want Nigel Farage as the face of Brexit, because he polled poorly. He wanted Boris, because his numbers were better. Not because he didn’t think Boris was a bumbling fool, he did.

He can’t have elections before September, because of the summer recess. So perhaps end of September?! But he has Dominic Cummings and his “algorithmic database-driven micro-targeting tools”. Without which Brexit would never have been voted in. So if you don’t want Brexit, you better come prepared.

Cummings and his techies weren’t -just- sending out mass mails or that kind of stuff. That’s already arcane. They were sending targeted personalized messages to individual voters, by the millions. Algorithms. AI. Tailor made. If you’re the opposition, and you don’t have those tools, then what do you have exactly?

Already thought before it all happened that it was funny that Boris Johnson’s ascension and Robert Mueller’s downfall were scheduled for the same day. There must be a pattern somewhere.

You can find the movie at HBO or Channel 4, I’m sure. Try this link for Channel 4. Seeing that movie, and thinking about the implications of the technology, the whole notion of Russian meddling becomes arcane as well. We just have no idea.