Now, Compared To The Last Time The US Entered A Recession: It Couldn’t Be Worse

With the most important week for newsflow set to begin shortly, with the Fed expected to launch its first easing cycle in over a decade on July 31, the only question investors want answered is whether the Fed will cut rates by 25bps (while this is now fully priced in, many suggest it may be too little and lead to a sharp drop in risk assets) or by 50bps (which many see as overkill considering the relatively stable state of the US economy).

While the NY Fed recently and unceremoniously slapped down its president, John Williams, in an unprecedented example of the Fed’s failure to communicate, for suggesting it was now accepted that a 50bps rate cut is FOMC consensus, in effect sharply lowering the odds of a 50bps rate cut, the truth is that nobody knows what will Powell will announce on Wednesday. So, in order to give some further perspective on where the US economy is now, compared to September 2007 – when the Fed also started an easing cycle by cutting rates by 50bps to insure against uncertainty resulting from tighter financial conditions, and just two months before the last recession officially began in December 2007 – Morgan Stanley compared some of the key leading and market indicators now and back in September 2007.

As Morgan Stanley credit strategist Matthew Hornbach writes, one needs to look at the first cut in 2007 without the benefit of hindsight – meaning, the Fed’s decision to cut 50bp had nothing to do with the coming financial crisis. It was about lessening downside risks coming from tighter financial conditions. Fast forward to today when it’s about downside risks coming from global growth and trade uncertainty.

And here Hornbach makes a the stunning observation: as shown in the exhibit below, things look worse today than at the September 2007 meeting on every metric. 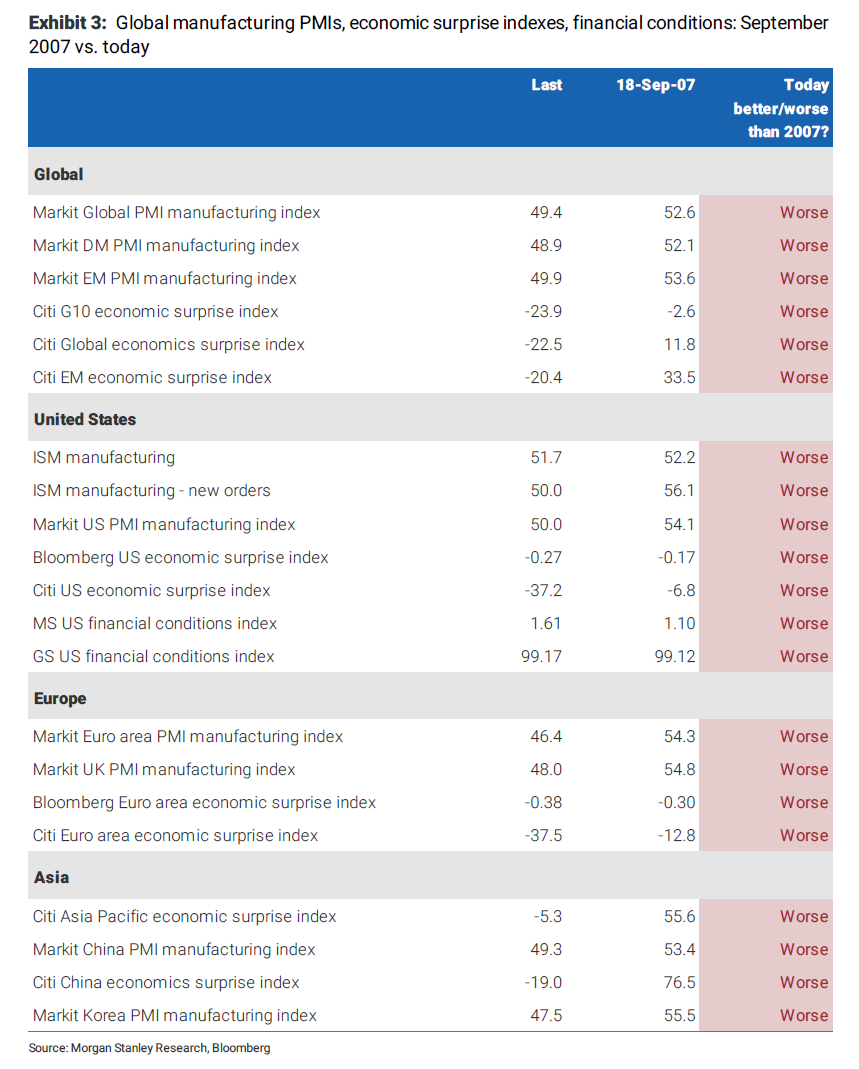 Of course, as MS admits, not everything looks worse than it did in September 2007, like some of the nonmanufacturing (services) PMI data (which the Fed isn’t focusing on when it comes to downside risks). The US labor market data also look better today than in late 2007. In particular, a very weak nonfarm payroll report occurred in early September 2007 (August NFP -4k vs. 100k expected; July revised down 125k to -33k.

On the other hand, developments in financial markets since the Committee’s last regular meeting have increased the uncertainty surrounding the economic outlook. The Committee will continue to assess the effects of these and other developments on economic prospects and will act as needed to foster price stability and sustainable economic growth.

Putting it all together, Morgan Stanley firmly believes, as we first noted last Sunday in “A 25bps Cut Won’t Be Seen As Aggressive, And Will Disappoint The Market“, that it will be hard for the FOMC to look at the chart above and think a 25bp cut would be enough at this point.

Perhaps, MS is right, and the consensus is actually too hawkish at the moment, and Powell will indeed cut 50bps at 2pm on July 31. While we don’t know what the Fed’s ultimate decision will be, we have a nagging feeling it won’t matter much as we will simply remind readers of what happened back in Sept 2007 when the Fed did cut 50bps.

It will be delightfully ironic if the Fed’s rate cut in three days unleashes a similar chain of catastrophic events.