One of the constantly repeated mantras of this stock market, which keeps rising no matter how much bad news is lobbed at it, is that it is climbing a wall of worry as investors refuse to participate in the “most hated bull market of all time”. This has been, at its core, the primary reason why JPMorgan’s Marko Kolanovic has been bullish on stocks for the past several hundred points.

There is just one problem with this conventional wisdom: as often happens, it is dead wrong, and as JPMorgan’s “bad cop” strategist, and now chronic foil to Koalnovic’s unbridled permabullishness, Nick Panigirtzoglou wrote on Friday, not only are investors very much long risk, but most asset classes have now been massively “overbought”, with some positioning levels in record territory.

Case in point, the combined asset-manager and leverage fund positioning in U.S. equity futures the most extended in years this decade, if not ever. 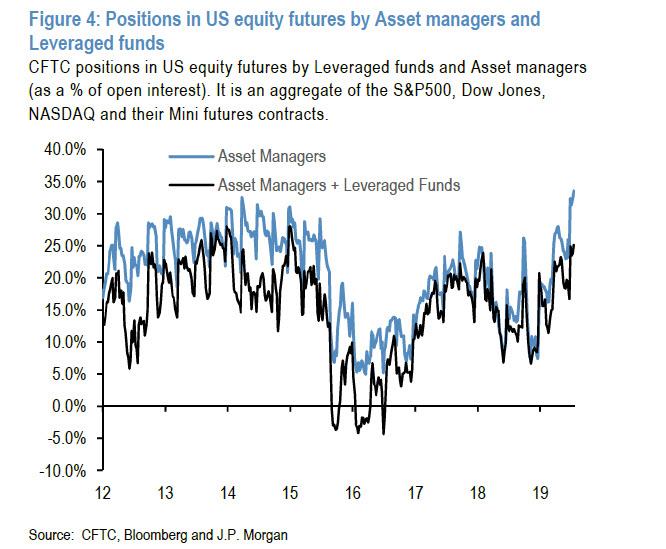 In the EM fixed income space, Panigirtzoglou shows the next chart, which shows that emerging market external debt overweights in JPM’s EM fixed income client survey are near levels last seen in 2005. 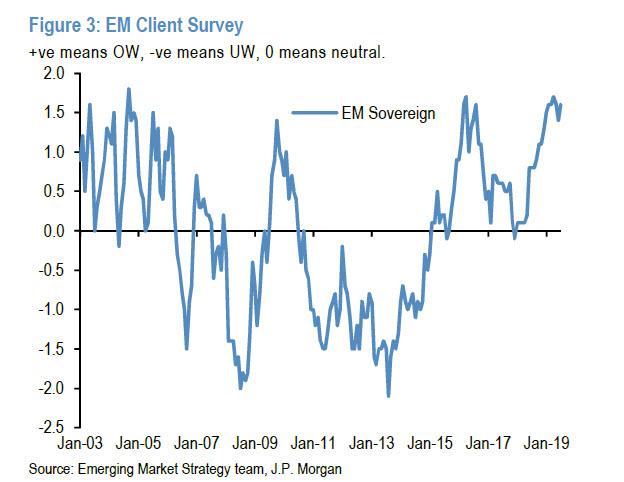 In the government bond space, while not at all time highs, the duration longs implied by European fixed income client survey, whose the most elevated duration longs in four years. 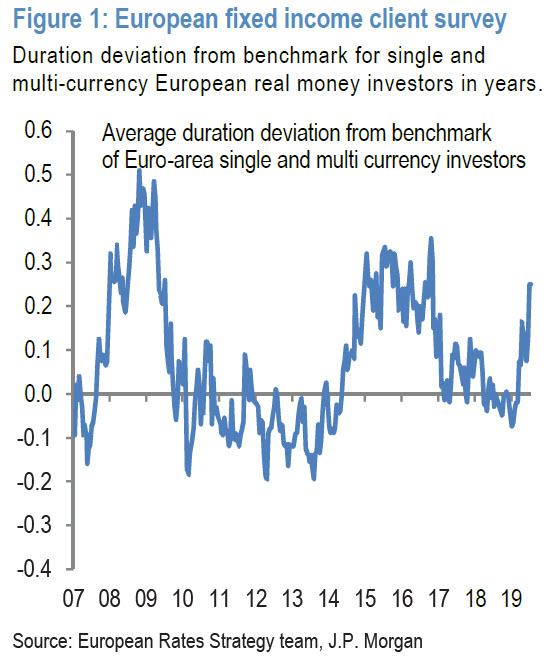 While longs are rushing into both risk and safe haven assets, and pretty much anything that isn’t nailed down, the shorts are getting crushed.

Consider first the chart below, which shows how low the short interest on the biggest US HY ETFs is at the moment, in contrast to the persistently high short interest observed for much of 2018. In other words, relative to last year, investors have closed their short exposure, and added significantly to their net HY exposures, something that is also consistent with the YTD reversal of last year’s HY ETF outflows. 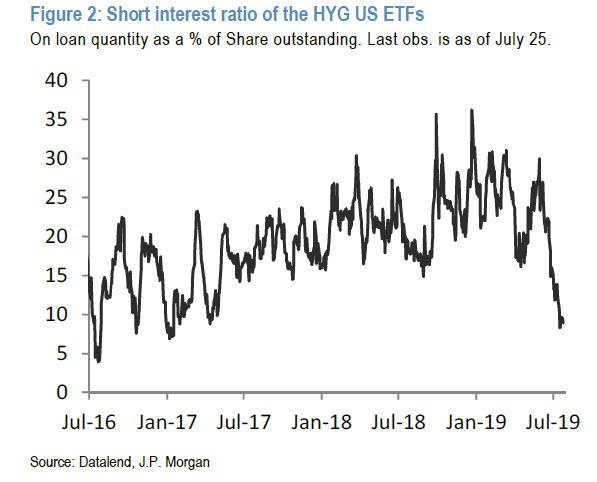 A similar observation can be made in the equity tech space, where shorts have similarly capitulated, “again pointing to overbought conditions for this sector.” 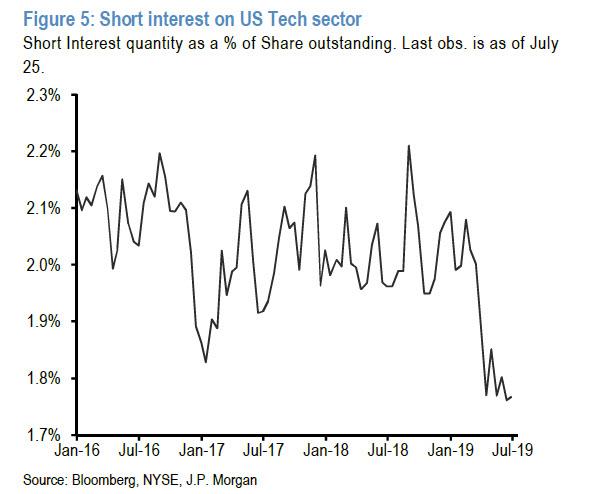 Why is the above relevant? Because as Bloomberg notes, “investors betting the U.S. Federal Reserve is set to extend the market bonanza with a rate cut may have overplayed their hand.”

One such investor is the multi-asset team at Aberdeen Standard Investments, which is preparing for disappointment as it lightens up on equity and emerging-market debt holdings ahead of the Fed’s meeting this week.

“This is an environment where there could be swings in sentiment, and we need to position ourselves for that,” said Ken Adams, head of tactical asset allocation at Aberdeen Standard Investments. “Maybe we won’t see the extent of monetary policy easing that’s now priced in. Investor expectations have become a bit too upbeat.”

Commenting on these observations, Panigirtzoglou writes that “the assets that have benefited from the low yield environment are vulnerable to retrenchment if central banks fail to validate market expectations of easing over the coming months.”

The JPM strategist also notes that whereas the so-called TINA, or There Is No Alternative, argument is often mentioned in client conversations as an argument to keep playing the asset reflation trade even if central banks fail to validate market expectations of easing, he disagrees, and believes that “There Is An Alternative (TIAA) which is dollar cash
which is yielding close to 2.25% (1m T-bills) at the moment well above the 1.4% yield of either the Global Agg bond index or the next high yielder in G10 (1m NZD bills), and above 10y UST yields without taking duration risk.”

And speaking of central bank disappointment, that’s precisely what Morgan Stanley believes will happen if the Fed cuts less than 50bps on Wednesday, something which the NY Fed hinted will not happen when it vocally corrected its president John Williams two weeks ago, when the latter hinted at a double 25bps rate cut on July 31.

As a reminder, Morgan Stanley also cautioned that the disconnect between fundamental data and actual/promised future central bank easing has never been more pronounced in the equity market… 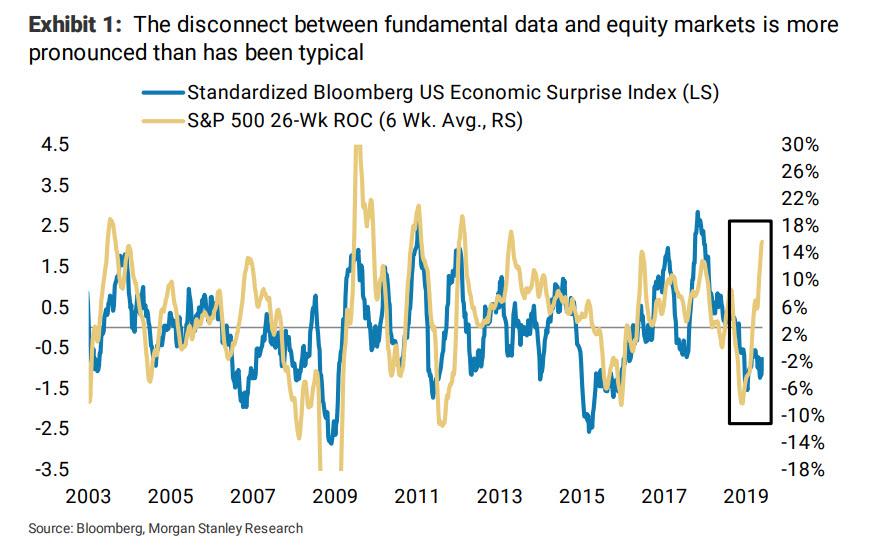 … and explained that “the growth and market impact of trend-following systematic strategies over the past decade may have driven this sharp divergence.” In this context, Morgan Stanley’s chief equity strategist, Michael Wilson, cautions that “any reversal in stock prices could lead to a faster and deeper drawdown than many are expecting.“

A reversal that would emerge once the Fed cuts by only 25bps, even as a still sizable portion of the market expects at least 50bps of cuts this week…