Central Banks Can No Longer Inspire Traders To Buy Every Dip

It was a bizarre week for traders who were left whipsawed by some of the most violent market moves of 2019: even though the S&P 500 closed the week barely lower, down 0.5% over the five days, it suffered the year’s worst rout Monday and another modest drop Friday, while sandwiched inbetween was the biggest three-day rally in two months, which prompted many to ask if this was just another case of BTFD.

The answer, according to Bank of America is yes. As the bank’s equity derivatives team led by Benjamin Bowler writes, on Monday simple buy-the-dip trading rule (first introduced in 2016 and designed to demonstrate how unusually fast markets were rebounding from selloffs) was triggered for the second time this year as the S&P declined more than 5% from its previous 10-day intraday high.

As a reminder, while the trading rule worked well between 2013 and 2017 (9 of 11 dips were bought back) it failed dramatically on 4 of 5 times during 2018 as investors did not believe that Powell would backstop markets à la Bernanke and Yellen (that has since changed). And while the first time the BTD rule was triggered in May 2019 was a “partial success” (the S&P recovered 2.7% from the trigger), the market’s response function was not as strong as observed previously in 2017.

What is most troubling to the bulls, however, is that even after Powell’s dovish U-turn in January and initial crush in cross-asset implied volatility, central banks have not been able to recreate the Pavlovian response to buy every equity dip which was instrumental in creating the record low vol environment of 2017. Indeed, the VIX has averaged 15.6 year-to-date, much closer to 2018’s average of 16.6 and still well-above 2017’s average of 11.7. 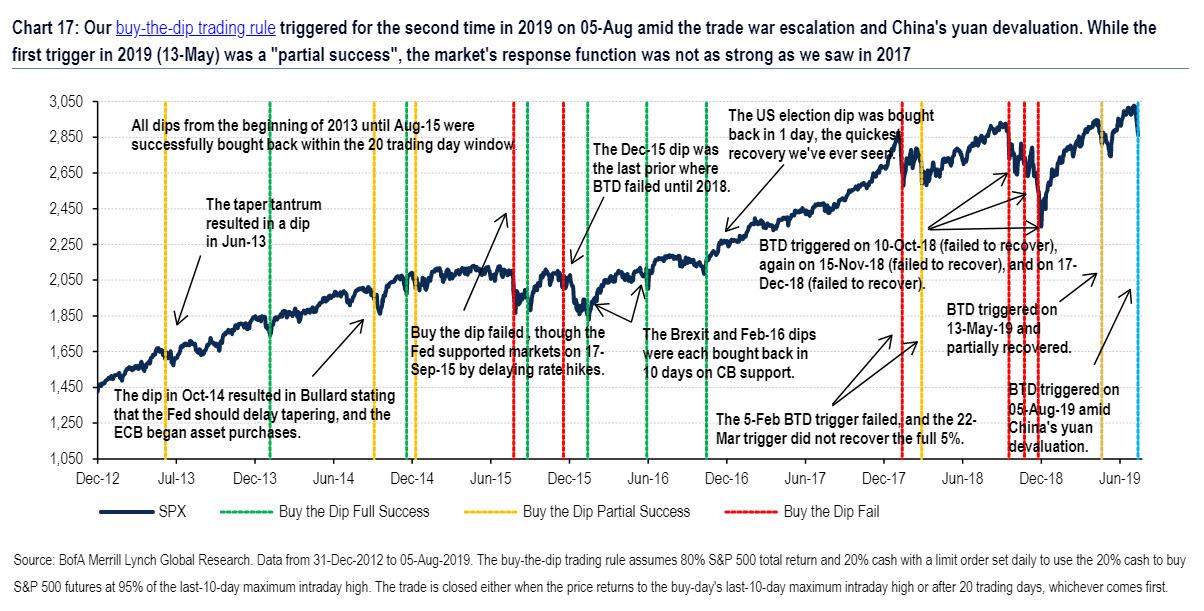 For those feverishly asking when the Fed will lose its independence (clearly unaware that it has never been truly independent in its 100+ year history, beholden first and foremost to its private financial sector owners), the answer is simple: when the market no longer has faith that the US central bank can result in market levitation. At that moment, the Fed will have outlived its utility. We are rapidly approaching that point.

Hedge Fund CIO: To Markets It No Longer Matters Who Wins The Election

How the Progressives Conquered Corporate America