By One Measure, Investors Have Never Been More Worried About The Future

In reaction to the deteriorating global economic outlook and rising risks to the world economy, central banks around the world have unleashed a coordinated dovish effort to boost growth. And while there is little evidence so far that CBs have successfully stimulated the real economy, their actions have contributed to supporting asset prices and suppressing volatility in most markets. As such, on the surface, markets do not yet seem particularly alarmed about the current situation, with our GFSI Market Risk indicator still in “less stressed than normal” territory.

However, by at least two measures, central banks are failing. The first one was highlighted by the University of Michigan sentiment, which reported this morning that the main takeaway for consumers from the first cut in interest rates in a decade “was to increase apprehensions about a possible recession.”

“Consumers concluded, following the Fed’s lead, that they may need to reduce spending in anticipation of a potential recession” the report noted as falling interest rates have long been associated with the start of recessions.

The second measure was more troubling. As Bank of America’s Benjamin Bowler showed in his weekly Global Equity Volatility report, when analyzed through the prism of the unprecedented recent flight to safety, investors have not been so worried about the future in the thirty years that Bank of America has data on (in other words, on record).

Specifically, as the chart below shows, the cumulative number of abnormal moves in traditional safe-haven assets – Treasuries, Gold and Yen -observed in 2019 has never been so high! 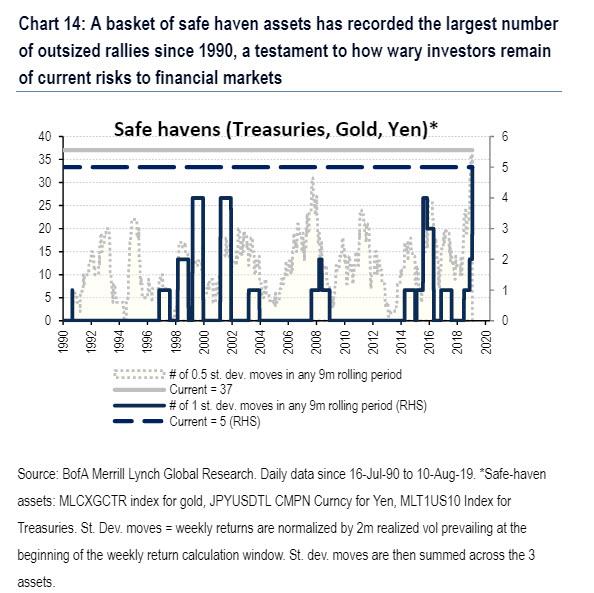 Now in a non-bizarro world, the combination of the S&P trading just 5% below all time highs, coupled with an unprecedented flight to safe assets may have prompted some questions. Luckily, in this particular bizarro world, nothing matters and with central banks having broken markets beyond recognition, nobody even cares.

China’s Religious Persecution In The Age Of COVID-19

WHO Says COVID Origins Will Be Found “Within A Few Years”

“Stairway To Seven”: Why Deutsche Expects FX Turmoil This Summer

Aramco Attacks An “Act Of War” By Iran: Pompeo After Arriving In Jeddah