A new report from the China Gold Association, first examined by China Daily, said gold consumption in China reached 523.54 metric tons in 1H19, down 3.27% YoY, due mostly to offlining of production facilities, the demise of zombie company producers, and readjusting the industrial structure to a period of lower demand.

“China’s total gold output decreased as the industry is upgrading the production techniques and cleaning up some mining rights issues,” said Zhu Yi, senior analyst of metals and mining at Bloomberg Intelligence.

The association said, “domestic companies in the gold sector have been pushing forward high-quality development, to close down outdated production facilities, optimize the industrial structure, integrate high-quality gold resources, against a background of global macroeconomic weakness and domestic economic restructuring.”

Zijin Mining Group Co saw stellar YoY growth of its overseas gold output in the 1H19. The miner has been focusing its efforts on expanding projects in countries with rich deposits of gold and copper.

Chen Jinghe, Chairman of Zijin Mining Group Co, told China Daily that its overseas mines are the main focus at the moment.

Zhu believes gold production and consumption in the country will remain depressed through the early 2020s. China’s gold industry is slowing, the days of super growth are over.

“Large-scale gold producers are increasing capacity and output to ride on the price hike. Going overseas for mining assets is one of the quickest ways to add reserves and output.”

Gold prices are likely to remain elevated due to its safe-haven function amid central banks shifting global policy rates towards zero as a worldwide recession could be imminent.

Spot prices broke above a 22 quarter neckline in June, prices have moved up 26% in 11 months.

The association said China’s gold output fell 9.6 tons to 180.68 tons in 1H19, down 5.05% YoY, as miners cut production, suspension of production due to environmental and technical issues, and modernization efforts of facilities in Henan and Inner Mongolia.

However, gold reserves in China were up for the seventh consecutive month in June, with reserves reaching 1,926.55 tons. 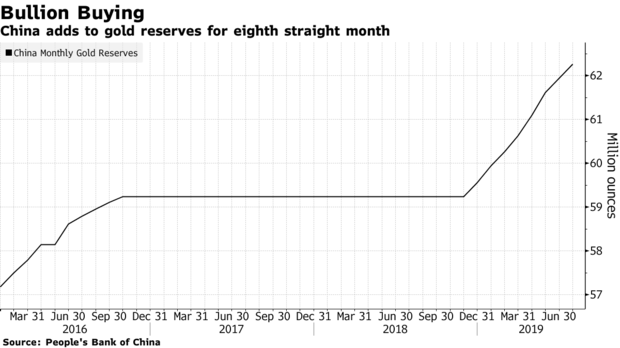 China added 74.03 tons of gold in 1H19, as, along with many other global nations, it attempts to de-dollarize and reduce dependency on the US hegemon.

Coinbase Has A New Plan For Dealing With Office SJWs: Pay Them To Leave

AFRICOM Confirms Terrorist Attack On US Base In Kenya

Illinoisans Will Be Among Nation’s Hardest-Hit In Next Recession