Nio Plunges 22%, Drags Down Tesla, After Slashing Headcount By Over 20%

Nio Plunges 22%, Drags Down Tesla, After Slashing Headcount By Over 20%

Electric carmaker NIO announced on Tuesday morning that it would be slashing its global headcount by more than 20% to 7,800 by the end of the third quarter. This is down from over 9,900 in January 2019, according to Bloomberg. The company said the slashing of jobs was “in response to the overall tempered market conditions” in a statement. We have routinely documented the ongoing collapse of the global automotive industry – not just in China, but also in key markets like Europe and North America – over the last 18 months.

Meanwhile, Nio stock, which had already been decimated by more than 80% over the last 12 months, continued its descent on Tuesday, falling about 22% as of the time of this writing.

As part of its announcement, Nio said it has implemented “comprehensive efficiency and cost control measures” as a result of market conditions. The company will also aim to pursue more restructuring, including spinning off some non-core businesses by year end.

According to Bloomberg, the company also offered the following financial guidance:

In a note out early Tuesday afternoon, GLJ Research analyst Gordon Johnson said the news was bad across the board for automakers in China: “While some may be (incorrectly in our view) viewing this as a positive for everyone who isn’t NIO, NIO’s 2Q19 numbers and 3Q19 guidance suggest demand in China for EVs is very bad.”

He explained his reasoning: “Why? Well, simply put, while NIO recently launched its ES6 model (their least expensive car), they are guiding to a sequential decline of -20% when looking at deliveries in September vs August. And August deliveries of 1,943 missed their guided range of 2,000-2,500.”

Nio’s collapse also dragged down Tesla stock, which had slumped more than 5% as of the time of this writing.

Johnson explained why the Nio news could also be material for Tesla and its shareholders:

“Against this backdrop, NIO competitor TSLA is currently spending billions to increase capacity/supply in the struggling Chinese EV market. When considering large TSLA holder Baillie Gifford is a large NIO shareholder as well, should BG have to start selling to maintain liquidity, it could be quite ugly for all publicly traded EV stocks.”

Recall, days ago, we posted that S&P was predicting that global light vehicle sales would fall by 2%-3% in 2019 and, to add insult to injury, there would be “no growth” throughout 2020 and 2021. In a research note out last Tuesday, S&P said that sales in China will decline by 7%-9% this year and that U.S. sales will see a 3% decline. It also predicts a 2% drop for European sales for 2019. 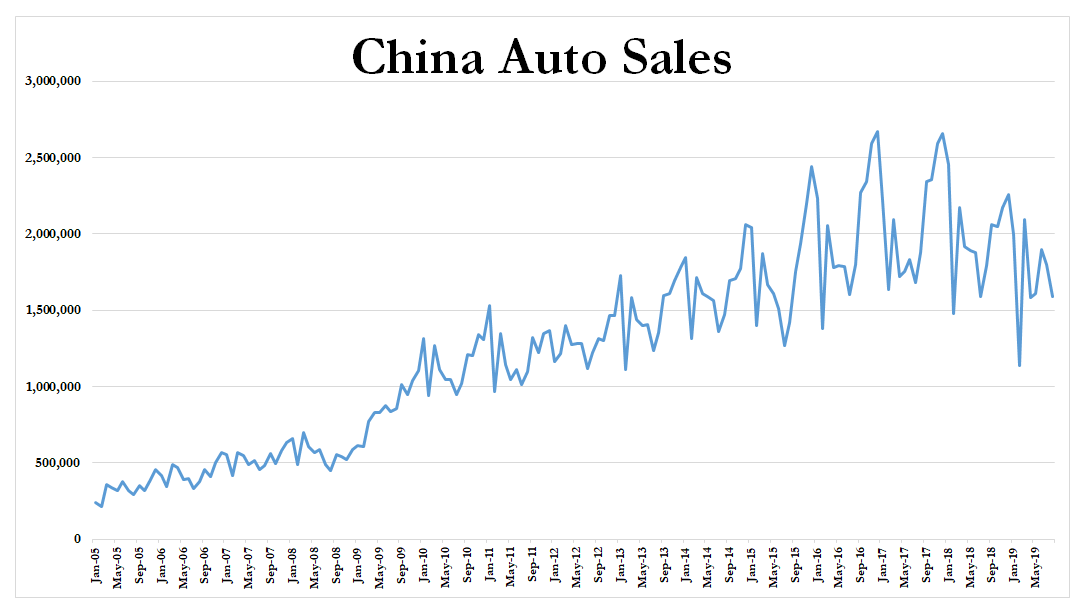 The note’s base case assumptions for 2020 and 2021 are 0% to 1% growth in global light vehicle sales. S&P also expects weakness in “all market regions except China, which may see a modest rebound, not before 2021”. S&P believes that manufacturers will grapple with margin erosion in the mass market segment and will struggle to pass through increased costs of connectivity, electrification and autonomous driving.

A few weeks ago we noted that the world’s biggest auto market, China, plunged deeper into contraction, with the country’s China Passenger Car Association releasing preliminary data for August that in no way indicates that the trend could be reversing. The CPCA reported that sales of sedans, SUVs, minivans and multipurpose vehicles in August fell 9.9% to 1.59 million units.

It has been the industry’s largest downturn in three decades. China has tried to roll out several stimulus measures to help the industry, including loosening car purchase restrictions, but they have done little to encourage consumption thus far. 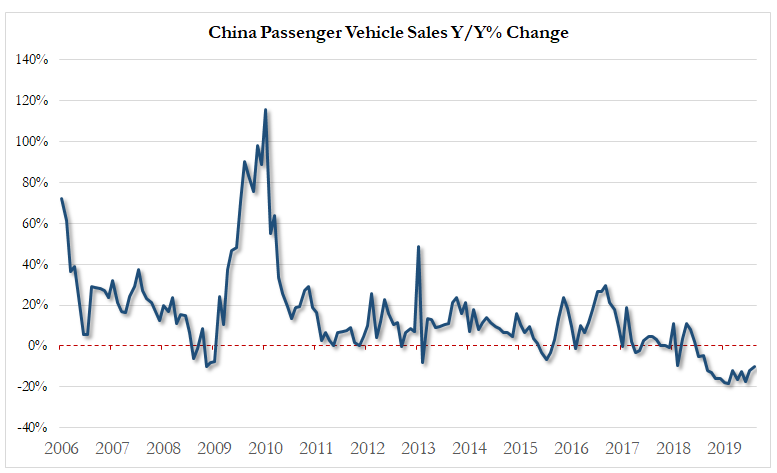 Eric Peters: Peter Navarro Was Right – Tariffs Have Spurred Growth, Not Hampered It

Marriage Rates Are Falling Due To Shortage Of “Economically Attractive” Men, Study Finds

Fewer Than Half Of Violent Crimes Are Solved In America