Dozens of anti-China protesters staged an in-game demonstration at a pre-season NBA game between the Brooklyn Nets and the Toronto Raptors in New York, after film producer Andrew Duncan bought 300 tickets for the activists. 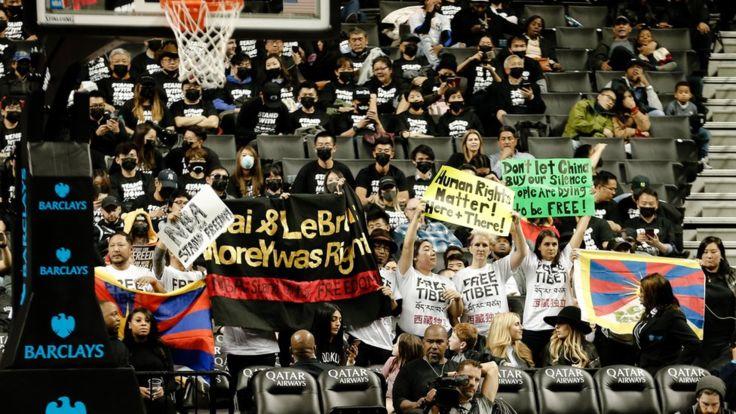 Donning “Free Tibet” and “Stand With Hong Kong” T-Shirts, the NBA protesters banded together in anti-China solidarity, according to the BBC. Two people were seen wearing Winnie-the-Pooh costumes – as the cartoon bear has become a symbol to mock Chinese President Xi Jinping, who has banned the bear.

The anti-China / pro-democracy movement which has gripped Hong Kong since March spilled over to the NBA after Houston Rockets manager Daryl Morey tweeted support for the Hong Kong protests. Despite quickly deleting the tweet, several Chinese firms suspended sponsorship of the league.

Among the group was Hong Kong activist Nathan Law, the former chairman of Demosisto, a pro-democracy party he co-founded with fellow campaigner Joshua Wong.

“We want to use our performance art to show our support for Hong Kong and the NBA,” another spectator, Chen Pokong, 55, told the New York Post. “[China wants] to take away freedom of speech and now spread dictatorship to America.”

Local media report that some of demonstrators were ejected from the game for chanting.

Similar demonstrations have already been held at other games between American and Chinese teams. Earlier this month, during a match between the Philadelphia 76ers and the Guangzhou Loong-Lions, two people were asked to leave for holding signs in support of Hong Kong protests. –BBC

Meanwhile, a pro-Democracy NBA fan raised just under $43,000 in less than 48 hours to hand out “Stand with Hong Kong” t-shirts at next Tuesday’s Los Angeles Lakers season opener at Staples Center.

As we noted last week, Lakers star Lebron James drew the ire of pro-democracy protesters for saying that freedom of speech can lead to “a lot of negative,” effectively supporting China’s efforts to crack down on the protesters.

In response, Hong Kong activists have been burning LeBron James jerseys according to The Guardian.

The internet has not been kind to LeBron either: